Falcons Come Up Short Against Bucs | Takeaways From The Game 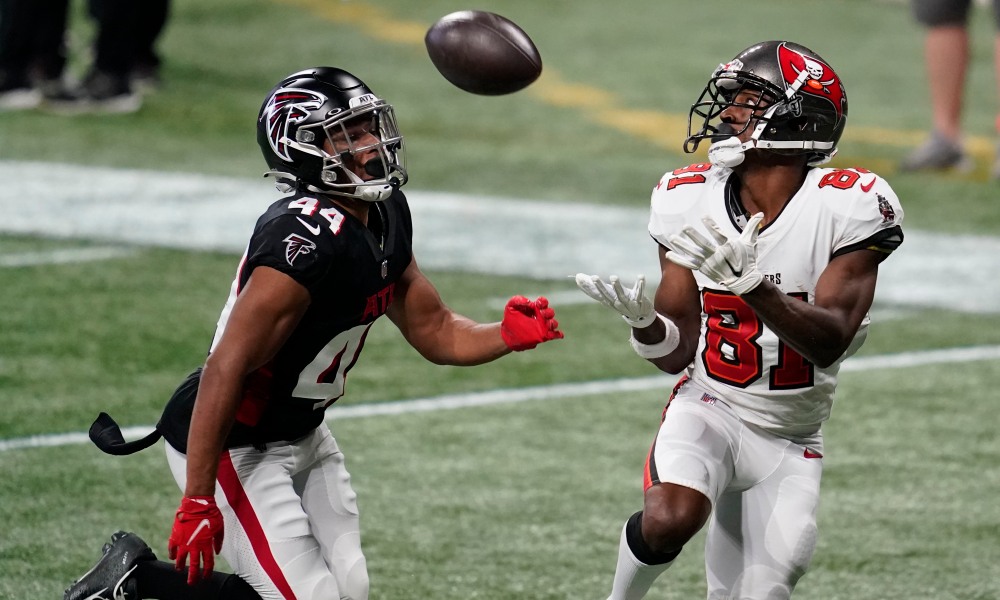 .Falcons Come Up Short Against Bucs

The Falcons came into Raymond James Stadium as big underdogs to the Tampa Bay Buccaneers. Coming off the six-point performance in week 1 to Philadelphia you could see why, but the Falcons showed some fight to be in the game until the fourth quarter where the Bucs would come out on top 48-25.

Atlanta fell behind by 14 quickly with Tampa’s juggernaut offense with the Brady to Gronk connection. It seemed that the week 1 woes for the Falcons were going to continue with Atlanta’s first three drives ending with two punts and a turnover on downs. However, Cordarrelle Patterson would cap a five-play drive with a 10-yard touchdown run for the team’s first touchdown of the season, and would be down 21-10 at the half.

The second half did not start so hot for the Falcons either as their first possession would end with an interception, and the Bucs would capitalize on the turnover to extend their lead to 28-10. Atlanta would fight back and score 15 unanswered points to only be down by three at the end of the 3rd quarter. However, the Bucs finished the 4th quarter with 20 unanswered points—including two pick six interceptions from the Buccaneers defense that made the difference in the game.

Matt Ryan finished 35-for-46 for 300 yards two touchdowns and three interceptions. Ryan had a personal achievement for having the most passing yards than any other player in their first 14 NFL seasons with 56,046 yards. Rookie Kyle Pitts looked more of what Falcon fans were looking to see with five catches for 73 yards, and even made a nice behind the back catch. Calvin Ridley even had a nice day with seven catches for 63 yards and a touchdown.

However, the defense had a long day overall letting Tom Brady get off for five passing touchdowns—two each to Mike Evans and Rob Gronkowski. The biggest issue on Sunday for the Falcons defense was losing second-year Cornerback A. J. Terrell with a concussion injury. There aren’t any moral victories in the NFL, but the Falcons showed some heart and put up a fight that can make fans feel a bit better.

Against a team like Tampa Bay, you cannot afford to make many mistakes. They are good enough to capitalize on them every time. Yes, Matt Ryan’s three interceptions were costly. Two of those going for touchdowns for Tampa. However, that wasn’t the only mistake that cost Atlanta. When Tampa Bay pinned Atlanta deep into their own territory,they went three-and-out. Punter Cameron Nizialek didn’t do much to help with a 30-yard punt that gave the Bucs a short field that led to a Tampa Bay touchdown.

Too Easy for Brady

Brady was 24-for-36 276 yards and five touchdowns. Although, the Falcons did sack Brady three times they couldn’t consistently get enough pressure on Brady. “You have to make them work to get down to the red zone, shrink the field, hopefully play good in the red zone, get off the field on third down.” Defensive Coordinator Dean Pees had to say after the game. While the defense didn’t do much of that. Brady took yards in chunks especially in the first half with 8.7 yards per pass attempt.

The Falcons cleaned up their play with less penalties with just six for 49 yards. They also finished three-for-four in the red zone. Still some things that must be fixed, but a nice improvement from week 1.

Cordarrelle Patterson had a rushing and receiving touchdown. Kyle Pitts had a better performance against Tampa and showed some flashes of what he could be in this offense.

Atlanta drops to 0-2 and has now lost seven straight dating back to last season. They will travel up to New York to face the Giants next Sunday.