Falcons Falls in Opener To Philadelphia | Takeaways From The Game 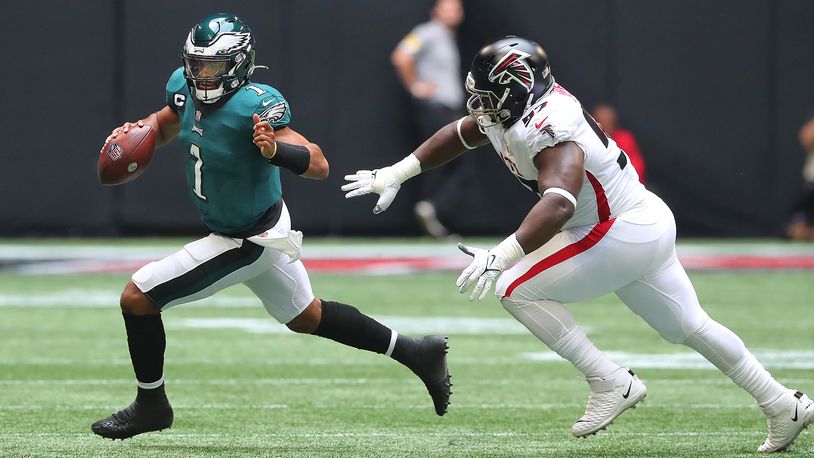 The Atlanta Falcons were looking for an opening season win against the Philadelphia Eagles under first-year Head Coach Arthur Smith. However, the Eagles had other plans as they would crush the Falcons 32-6.

Atlanta started out hot with a 15-play opening drive, but stalled inside the red zone and settled for a field goal to take a 3-0 lead in the first quarter. The Eagles would answer back with a touchdown on their opening drive to go up 7-3. The Falcons came right back with another long drive—15 plays to be exact, but failed to reach the end zone and settled for another field goal to cut the Eagles lead to one. Then the route was on by Philly right before the half.

Philadelphia would take a 15-6 lead at the half after Quarterback Jalen Hurts led the Eagles to another touchdown drive. The Falcons would go on to punt the ball four times and turn the ball over on downs twice in the second half. Matt Ryan had a rough game for the Falcons, completing 60% of his passes, but for only 164 yards and no touchdowns. He did not turn the ball over, however. Cordarrelle Patterson showed he can be a lightning rod for the offense, picking up over 7.5 yards per carry. However, a loss is still a loss. What exactly went wrong for the Falcons?

“I did a really poor job getting us ready to go,” Smith said, “That game is not going to define us. It’s a long season to go, but I certainly didn’t do a good enough job getting us ready to go today.” In the end, Atlanta had 12 penalties, that combined for 99 yards. The Eagles were never going to be an easy win, but fans certainly expected better.

Ryan was sacked three times—most of the pressure came from the interior. The previously mentioned Jalen Mayfield had his “Welcome to the NFL” game. He had to go up against Fletcher Cox and the Philly defensive line.

The regular season debut of Falcons first-round pick Kyle Pitts did not turn out the way he wanted as he was non-factor in the game only having four catches for 31 yards.

Defense Better Than Reflection of Score

The score may show that the defense may not have done anything, but in the second half the defense did hold the Eagles to five-straight three-and-outs and a couple of turnovers on downs.

A Run Game Was Present

Atlanta gained 124 yards on the ground—although 86 yards came in the first half it was good to see a team who’s been near the bottom of the league in rushing have a nice rushing attack.

Last year, Atlanta finished 26th in Red Zone efficiency struggling to finish drives with touchdowns and that was the case again on Sunday with those first two drives. Quarterback Matt Ryan went 21-for-35 and only 164 yards through the air. Wide Receiver Calvin Ridley led the team with five receptions for 51 yards. However, three of those receptions came on the first drive. Simply put this team has a lot of weapons. They should be getting more big plays, and scoring more than six points.

It doesn’t get easier for the dirty birds. They travel to Florida to face NFC South opponent and defending Super Bowl champion Tampa Bay Buccaneers. Tom Brady and the Bucs beat the Cowboys in Thursday Night Football last week. The Falcons will need to re-group and fix a lot of their problems fast, or else it could be ugly in Tampa next weekend.