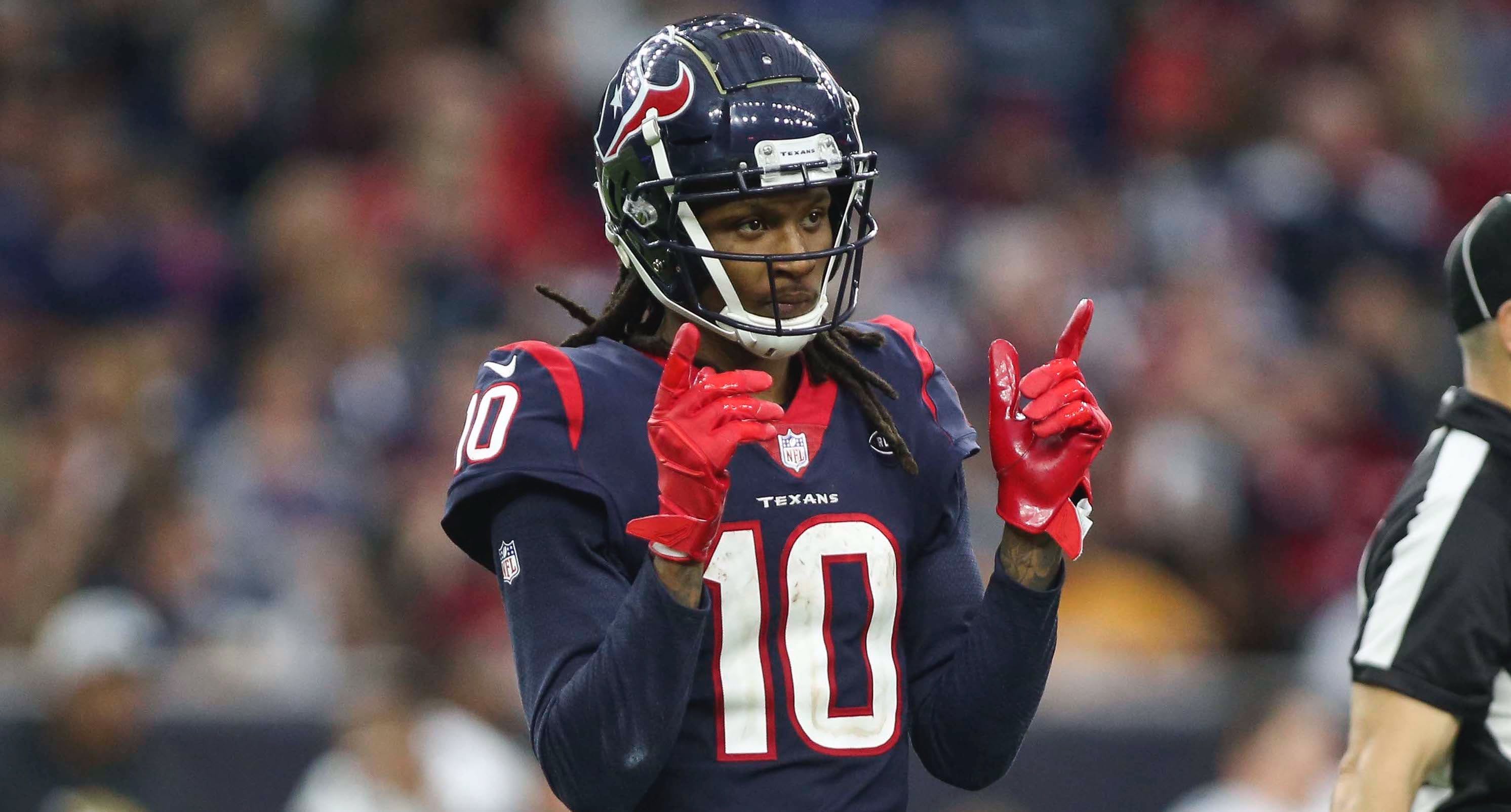 This point of the season is a sweet spot for fantasy football trading. We’re too far removed from drafts to hold on to your preseason valuations of players, yet it remains early enough that few teams are eliminated from contention. This is the perfect time for the 6-0 teams of the world to buy low on a slumping star, with the hopes of a turnaround come playoff time. On the other end of the spectrum, this is the point of the year when the glimmer of hope is just faint enough for desperate 0-6 teams to unload injured players for the sake of keeping their seasons on life support. League championships can certainly be won on draft night, however timely trading is often a more viable route to glory for those of us who didn’t draft the perfect team. Without further ado: I present my Week 7 buy low / sell high targets.

Hopkins entered the season as a consensus first round pick after finishing as a top five PPR receiver in three of the last four seasons. Entering Week 7, Hopkins ranks 15th among receivers which is respectable, however a bit of a disappointment considering how highly he was drafted. The main problem for D-Hop has been a lengthy touchdown drought. The Texans wideout has now gone five straight games without catching a touchdown. In the previous two seasons, Hopkins never went more than two games without a score. His target volume remains high (9.3 per game), and he’s in a strong offense. I would assume that positive regression is coming soon for his touchdowns.

Beckham also began the year with high expectations. The Browns offense as whole received a lot of preseason hype. After seeing what OBJ was able to accomplish with an aging Eli Manning throwing him passes, many owners dreamed big about what a young, promising Baker Mayfield could do for the wideout. The duo has struggled to find a groove thus far in Cleveland and as a result, Beckham is the 23rd ranked wide receiver. The upside, however, is still very much there. After 9 combined points between Weeks 4 and 5, many Beckham owners were likely ready to move on. Despite last week’s 16-point performance, OBJ’s four game TD drought entering the bye week may still present a good buy low opportunity.

Rodgers has not looked like his usual dominant self to start the year. We should keep in mind that he’s still adjusting to first year head coach Matt LaFleur’s system. One should also note that the packers have opened the season with four of their six opponents ranking top 10 in scoring defense. With favorable matchups against the Raiders and Chiefs looming, now is the perfect time to buy on Rodgers, before he heats up. A-Rod currently ranks as the 12th best QB in fantasy. Rodgers has finished as a top 10 QB in each of the nine full seasons he’s played, dating back to 2008. He’s finished in the top three for seven of those nine seasons. If somebody in your league has forgotten who Aaron Rodgers is, go out there and relieve them of their quarterback.

They couldn’t all be obvious candidates. After leading all tight ends in yards per catch, and yards per target last season, many expected Howard to take another step forward. The tight end has instead struggled mightily, accumulating just 13 receptions in six games with no touchdowns. His performance has been so lackluster thus far, that you can likely get him for next to nothing, if he hasn’t been dropped already. My faith in Howard comes from two factors. First: his strong track record over the last two seasons. Secondly, while he has failed to produce like an elite TE (ranked 30th) he is still getting snaps like one. Howard ranks 8th among tight ends in percentage of offensive snaps he’s played. Being on the field is half the battle, I trust that the talent of Howard will eventually shine through and he can produce in an offense with the 9th most pass attempts through Week 6.

Cooper Kupp has enjoyed a fantastic start to the season. His ranking as the 3rd best receiver is even more impressive considering that he’s coming off an ACL tear that ended his 2018 campaign after just eight games. 45 receptions for 522 yards and 4 TDs in six games for Kupp seems like the absolute best-case scenario. Brandin Cooks and Robert Woods should start to take a greater share of the targets moving forward. The regression may have already begun for Kupp, as he managed just 5.7 PPR points last week against San Francisco. If somebody was willing to give me Hopkins or OBJ for him, I wouldn’t hesitate to make the move.

I loved Godwin coming into the season, and I am thrilled to own several shares of him across my leagues. Much like Kupp, the third-year receiver appears to be having a monster breakout season. While I certainly couldn’t fault owners for wanting to ride the breakout and reap all the benefits of a guy who’s making them look like a genius, I’d be looking to cash in my chips. I believe that Godwin will wind up having a tremendous season, but I would prefer to flip him for a more proven asset if the opportunity presents itself. If you can turn him into Keenan Allen or Julio Jones, go for it.

You would have been able to sell higher if you’d made a move prior to Jones’ Monday night dud against the Lions, however, there is still room to get a return on your investment with the Packers’ RB. Jones enters Week 6 as the 6th ranked PPR back in fantasy. This ranking is in danger of falling over time as Jamaal Williams has seen his role in the Packers backfield increase over the last couple weeks. Go ahead and flip Jones while he has the numbers of a featured back. His value will take a major hit if the touches continue to trend toward a timeshare situation.

Skillset is not the concern here. Cook is a beast and I believe that his ranking as the 2nd Running Back is legitimate. The hesitation with Cook is, and always has been, durability. Cook managed to play only a combined 15 games in his first two professional seasons. Even if the running back manages to stay healthy for the full season, the Vikings may limit his workload down the stretch run when fantasy owners need him most. Cook owners may want to consider trying to acquire Ezekiel Elliot or Alvin Kamara, both of whom are ranked below Cook but should finish the season strong.

Jones and Murray Ready to Square off at MetLife
Game Preview: Giants and Cardinals