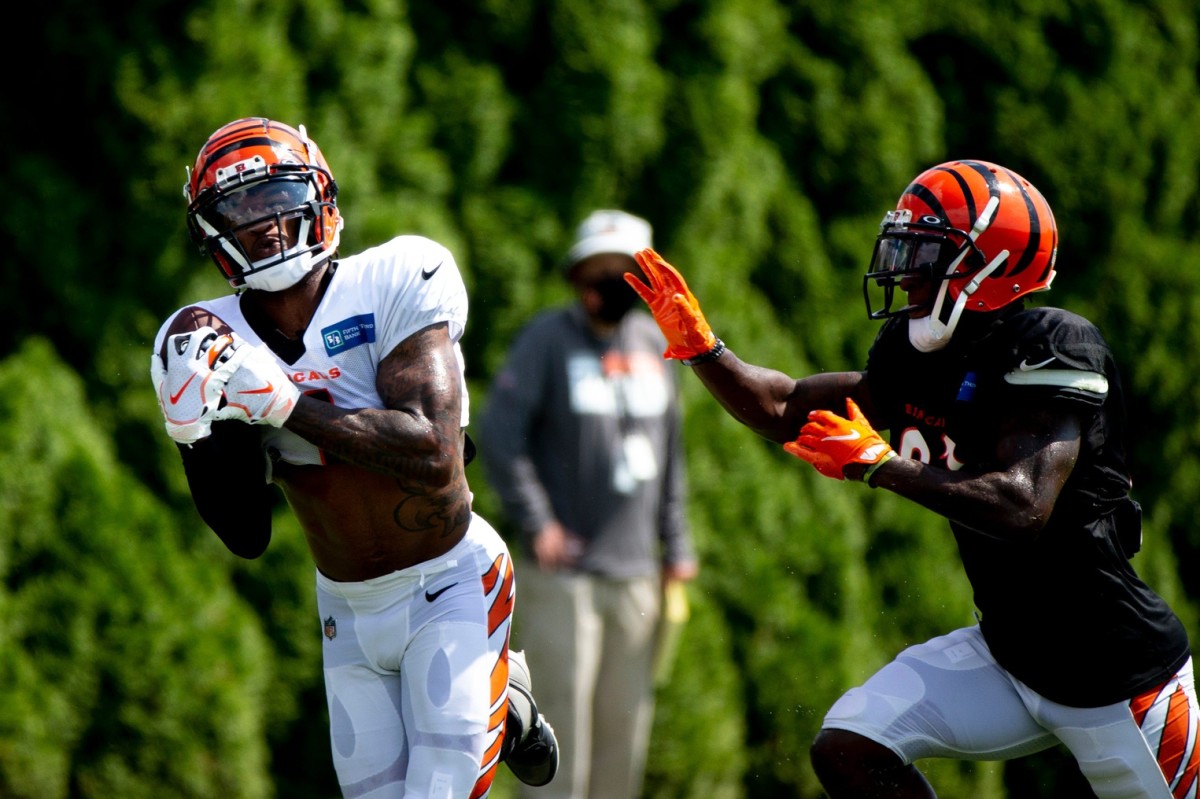 Kirk Cousins- The public perception of Kirk Cousins is very strange. Perhaps due to his terrible record in primetime games, he is not viewed as a high-level Quarterback. However, he was top 10 in touchdowns, in a run first offense ran by former Head Coach, Mike Zimmern. Incoming Head Coach, Kevin O’Connell was a former Quarterback who was the Offensive Quarterback for the Los Angeles Rams. One of the most dynamic, creative and pass happy teams last year in the NFL.

In Kirk Cousins best seasons as a Washington Redskin, he passed over 600 times a season. This was with a worse group of targets than he has now. This current group being Justin Jefferson, Dalvin Cook, and Adam Thielen, all past and present pro bowlers who were all great last season. This potential increase in pass attempts will nevertheless dwarf his average with the Vikings of 507 attempts a season. With the talent around him and a more dynamic offense with a coach that supports him can lead to fantasy greatness.

Trey Lance- Trey Lance is a player with high NFL Draft capital who was selected to be the future leader of the 49ers. With the imminent departure of Jimmy Garoppolo, the reigns have been handed over to Lance. Many question his ability throwing the ball as he played for a small school and has not always looked sharp in camp as a rookie.

With those who have questions surrounding his passing ability, it really will not matter. Jalen Hurts flashed great fantasy performances last year as a player who only threw 16 touchdowns for the season. This was due to his ability to scramble and score touchdowns through the ground.

In games that Lance played the entire game last season, he averaged over 10 rushes a game. Kyle Shanahan is known for his mind in the running game, and the rushing ability of Lance will certainly be utilized. This is one less attempt per game than the MVP season of Lamar Jackson from a few years ago. As a second-year player, his ability cannot be remotely compared to a former MVP.

However, this level of opportunity that can occur is immense and will create manufactured yards. In Fantasy football scoring, rushing yards are far superior to passing yards. Having mobile quarterbacks can truly elevate their performances, and while being drafted as the Quarterback 14, he has top 5 Quarterback ability due to his rushing ability.

Kareem Hunt- Kareem Hunt has had struggles with injuries with the Cleveland Browns. He has only played one full season and was incredible. Thirty-Eight catches, 11 touchdowns and over 1000 all-purpose yards. He has been on pace for over 200 touches the past two seasons in his shared role with Nick Chubb. While Chubb gets the majority of rushes, this offense could be turning more pass first with the arrival of Deshaun Watson.

There are questions to how much Watson will play this season. However, the ability of Hunt has been able to shine through while playing with average Quarterbacks. Hunt is currently being drafted as the Running back 33, while ranked 21st in points per game in PPR scoring last year. Do not be afraid of the timeshare, there can be enough points for both running backs.

Melvin Gordon- Ranked as the #18 overall Running back in fantasy scoring, the Broncos running back was 2.3 points and one spot behind teammate Javonte Williams. Gordon has become an afterthought in wake of the hype surrounding Javonte Williams. Williams is young, talented and will most likely have an incredible NFL career.

However, Gordon is not ready to roll over. During the offseason, avoiding superfluous chatter in preseason is usually the best option, however when said by one of the players, you tend to listen. Williams stated that he believes the offense will be “The way that we were last year, everything will be good, and we’re just trying to win games.” Having identical rushing attempts, a slide to 70% Williams seems unimaginable. Gordon also ran the ball very effectively last year and with an ADP of running back #36, he’s a sleeper with high end flex value.

Aaron Jones- The Packers are trying to find a way to win with the absence of Davante Adams. Adams was responsible for a 28.5% target share and 169 targets. The running back position usually benefits most from vacated targets. Last year the Lions lost 360 targets on their team. Deandre Swift saw 78 targets and Jamaal Williams was targeted 28 times. Despite playing in one less game than the year before, Swift increased his targets by over 20%. As well as going from 14th in running back targets to 6th this past year. What does this mean for Aaron Jones? Expect him to get the ball a lot, as he was already second on the team in targets. Jones and Adams were responsible for 90% of the completions in the Packers playoff game against the 49ers. He is the only all pro target with reigning MVP Aaron Rodgers at the helm. He is currently being drafted lower than we have seen in recent history as the Running back 14. He is an auto selection in the third round and has true #1 overall Running back upside.

Courtland Sutton- After the myriad of Quarterbacks he played with before, Sutton is poised to have a breakout Fantasy season. He is currently being selected as the 26th WR, however Wilson’s history and his ability, can make him a high end WR 2. Russell Wilson has shown his ability to support multiple Fantasy targets, all while playing in a run first system. Last year, Sutton struggled to receive targets, however he still produced spike games whenever given the opportunity. Sutton was 2nd in the NFL in air yards per target. This being the distance between the line of scrimmage and where the pass is intended. This is a remarkable number, and we have all seen the way Wilson can throw a deep ball. Last year, in an offense that did not move the ball frequently, Sutton was still a weapon in the offense. Given the arrival of future hall of famer Russell Wilson, I believe these numbers skyrocket, giving Sutton top 10 WR potential.

Kadarius Toney- There are many questions surrounding how Toney will be able to handle his early injury woes. However, there are no questions to the talent he has. In 9 games, Toney had over 9 targets in four of them. This included two games of 12+ targets. He was absolutely dynamic after the catch; this included an absolutely monstrous week 5. He had 189 yards, 7th in the league for single game yardage performances. He has the ability only guys like Ja’Marr Chase, Tyreek Hill, Davante Adams have to hit this type of mark. As they all had games of over 185 receiving yards.  No team in the NFL has spent as much on the Wide Receiver position as the New York Giants. However, the other top solidified targets had one passing touchdown combined last year and have both struggled to stay on the field. While Toney is not a safe choice, being ranked as the WR 46 with this type of upside is too enticing to look past. He is a current 11th round pick that has the ability to instantly win you a week.

Mike Williams – Being on the team of the #2 QB for 2021 Fantasy is always beneficial, along with being his deep threat at 6’ 4”. Mike Williams was inconsistent last year, yet still ended up a WR 12 as he had spike weeks of 30 twice in the first 6 weeks. He is currently being drafted as the WR 19, however I believe his ceiling is a top 5 fantasy WR. While being the second option on his team target wise, he is the clear red zone threat and has made big plays throughout the season. He was 6th in the NFL in end zone targets with 16, but he was only able to haul in 5 of them. A couple of these plays going the other way can put Williams in elite company. He will be involved as he was top 12 in targets in the league and is a fixture in one of the best offenses in football. This place in the offense is cemented by a new 3-year, $60 million deal. Williams has been a consistent selection of mine in the 5th round, as he can serve as a flex in many cases, allowing you to take full advantage of these week winning performances.

Hunter Henry- Henry was able to find the ball in the endzone 9 times last year, as much as any other Tight End in football. Touchdown regression is a fear in low target high touchdown players. However, this role as a red zone target for the Patriots is solidified. He was 7th in red zone targets last year. With a 52.9% catch percentage in these scenarios, this number can easily go up next year. The remaining pass catchers on the team are newly acquired Davante Parker, Nelson Agholor and Jakobi Meyers. All players with inconsistent performance that added up to seven touchdowns last year in their respective situations. Mac Jones showed he can conduct a productive NFL offense on the 11th highest scoring team in the NFL.

Gerald Everett- Everett has always been a solid streaming Tight End as he developed with the Rams with Tyler Higbee and his last season with the run first Seattle Seahawks. Due to his circumstances and fellow receiving threats, he has not been given the volume of a high-end Tight end. However, his new home is with the Los Angeles Chargers. A team who threw the ball the third most in the NFL, including 82 targets for an at the time 34-year-old Tight End. Everett was signed as his replacement, and he is an immediate upgrade in athleticism and ability. With one of the best quarterbacks in the NFL getting him the ball, Everett can have truly quality targets. The competition of the Chargers receiving core does not concern me, as the same group still allowed 82 targets to Jared Cook. Currently ranked as the TE 21, Everett will be a late round undrafted selection. However, with his ability and situation, he can be a top 10 Tight End for virtually no draft cost.