Is Chase Elliott the Championship Favorite? 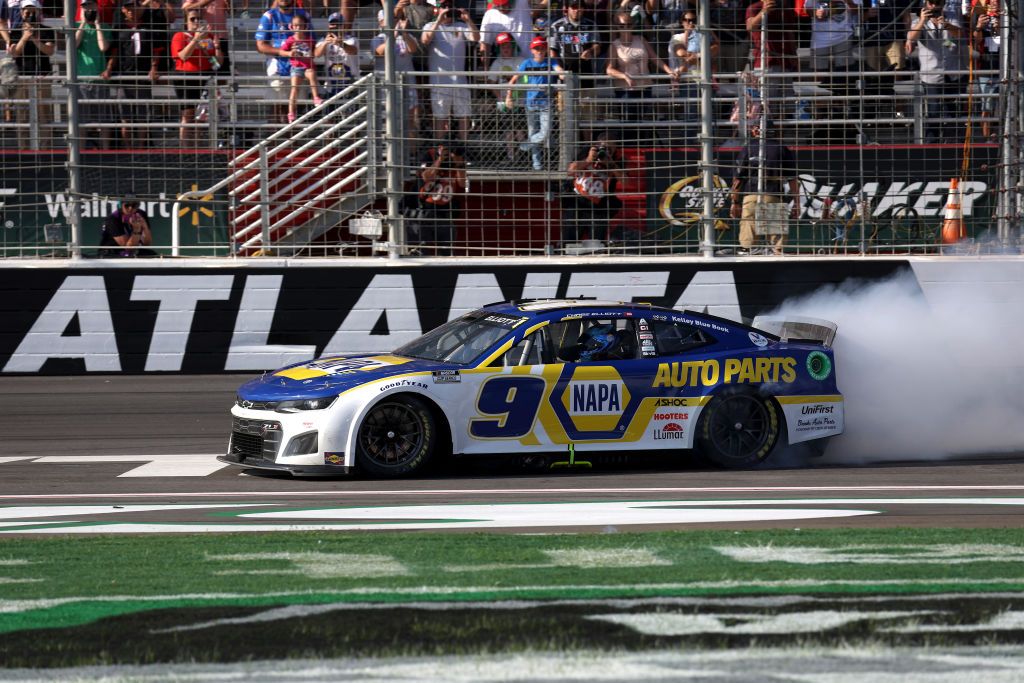 This past weekend, we saw  Chase Elliott, conquer Atlanta for the first time in his cup career. Elliott, the Dawsonville GA native, has made 8 previous starts at Atlanta but has never found success at his home track. Elliott’s previous best finish at Atlanta was 5th, in 2017. This was Elliott’s second win in the last three races, and the third of the year. This brings up the question: Is Elliott possibly the Championship favorite?

Why Could Elliott be the Favorite?

It’s no secret that Elliott is a very talented racecar driver. He caught the attention of Dale Earnhardt Jr when his early career was starting, which eventually led him to land a Cup ride with Hendrick Motorsports. Elliott has already won a Cup Series Championship back in 2020, with a career-high 5 wins in a season. So what makes this season different than his 2020 championship season, up to this point? As of Atlanta, which is the 19th race on the schedule, Elliott holds the points lead. Elliott also has a better average finish of 10.8 this season, compared to 13.7 after 19 races in 2020.

This season has been like no other. Kyle Larson hasn’t had the consistency as he did with his championship performance last season. Trackhouse Racing has been bringing fast cars every race. Denny Hamlin has not been as consistent as he has been over the past few years. Joe Gibbs Racing has not been as fast as fans were expecting. This season has featured 5 first-time winners, so it has been one for the ages. Elliott’s closest competitor in the regular-season points, is Ryan Blaney, 47 points behind. Blaney is followed by Chastain and Larson in the points. Elliott has to keep the consistency and the attack on his competitors up.

How Chase Elliott could lose the 2022 Championship

The blunt reason is that Elliott could be eliminated from championship contention due to the NASCAR Playoff system. The playoffs take place over the last 10 races of the season. There are three rounds in the system, with three races each in the rounds. The top 16 in points will initially start the playoffs but will wind down to 4 drivers throughout the playoffs, which set up the championship race. The last race of each round eliminates the bottom four in points. Many drivers are locked into the playoffs by winning a race during the regular season. This system has proven that no one is safe from being eliminated throughout the 3 rounds of the playoffs. For example, Kyle Busch, who was eliminated in Round 2 of the 2020 playoffs, had won the championship the previous season.

Unless something drastic happens to Elliott, he should not have much to worry about throughout the playoffs. This season has proven that anyone can win at this level. As previously stated, there have been 5 first-time winners in the Cup Series, up to this point in the season. Any of these drivers could make the Championship 4 at the end of the season. This is the unpredictability of this system and this sport. Anyone could make it in, no one is safe with this format.

Why Chase Elliott will win the 2022 Championship

What’s the main reason that Chase Elliott will win the 2022 Cup Series Championship? Simple. He’s in the best equipment, and quite possibly the best car right now. All 10 tracks in the playoffs suit his driving style. He has won on 5 of the 10 playoff tracks, so there are plenty of opportunities for him to lock himself into the next rounds and the championship race. In Elliott’s 2020 Championship season, Elliott won the final 2 races of the season to clinch his first Cup championship. Martinsville, the 2nd to last race of the season, is one of Elliott’s best. Phoenix, the Championship race, is one of Elliott’s best. Elliott has shown that he can run up front and be consistent. So why not Elliott?