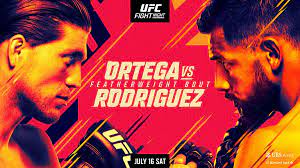 UFC on ABC 3 looks to deliver with another banger at Featherweight as Brian Ortega takes on Yair Rodriguez. Both fighters may be coming off losses, but have been fighting the toughest in the division. Ortega most recently losing to current champ Alexander Volkanovski, and Rodriguez losing by decision in a war with title challenger Max Holloway.

Yair Rodriguez became a household name after a last second elbow KO of Korean Zombie in 2018. Most recently he lost to Max Holloway in a back and forth all action affair in November of 2021. Rodriguez possesses a solid striking game that gave Holloway, the best boxer at Featherweight, a challenging match-up. In both fights, win or lose, he has shown that he his can be dangerous late in the fight.

Ortega most recently lost by decision in a title fight against Featherweight champ Volkanovski. In spite of losing a one-sided affair on the feet, he still proved dangerous throughout the fight with two near fight ending submission attempts in the third round.

Ortega has always been known for his skills on the mat, but has shown an improved striking game in a dominant win over Korean Zombie. Unfortunately, this was ineffective against the more agile Volkanovski.

What may prove most problematic for Rodriguez is his takedown defense. Against Holloway, someone not known for takedowns, he was taken down at ease. This will not fair well for him against a Jiu-Jitsu ace like Ortega. What makes this fight so exciting is that no matter the score, both fighters have the ability to turn the tide: Rodriguez by KO or Ortega with a submission.

UFC on ABC 3 is this Saturday with the preliminary card beginning at 11am EST on ESPN/ESPN+. The main card begins at 2pm EST on ABC/ESPN+.

Change is Coming to the Atlanta Falcons
Should the Brooklyn Nets Run it Back?