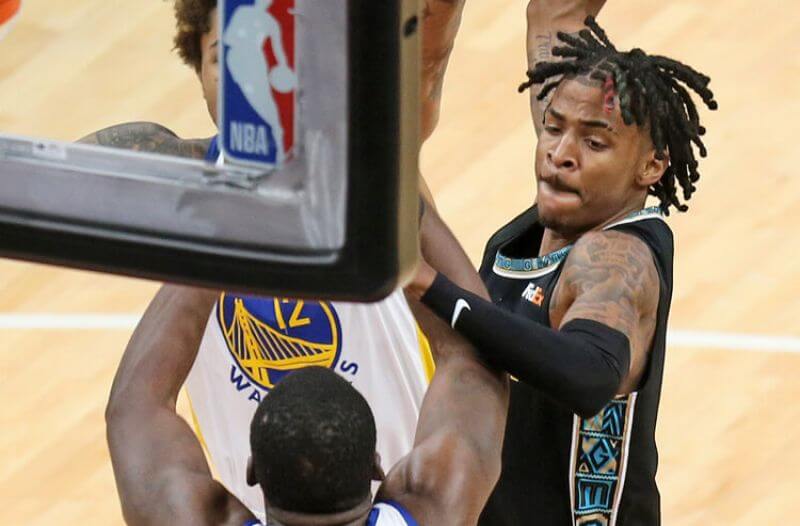 There’s a multitude of factors one could point to as the cause of the Grizzlies’ disappointing 116-103 loss to the Golden State Warriors on Friday. As of recent, Memphis has displayed a disappointing tendency to play down to their opponent’s level, evidenced by a series of losses to subpar squads like the Dubs and the Oklahoma City Thunder. The Grizz were also unable to get even a sniff of a rhythm from downtown, shooting a horrid 30.8% from three. Even the team’s usual playmaking consistency was hampered, turning the ball over nearly once per every assist.

However, just like in the real world, most basketball problems have a greater underlying cause. These causes take a variety of forms, from fatigue to roster problems to simply getting psyched out of one’s shoes. In this case, the Grizzlies fell prey to an excellent, if not untraditional gameplan on the part of Steve Kerr. Though Kerr’s been working with top-heavy rosters for most of his career, Friday’s game proved he’s more than worth the big bucks, maneuvering a depleted Warriors team to a gritty, yet tactical victory.

So, how exactly did the Warriors manage to snatch away victory from the jaws of a surefire defeat? Well, they zigged where other defenses were zagging. When attempting to cover the Grizzlies, most teams prioritize cutting off Ja Morant’s driving abilities. As the Grizzlies’ leading scorer and a former Rookie of the Year, it’s a natural intuition to wall off 12 and let the team’s ancillary scorers try and beat you. However, Memphis has been facing this all year, developing counters to coverages that siphon the ball out of Ja’s hands and scheming out ways to win that don’t involve Morant as the team’s leading scorers.

Instead of cutting off Morant, however, the Dubs sold out to stop Grayson Allen from shooting threes. The reasoning behind this is simple: cut off Allen’s threes, and the team’s entire spacing collapses, as the group of Kyle Anderson, Morant, Jonas Valanciunas, and Dillon Brooks have only been shooting 30.7% from deep on average. While Allen made 66% of his attempts from deep on Friday, once you realize he only attempted three triples, suddenly that number doesn’t look as enticing–especially taking into consideration the fact that none of the other starters cashed in from downtown even once.

Check out what this allowed the Warriors to do. On the play below, the Dubs leave both Morant and Brooks open from three one pass away. Though Kevon Looney unwisely commits a foul here, the lack of concern surrounding the Grizzlies’ other shooting threats allows the Dubs to put three bodies on Valanciunas, making up for their lack of bodies at the center position.

In another twist to make up for their lack of bigs, the Warriors didn’t just blitz the pick and roll ball handler, they also blitzed the screener at times. One of the benefits of throwing out Draymond Green at center is that defenses can utilize his perimeter defense in order to throw multiple bodies at their opponent’s bigs. Here, Draymond spurts out to contest the Tyus Jones attempt, while Brad Wanamaker and Damion Lee stand guard, ready to collapse onto Brandon Clarke in a moment’s notice.

Even when tasked with guarding bigger opponents, Draymond delivered a classic performance in the first game of the baseball series. In the sequence below, watch him collapse in from the corner, signal Andrew Wiggins over to the corner, and then perfectly plays in between Anderson and Valanciunas to pick up a block.

This play clearly stuck in Anderson’s head. Not even a minute later, he got so preoccupied by Green collapsing from the corner that he forgets that Wiggins is defending him, allowing the Canadian phenom to come away with a steal.

Again, as in life, one isn’t measured by their problems so much as the way they respond. As such, Taylor Jenkins and company have to be applauded for how they bounced back, neutralizing nearly every threat laid out by the Warriors’ gameplan. For one, the non-Allen starters were able to hit seven combined threes, a mark that’s well above average for that foursome. As such, the Dubs’ defense was stretched out by Memphis’ hot shooting, not allowing them to collapse as much when facing mismatches on the interior.

Furthermore, the Grizzlies were ready to respond in the scenarios where the Blue and Gold were able to send multiple bodies at their bigs. In the set below, the Warriors throw Wiggins and Kent Bazemore on Clarke. Instead of remaining stationary like many of the Grizzlies’ shooters in the first leg of the series, Justise Winslow recognizes the opportunity to cut from the weak side and pick up an easy two points.

On the other end, the Grizzlies were able to limit the Warriors’ ball movement, a key tenet of their offense. The Dubs are leading the league in assists, so transition defense like the following Justise Winslow sequence played a key role in limiting Golden State to only 103 points off 23 assists, nearly five assists below their per-game average.

After a stretch of four games against top-six rated defenses, Memphis’ upcoming matchup with the Boston Celtics has to seem like somewhat of a relief. Though Jaylen Brown just dropped ten threes against the Orlando Magic (which has to bring forward some terrifying flashbacks for the Grizzlies’ roster), the Celts have lost three of their last four games, and are allowing teams like the Sacramento Kings and Cleveland Cavaliers to coast to 100+ point performances. Expect a barn burner in Memphis’ last leg of a four-game homestand at the Forum.

What the Lakers Must Do W/ James and Davis Out
The Man to Man Podcast Episode XVI: All The Slippers Fit