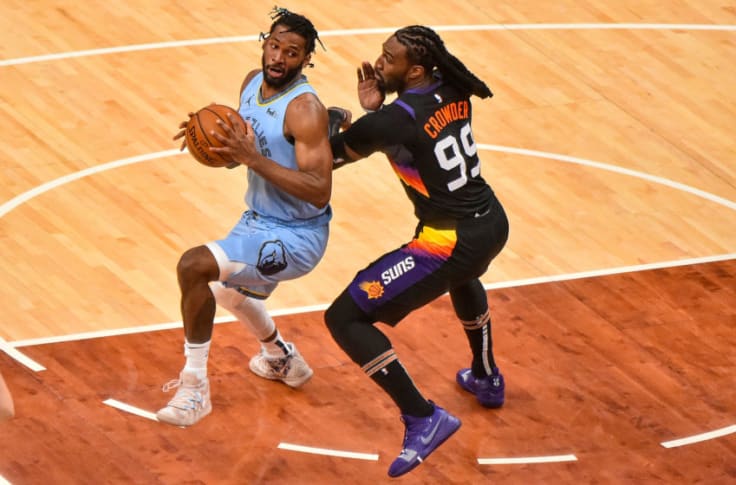 After over a year’s worth of anticipation, Justise Winslow finally made his debut as a member of the Memphis Grizzlies on Saturday. It’s clear that while both fans and media members were excited about his return, his teammates have been especially itching to encourage Winslow through his debut. Even though the Grizzlies dropped their most recent game to the Phoenix Suns by over thirty points, you would’ve thought they were on the positive side of a beatdown given the tone around the locker room. There’s a lot to be excited about upon Winslow’s return, but after one game, it’s important to be realistic about what the sixth-year veteran can bring off the bat. Let’s take a dive into the film of Winslow’s debut in Beale Street Blue and take stock of how he’ll both help and hurt the team’s chances.

The first thing that stood out during Winslow’s performance on Saturday was his impressive defense on Devin Booker. When it comes to perimeter defense, the Grizzlies have done a good job pairing athletic defenders such as Dillon Brooks alongside players like Kyle Anderson who utilize their length to disrupt opponents. Winslow might be the only player on the roster who’s able to effectively bring the best of both worlds. Watch as he leverages his athleticism to stay parallel with Booker on a series of ball screens, then takes advantage of his 6’10” wingspan to contest the stepback.

It’s often when Winslow’s in recovery mode that he’s the most dangerous. Cam Johnson gains a step on the Blue Devil in transition, but it doesn’t matter when Winslow can erase shots at the rim with such precision.

Another immediate value Winslow brings to the squad is his positional versatility. Though he checked in at shooting guard, Winslow gradually progressed to some minutes at the three, before finishing out the game with a stretch of minutes at power forward. With his 6’6” frame, I’m stoked to see the ways Taylor Jenkins will use him and Kyle Anderson as a pair of Swiss Army Knives, opening up the floodgates for Memphis to pump out some of the most versatile lineups in the league. What’s more, in my postgame conversation with Taylor Jenkins, he noted that he’s amicable to putting the ball in Winslow’s hands even more going forward, potentially hinting that we may see some Point God Justise in the near future.

I feel like I’m cheating with this category, but Winslow’s willingness to shoot from the three inspires some mixed feelings. I do like that he made a conscious effort to look for his shot from three–it’s rare that a player has the confidence to bet on themselves despite missing over a year’s worth of basketball. However, I don’t feel great about putting this in the Good tier given my concerns about his shooting form (more on that later), and that Winslow made only one of his four attempts. Still, Winslow’s a smart player. I’m more than willing to give him the benefit of the doubt that both of these could improve in the immediate future.

I’m willing to cut Winslow some slack for his lack of playmaking upon his return, but given that he played major minutes at point guard in Miami, I was admittedly expecting a little more from his passing. The Grizzlies have been great at getting each other open looks this year (they lead the league in assists per game), and rolling out a player who doesn’t pick up an assist in 21 minutes of play could jeopardize the team’s ball movement.

That being said, I think Winslow’s struggles reflect him learning how to play with his teammates rather than unwillingness to spread the ball around. Take this pick-and-roll play as an example of Winslow’s first-game playmaking blunders. He dribbles directly into Gorgui Dieng’s space after separating at an awkward angle, only to immediately telegraph the pass to a cutting John Konchar (Booker is already swiping at the ball before it leaves Winslow’s hands).

Errors like this make sense given that Winslow’s had very little time to get accustomed to his teammates’ habits. With a few games under his belt, expect Justise to start cutting down on turnovers and begin to emerge as one of the Grizzlies’ leading facilitators.

The one true red flag from Winslow’s efforts in his Grizzlies debut was his shot selection. Don’t get me wrong, some of Winslow’s misses came on good looks at the rim, but too many of his misfires occurred through ill-advised attempts to get his shot going.

This postup might’ve been my least favorite play of Winslow’s time in a Grizzlies uniform. He’s got a significant size advantage over Cameron Payne–while I like the pass back to McDermott to try and secure better position for the postup, there’s no reason to throw up a triple-teamed jumper with 10 seconds left on the shot clock.

To his credit, Winslow improved his eye for post looks over the course of the game. He puts Jae Crowder in the spin cycle here to great success, actually moving his defender this time in order to create space for this layup.  That’s more like it!

While his low-post game already seems to be on the mend, Winslow’s shooting form looks to have changed slightly in his time away from the court. I’m specifically concerned about the release point of the shot–Winslow lets this one fly from right above his eyes, limiting the energy transfer of his shooting motion and making his jumper more susceptible to getting swatted into row 12.

Compare this to his shot in Miami, where even though the off-hand stays in a similar position, the shooting motion is noticeably smoother and the release point is high enough so that Kuzma can’t bother him.

All in all, Grizzlies fans have to be excited about the skills Winslow brings to the table. Though he’s still getting acclimated to playing alongside his teammates, it’s clear that Winslow has forged a strong bond with the team away from the court. “[The team’s] been nothing but supportive”, said Winslow after the game. “I’m very thankful.  We’ve got a great group of guys and they really care about me as a player and a person.” Now that he gets to take the floor with the rest of the team, don’t be surprised if the rapport between Winslow and his teammates leads to rapid improvements.