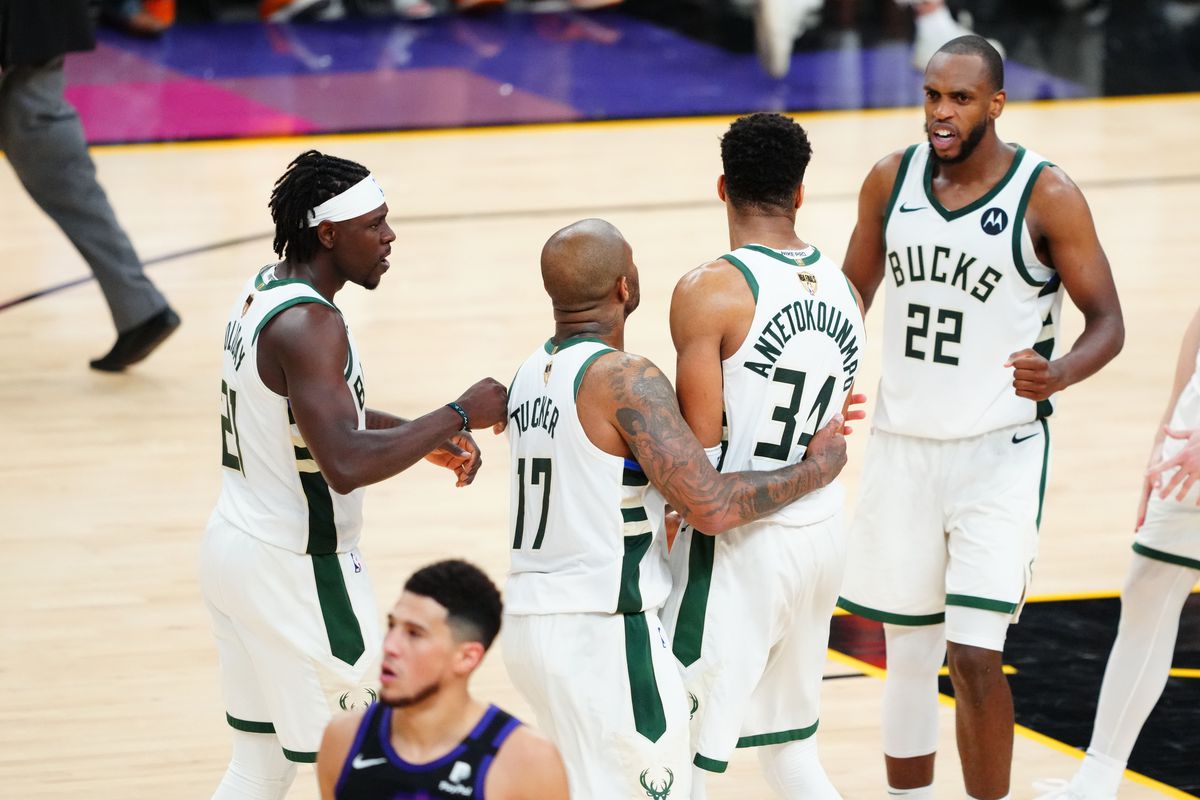 The Milwaukee Bucks are just one win away from their first title since 1971 after they defeated the Phoenix Suns 123-119 on Saturday. An extraordinary all-around performance from the Bucks big three, Giannis Antetokounmpo, Khris Middleton, and Jrue Holiday, each scoring 27+ points in Game Five. These three have had huge impacts on both ends of the floor, and while Giannis is the talk of the town for Milwaukee, they are each vital to their Finals success. Here are the Finals MVP cases for each of Milwaukee’s Big Three.

Khris has had a strange playoff run this year in terms of consistency. In the first three rounds, he would typically only perform well during home games. Against Brooklyn, Middleton averaged over 30 points per game on 53.6% shooting at home. However, when they traveled to Brooklyn, Khris averaged only 19.5 points per game on just 33% shooting. This inconsistency from him has fortunately not been the case in the NBA Finals.

Khris averages 25.4 points, 6.6 rebounds, and 5.4 assists through the first five games against Phoenix and has now had back-to-back 25+ point outings for the second time in his playoff career. His shooting numbers at home vs. away are almost identical (44.6 and 44.7). The scoring for Khris has continued to improve throughout the series, and his clutch gene has always been active. Middleton played all twelve minutes of the fourth quarter in Game Five, where he knocked down three of his five shots and tallied nine points to help the Bucks come out victorious.

Middletons continued clutch play and excellent scoring has undoubtedly helped surge Milwaukee’s comeback from being down 0-2. He has a very compelling case for Finals MVP.

Holiday has also had a rough playoffs, and this series has primarily been tough on him scoring-wise. The former all-star is averaging 17.6 points per game on 39.3% shooting for the series. But, despite the scoring, Jrue has had an incredible impact on both ends of the floor.

Holiday had the game of his life on Saturday in the most crucial game of the series thus far, scoring 27 points on 60% shooting while logging 13 assists. He also had one of the most clutch steals in finals history in the final 20 seconds against Devin Booker, which led to the dagger alley-oop to Giannis.

“He trusted me,” Giannis Antetokounmpo told reporters on Holiday’s alley-oop pass. “He knew I was going to finish the play, and that says a lot to me.”

His playmaking and defensive impact were crucial to Milwaukee’s three-game winning streak in the NBA Finals. When Jrue is the primary defender on all-star Devin Booker, Booker shoots just 9-25 (36%) and 2-9 from three (22.2%). Holiday’s finals MVP would be reminiscent of Kawhi Leonard’s in 2014, as they were both tasked with defending the opposing team’s best player and holding them to below-average percentages.

Without a doubt, the Greek Freak is the clear-cut favorite for Finals MVP if the Bucks win the series. Giannis is averaging a series high in points per game (32.2), a team-high in rebounds per game (13.0), and has given fans some of the best plays in NBA Finals history. From his clutch block on Deandre Ayton to his superhuman alley-oop from Jrue Holiday, there seems to be no stopping Antetokounmpo in this series.

There was fear that Antetokounmpo wouldn’t play in the Finals after he suffered a knee injury in the Conference Finals, or he at least would be extremely limited. But Giannis was ready to suit up in Game One and looks healthier than ever in the Finals.

Giannis is cementing his legacy as one of the all-time greats with his dominating performance this year that could finally give him that illustrious title. If he continues his remarkable play, then the Finals MVP is practically his.

USA Basketball Won Their Last Exhibition, But Is There Reason to Worry?
One Stop Podcast Episode 13