Five Players to Watch Out For In The Play-In Tournament 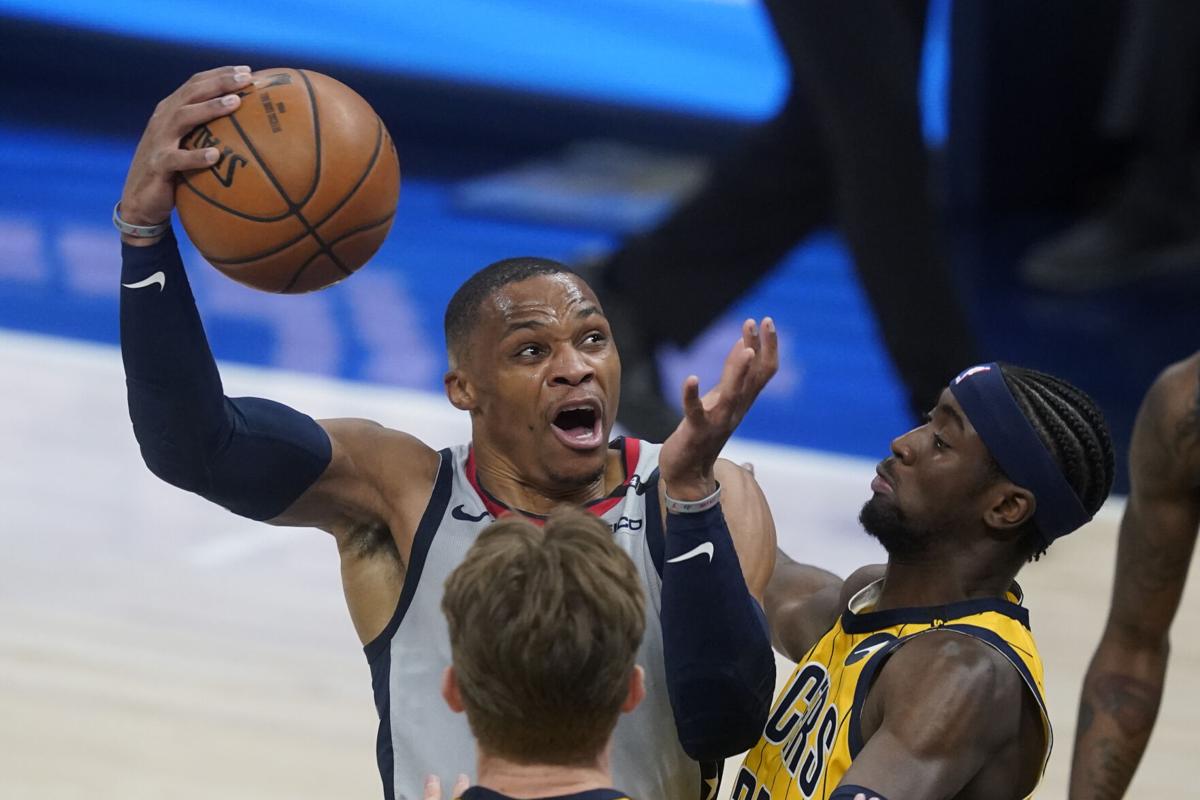 With the first-ever NBA Play-In tournament being just under three weeks away, some teams are working hard for a final push to earn their way in, while others are doing everything possible to make sure they avoid it. The Play-In tournament was introduced this season after a play-in game was implemented last season if a nine-seeded team was within four games of the eighth seed. In this format, the Memphis Grizzlies (the nine seed) had to defeat the Portland Trail Blazers (the eighth seed) two times in a row, whereas the Trail Blazers only had to beat the Grizzlies once to secure that final playoff spot.

This season, however, the NBA has introduced a new format, moving away from the idea of a singular series and towards a tournament format. Taking place on May 18-21, the 7-10 seeds in each conference will face off competing to clinch their spot in this year’s playoffs. The 7 and 8 seeds will face off first in a one-game series, with the winner securing the seven seed. The 9 and 10 seeds won’t be playing for a spot in the playoffs yet, as they will have to win this first game, then defeat the loser of the 7-8 matchup if they want the eighth seed.

No matter which teams face off in this monumental tournament, it is inevitable that these games will be must-watch basketball. These teams will be playing their absolute heart out, making sure they get the respect that they believe they deserve. Although we don’t know for sure which teams or which players will be participating in these games, there are some players that people need to keep their eyes on by the time these games Tip-off.

Starting out is the only guy on the list who has experience playing in last year’s play-in game in the bubble. Ja Morant and the Memphis Grizzlies currently hold the 9-seed in the Western Conference with a 35-33 record. Morant has been having a stellar sophomore season, leading the Memphis Grizzlies in scoring (19.2 PPG) and assists (7.3 APG). Known for his quickness on the court and showstopping dunks, Morant also has the ability to take over the game whenever needed. He’s had seven games this season when he has scored over 30 points, and in the Grizzlies season opener, he scored a career-high 44 points against the San Antonio Spurs. Morant’s ability to take over a game was also showcased in last year’s play-in game against the Trail Blazers, as he scored 35 points in a heartbreaking 4-point loss. With the chance of participating in this year’s play-in tournament being high for Ja and the Grizzlies, it’s for certain that he’ll be entering these games with a massive chip on his shoulder. The desire to not let down his fans two seasons in a row makes Ja one of the last players you would want to meet in the play-in tournament.

Next up is one of the newest members of the Indiana Pacers, added to the team as a part of a 4-team trade that saw James Harden become a Brooklyn Net back in January. Caris Levert has never been the number one option on any team he has been on so far in his young NBA career. He started the season coming off the bench for the loaded Brooklyn Nets team that saw Kevin Durant and Kyrie Irving stealing the show. Then he was traded to the Indiana Pacers, where many fans regard the double-double machine Domantas Sabonis as the face of the Pacers. Even during the earlier stages of his career, Levert saw himself as somewhat of a forgotten sidekick to D’Angelo Russell during his short stint with the Nets. However, this is what makes Levert so dangerous, his ability to catch his opponents and fans by surprise with his underappreciated ability to score the basketball. Last season presented the perfect example of this, as Caris Levert single-handedly defeated the Boston Celtics, scoring 51 points in an overtime win at TD Garden. Out of Levert’s 51 points, 37 of them came in the 4th quarter and overtime. Throughout this season, Levert is averaging 20.1 PPG off of 44.4% shooting and has gone for 20 points or more in 22 of his 44 games this season. Levert and the Pacers currently hold the nine spot in the East with a 32-36 record and will more than likely participate in the play-in tournament, which is a scary thought for opposing teams.

Ok, this one seems a little obvious, but it’s hard not to talk about the season the two-time MVP, and three-time NBA champion is having even with the struggling Warriors team. Let’s see, so far this season Curry has won the three-point contest, led the league in scoring with 31.9 PPG, broke the record for 3’s made in a single month with 96 made in April, and has gone for 50+ points three times this season, one of them for a career-high 62 points. Even though it’s been a very underwhelming season for Curry’s Warriors, some fans would say that their performance has exceeded their original expectations. When it was announced that Klay Thompson would miss his 2nd straight season with a torn Achilles, fans expected the team not to be much better than the previous season, where they finished last in the western conference. However, Curry and the Warriors seem to be playing with a chip on their shoulder this year and seem to be playing with the mindset that they have nothing to lose. This makes them such a dangerous team and one that teams want to avoid in the play-in or playoffs at all costs. Curry and the Warriors currently hold a 36-33 record and sit at the eighth seed in the west. Steph Curry can light up the scoreboard whenever he chooses to do, making him one of the last people other teams in the west want to see come play-in time.

Next up on the list is another former MVP and triple-double machine, Russell Westbrook. Overall, the Washington Wizards have had a pretty underwhelming season; they started the campaign with one of the worst records in the NBA, but over time have started to get things rolling. They’re right on the edge of the play-in, sitting at the ten seed with a 32-37 record. Fans have placed a lot of the blame for the Wizards’ struggles on Westbrook, stating that fellow star guard Bradley Beal has been carrying the load for the team. What fans are forgetting to recognize is that Westbrook looks just as dominant this year as he did in his MVP season. Westbrook is averaging 22 PPG, 11.6 RPG, 11.6 APG and has tallied 36 triple-doubles this season. Now I know that this team’s record doesn’t lie, they haven’t won a lot, but they have shown that they can win big games many times throughout this season. Back in January, the Wizards came from behind in the final minutes to stun Kevin Durant and the Brooklyn Nets 149-146. Russell Westbrook went off for 41 points during this game, ten rebounds, eight assists, and hit the go-ahead 3 with 4 seconds left on the clock. Westbrook and Beal are a very dangerous and underappreciated duo that can do some damage in the play-in tournament, so don’t be surprised if you see them in the playoffs as an eight seed.

When you think of the Charlotte Hornets, you most likely think of Lamelo Ball. There’s no problem with that at all; he’s having a fantastic rookie season, but don’t let this distract you from Terry Rozier. In a season where Lamelo Ball is the center of the spotlight, Terry Rozier has been quietly having the best season of his career. This was showcased from the first game, as Rozier went for 42 points on opening night. He went on to go for 41 points a couple weeks later against Minnesota, and set a new career high earlier this week after going for 43 points against the New Orleans Pelicans. Rozier has also added six other games where he has gone for at least 30 points. This season he is averaging 20.6 PPG, 4.3 RPG, and 4.2 APG while helping get Charlotte back into the playoff picture for the first time since 2016. Now the Hornets will more than likely have to make it through the play-in tournament first, as they sit with a record of 33-35 with the eighth seed in the east, but they are one of the teams that fans have the most confidence in during these games. This year Terry Rozier has proven many times that he can win a game through his ability to score a basket and close a game as he has hit a few buzzer beaters for the Hornets. Assuming that the young core of Lamelo Ball and Miles Bridges stays healthy and that star forward Gordon Hayward returns come play-in time, Rozier and the Hornets will surely be the team to watch throughout the play-in tournament.

Although there are some critics of the play-in tournament, including LeBron James and Mark Cuban, this addition to the post-season promises to be a treat for the fans and teams mentioned above. Regular season records aside, these are some incredible players who could shake up the final playoff seedings before all is said and done.