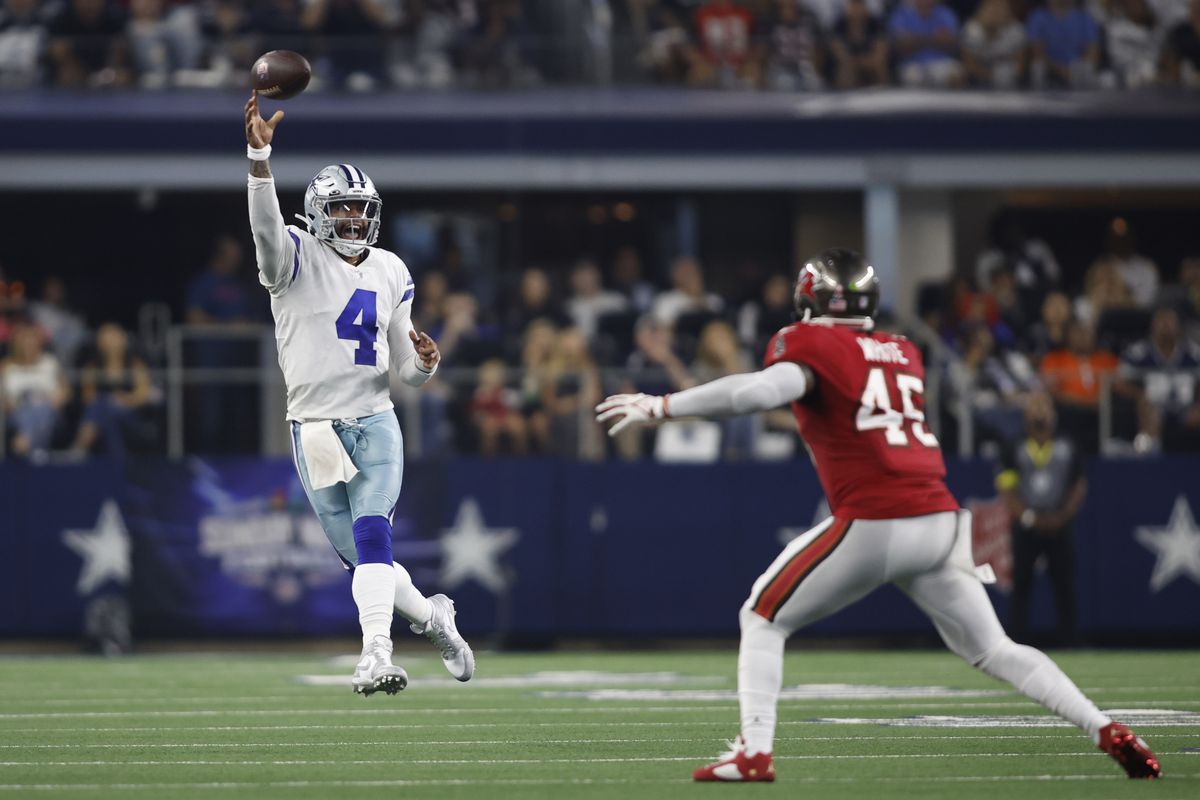 A disaster. That’s the simple way to put what the Cowboys showed on the field in week one against the Tampa Bay Buccaneers. From Dak Prescott injuring his hand to the lackluster offense, there are plenty of things that went wrong on Sunday night. The Cowboys are going to have to figure out what direction they want to head in as soon as possible. Here are five takeaways from week one:

From start to finish the Cowboys simply could get anything started on the offensive side of the ball. And that all starts with the quarterback. Prescott did not look like his normal self from last season, throwing for 19 completions on 29 attempts with 134 yards. He also added an interception in the second quarter and posted a QBR of 15.3.

Certainly, Prescott would love to have this game back but, that is not the biggest concern for the Cowboys organization right now. He left the game in the fourth quarter after hitting his throwing hand on defenders’ helmets on back-to-back plays. The timetable for his return is 6-8 weeks, needing surgery.

This is obviously a huge blow to Dallas who already struggled with their starting QB behind center. The plan as of now is for the five-year veteran Cooper Rush to start. Rush won one game last season against the Minnesota Vikings in primetime. He threw for 325 yards and 2 touchdowns in the 20-16 win. Jerry Jones is trusting that Rush can keep Dallas afloat in the NFC East until Dak returns.

Before the season began, all of the Cowboys’ nation knew that the receiver position lacked depth. That truly showed on Sunday night. The Cowboys could not get anything going through the air. Dallas only accumulated 198 yards receiving.

It seemed like Dak and his receivers were not on the same page most of the night, with balls being thrown behind and in front of receivers constantly. Several balls were dropped, it just did not look like the Cowboys were prepared outside. Number one receiver Ceedee Lamb was targeted 11 times but only caught two passes for 29 yards.

In hindsight, trading away Amari Cooper in hindsight was an awful decision. The Cowboys desperately need some experience and playmaking outside. Obviously, Michael Gallup and James Washington being injured play a huge part in that. But Jerry Jones and the front office knew that the first month of the season they’d be without two veterans outside. This issue needs to be addressed because the struggles will only progress.

And so it continues. After leading the league in penalties last season it has carried over into 2022. Dallas racked up ten penalties for 73 yards against the Bucs. Dallas would have a good play on offense and all of a sudden it gets brought back due to a flag. It is such a drive killer and it is something that can easily be fixed with more discipline.

Starting right tackle Terence Steele was responsible for three on one drive alone. Two false starts and one holding that essentially ended the drive. “It’s inexcusable. That’s something you can’t have,” Steele said after the loss.

The Cowboys have to clean it up. This cannot be another ongoing issue throughout the season. They have too many other issues that need to be fixed within the team. Cowboys just need to be more disciplined and be held responsible when they do happen to draw penalty flags.

After one regular season game, multiple Cowboys will be missing significant time. As stated before, Dak Prescott will miss at least 6-8 weeks after he gets surgery on his right hand. Another big loss comes from the offensive line. Left guard Conor McGovern suffered a high ankle sprain in the first quarter. He did return to the sidelines after being taken to the locker room but never stepped back on the field. He is expected to miss 2-4 weeks.

Safety Jayron Kearse also got hurt against Tampa Bay. He went into the game questionable with a neck injury but ended up playing. Kearse recorded seven total tackles before suffering a sprained MCL in the third quarter. The Cowboys’ safety is expected to miss 2-4 weeks. The last Cowboy that was injured was defensive end, Tarell Basham. In the fourth quarter, it appeared he injured his thigh and had to be helped off the field. It is still to be determined his recovery time.

Altogether, the Cowboys lost multiple key pieces to this football team that will miss significant time. Although it is unfortunate, it is what comes with playing the game of football. Players are going to have to step up until they return. Certainly not an easy task to get done, but something that needs to happen if this football team wants to be competitive.

The last takeaway is finally a positive one. The Cowboys’ defense led by Micah Parsons came to play last night. Giving up only one touchdown to Tom Brady and star powered offense of the Bucs is an accomplishment. The defense forced the Bucs to attempt five field goals within Dallas’ 30-yard line. They stood tall and simply would not allow the Bucs to get into the endzone.

Dan Quinn’s defense continued to look great going into the 2022 season. That is a huge positive takeaway from week one. They will need to maintain their defensive efforts as the offense will struggle this season for the time being.