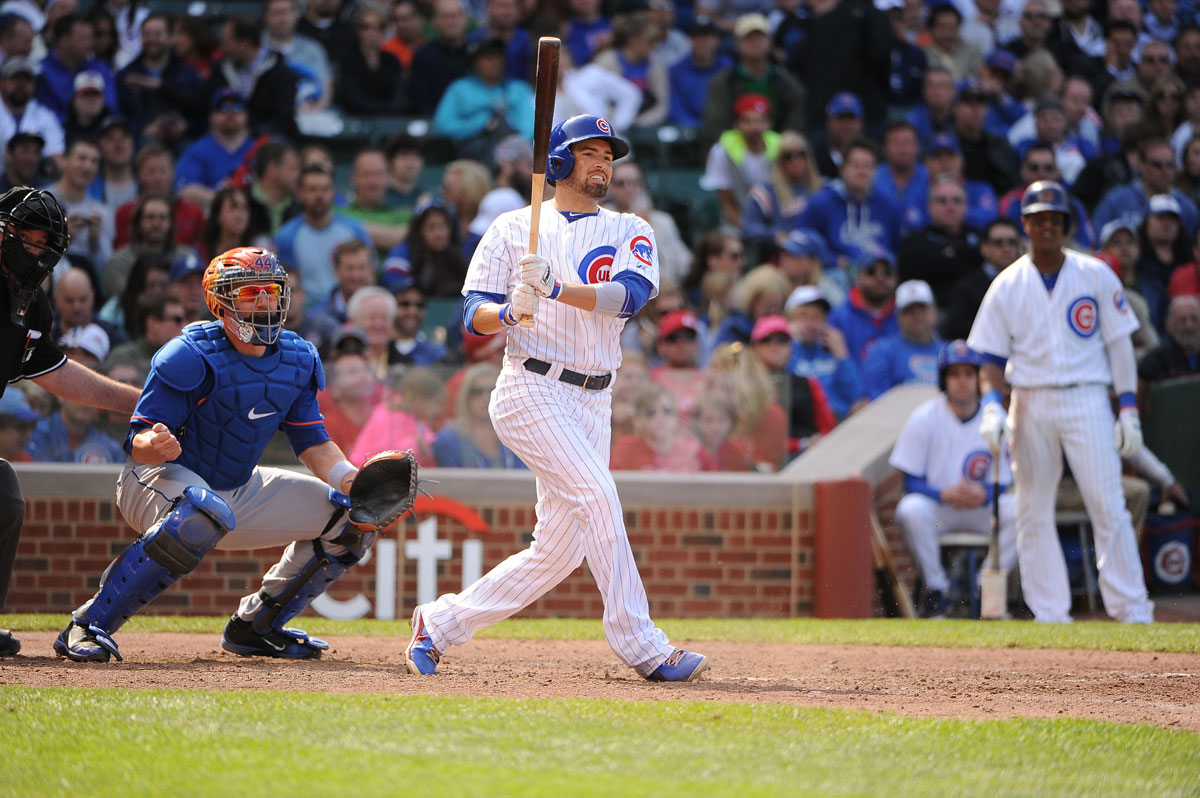 “We’re really excited to be working with Cubs Charities”, said Kim DeJesus. “They’ve been amazing to us, even after the trade. Once you’ve played on a Cubs team, they welcome you into their family forever, and they’ve jumped on board with our mission to fight ALS.”

Also known as Lou Gehrig’s disease, ALS is progressive neurodegenerative disease that affects nerve cells in the brain and the spinal cord. The disease, which affected David and Kim’s close friend, Brian Schnurstein, is characterized with rapidly progressive weakness, muscle failure, difficulty speaking, difficulty swallowing, and difficulty breathing. With voluntary muscle action progressively affected, patients in the later stages of the disease may become totally paralyzed. When the motor neurons die, the ability of the brain to initiate and control muscle movement is lost, and the progressive degeneration of the motor neurons in ALS eventually leads to death.

“Our friend Brian Schnurstein was diagnosed in 2011 with ALS,” said David. “He has a wife and 4-year old daughter, and you can’t imagine what the family goes through. Once we learned how devastating that disease is we wanted to help out any way we can.”

In 2010, David and Kim launched The David DeJesus Family Foundation in order to help families in crisis in Chicago and in parts of the world where people lack basic human needs. The mission statement is to help alleviate suffering for those that face devastation due to illness, poverty or disaster, as well as those who seek a voice to be heard. In particular, the foundation is actively involved in the fight against ALS. David and Kim first learned about ALS when Schnurstein was diagnosed in 2010. After researching his condition, they were stunned by the severity and cruelty of ALS on patients and their families. They couldn’t help but get involved with the fight, not only for Brian’s sake, but for every person and family fighting this battle. In addition to “Strike a Chord”, David and Kim have also hosted Foundation events such as: Strike a Pose Fashion Show, Mystery Ball Drive, Bite Night, and Cure 90/90.

“Tonight, I invited a bunch of local celebrities and old teammates to sing karaoke, and have the fans donate money to come up and sing with us,” said David. “It’s for a great cause and we’re honored to help out.”

The “Strike a Chord” fundraiser featured a handful of Chicago Cubs and local celebrities. The night commenced at the downtown mega-bar American Junkie with a heartfelt speech from David and Kim, followed by a video that highlighted Brian’s last four years of dealing with the degenerative disease. To lighten the atmosphere, Windy City Live’s Ryan Chiaverini took the stage to kick off the live auction. The first bidder was Todd Rickets, brother of Cubs owner Tom, who earned an autographed baseball and a generous round of applause for his donation. Other distinguished items that were on display at the silent auction table included: Ernie Banks and Anthony Rizzo signed jerseys among other gift baskets, and “night on the town” opportunities.

The strong turnout validated just how much Chicago and the Cubs organization still admire David DeJesus, despite the fact that he now plays for the Tampa Bay Rays. Throughout the evening, patrons enjoyed live karaoke, drinks, and hors d’oeuvres while providing donations to support ALS. Appetizers from local participating restaurants included Siena Tavern, GT Fish & Oyster, Chicago Q and Wow Bao. An open bar remained exposed throughout the event, while a mix of executives, media, and a few fans mingled with one another. Other notable Cubs players on hand included: second baseman Darwin Barney, third baseman Donnie Murphy, and pitcher Edwin Jackson.

“Anytime you have an opportunity to help teammates, it’s a great way to give back to the community,” said Edwin Jackson. “We are all here to support a great cause, it’s a time for everyone to wind down and have fun before things get started up.

DeJesus grew up in Manalapan, New Jersey and started playing baseball at the age of four. Like many kids, his childhood dream was to play professional baseball. Drafted by the Kansas City Royals in 2000, David’s dream came true when he was called up to the big leagues, and subsequently became player of the year for the Royals in 2004. In 2011, David signed a two-year deal with the Chicago Cubs before being traded to the Tampa Bay Rays during the 2013 season. While he is thankful for every team he has played for, David held his time in Chicago close to his heart.

“I think we’re all ready to go,” said Jackson. “Everybody’s eager and excited to hit the field. Once you get home, you start to get that itch. We’re all looking forward to a successful season.”

You can learn more about ALS and the David DeJesus Foundation or donate by visiting their website at DavidDeJesusFamilyFoundation.org