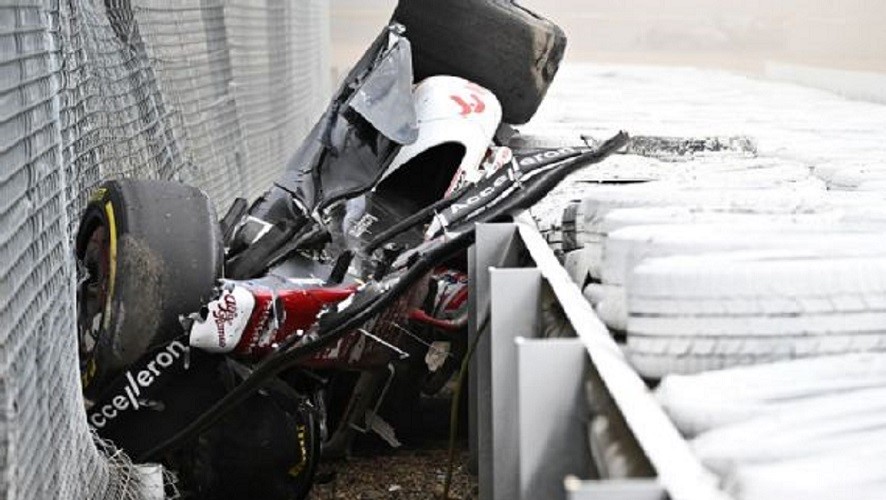 Ever since the Halo was introduced in 2018 in Formula 1, it was controversial amongst many drivers in the field and many fans. Ever since 2018, the halo has proven why it is necessary to have on the cars and it is a safety revolution for motorsports.

The halo once again proved as to why it is necessary for safety today. Today promised to be another great Grand Prix weekend for F1. This weekend’s race was held at Silverstone, in the United Kingdom. Hundreds of Thousands were in attendance, but nobody expected that the opening lap of the Grand Prix would turn out as it did.

What Caused the Incident:

The British Grand Prix would be red-flagged before the end of Lap 1, after Zhou Guanyu’s Alfa Romeo, would end up on the wrong side of the tire barrier after flipping over the top of the tire barrier. The wreck would happen right after the initial standing start of the race. A replay of the wreck showed that Torro Rosso’s Pierre Gassly would get pinched between the Mercedes AMG of George Russell, which sent Russell into Zhou’s Alfa Romeo.

Thankfully, the car did not roll while sliding through the sand trap. But unfortunately, the car was pitched into the air at the end of the sand trap, barrel-rolling over the tire barriers, and into the catch fence. Just moments after Zhou’s incident, William’s Alexander Albon would be involved in a separate incident in the same corner. Aston Martin’s Sebastian Vettel, piled into the back of the William’s, pushing Albon into the pit wall. Torro Rosso’s Yuuki Tsunoda and Alpine’s Estaban Ocon would be involved in the Albon incident as well. Zhou, Albon, and Russell would be out of the race. Tsunoda, Ocon, and Gasly would all continue back to the pits and continue.

The Rollover Hoop is going to raise some questions after being almost completely obliterated during the impacts. But the Halo and Rollover Hoop still did their job. Guanyu was safe and unharmed. Albon would be transferred to a local hospital for further evaluation and would later be released with no injuries.

Examples in the Past:

The Halo has proven to be a life saver in the past. In the 2018 Belgian Grand Prix, the Halo quite possibly saved Charles Leclerc’s life. On the first lap of the race, the Mclaren of Fernando Alonso was launched right over Leclerc and landed on top of the Halo of Leclerc’s car. Leclerc was driving for Sauber at the time, now team Alfa Romeo. The most note worth incident of the Halo saving a driver’s life would be in Bahrain in 2020. Former Hass Driver, Romain Grosjean, would be saved by the halo after his car was split in half and engulfed in a fireball after going underneath an Armco barrier.

Results of the Race:

The race would eventually restart, with everyone knowing that Zhou and Albon were safe and unharmed. Ferrari’s Carlos Sainz would earn his first Formula One Grand Prix victory in the British Grand Prix. Red Bull Racing’s Sergio Perez would finish 2nd. Mercedes Lewis Hamilton would round out the podium by finishing 3rd. This race was another reason why the Halo is necessary for not only Formula One, but all open-wheel racing. We are all thankful that Guanyu was unharmed after this terrifying wreck in Britain.