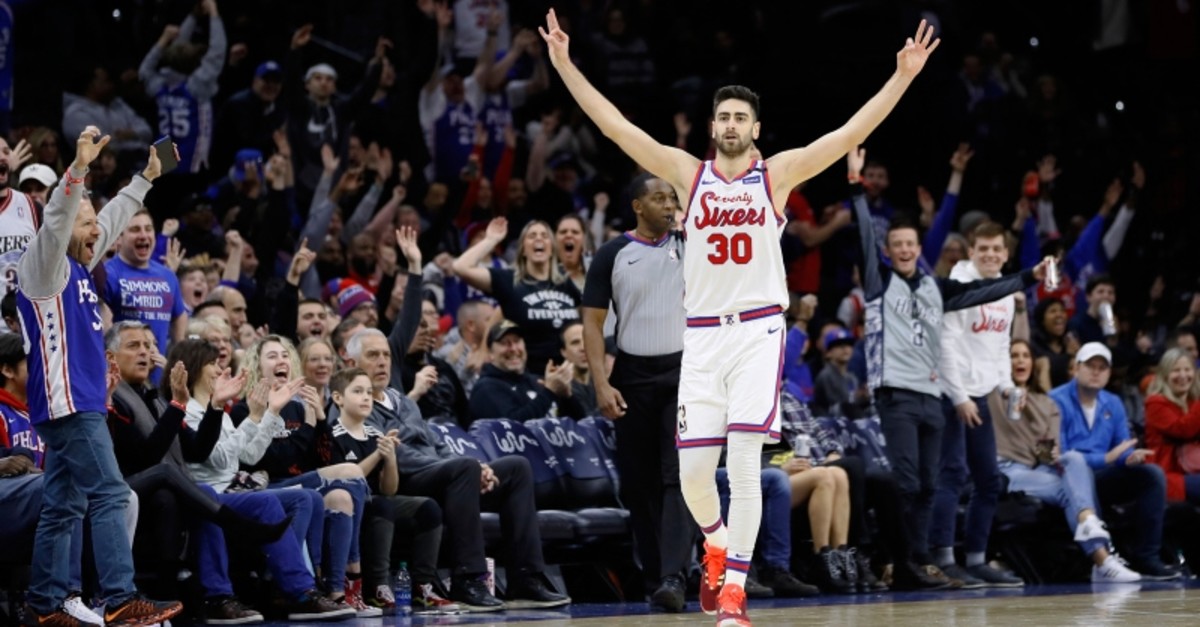 Ahead of the pivotal clash against the Brooklyn Nets, the Philadelphia 76ers secret weapon may just be Furkan Korkmaz. He’s been on a hot streak, dropping two straight 20 points games. In fact, against the Dallas Mavericks he was the team’s second leading scorer by a large margin. He did all that damage in just 18 minutes of playing, showing how quickly he can fill it up.

After that type of performance Korkmaz was naturally the topic of discussion in the postgame press conference. His coach and teammates laid on the praise, and they talked about the improvements to Kormaz’s game that’s led to his improved play of late. Speaking about himself, Furkan said a lot of the improvement has been mental. It has been a tough journey since his rookie year, and finally getting to contribute feels great. Staying positive, and putting in the hours in the film room learning opposing players tendencies and general strategy has been the key, especially on defense.

Defense was a major talking point which makes sense. In his past two games he’s amassed seven steals and a block. He’s playing the passing lanes well, looking Simmons-esque at times. Besides the counting numbers he’s done a much better job staying in front of his man. There were moments earlier in the season where Furk was a bit of a turnstile, with players able to beat him with power or speed. It will happen again of course, but the rate at which it happens has been way less. Furkan himself was proud of his defense and loves that his teammates appreciate his defense as well. Coach Doc Rivers has really instilled a love of defense into the whole squad and you can tell they’ve bought in.

Offensively, the main difference with Korkmaz has been faster decision making and more direct play. If you recall, that’s also been the theme to Tobias Harris excellent season, so it’s clear Doc’s on to something. Doc said that earlier in the year Furkan was dancing with the ball too much and not making direct plays. That was evident in his horror stretch during Shake Milton’s absence. Korkmaz was putting the ball on the ground but not doing anything with it, often dribbling around aimlessly. Now it’s either launching a three with his quick-draw release or driving in directly to the basket. From there he’s got a couple things he can do, whether a pull-up two, continuing to the rack or passing it out. There isn’t anymore circular dribbling or trying to do too much.

Doc also emphasized how much it helps Furkan to have guys that can find him, another reason Milton playing helps Korkmaz out, or why Korkmaz has great performances in the starting lineup getting to play with Ben Simmons. For his part, Simmons said he loves playing with Korkmaz, and that it has always been really easy for them to play together.

Breaking into the Playoff Rotation

Korkmaz has really pushed himself into the playoff rotation conversation. Playoff rosters often shrink to eight, maybe nine guys seeing the majority of the minutes. Shake Milton and Matisse Thybulle (depending on matchup) are all but locked in for two of those, so the opportunity for Korkmaz to play is small. A back-up big is almost a given, meaning Dwight Howard or perhaps Mike Scott. Finally, trade deadline pickup George Hill should also factor in, leaving very little room.

The Case for Korkmaz

With his improved play though, Korkmaz is making it a tough decision. He brings the most valuable role player skill in the NBA, elite three-point shooting, and is really the only one that can off the bench (pending Hill). Since the All-Star break he’s been shooting a clean 40.7% from deep, which is actually higher than Seth Curry in the same time frame. With Furk’s improved defense he hopefully won’t be a total liability on that end, and the 76ers thrive with as much spacing as possible. His 6’7 frame, lightning quick release and deep-ball accuracy isn’t really something the 76ers can easily replace.

Furkan and the Future

We’ve seen great Furkan at many times this season. We’ve also seen horrible Furkan that was dang close to getting completely benched. If the Furkan we see right now though is a sign of things to come, it makes the offseason decisions that much harder. Korkmaz’s contract is up this year, and what it takes to re-sign him might be a roadblock. The 76ers have quite a few contracts that will be expiring like Danny Green and Mike Scott amongst others, but they also still have three max players on their books.

Some recent Furkan Korkmaz type players might give us insight on what sort of deal Korkmaz might expect. Kyle Korver, also a sweet shooting 6’7 forward got a seven million per year deal from the Cleveland Cavaliers in 2017. Korver was much older, but also more proven. Joe Ingles in a similar mold signed a four-year 52 million dollar deal the same year, while Luke Kennard got three-years 41 million from the Clippers this year. The 76ers do have his bird rights, which helps, but his value is all over the place. Looking at his stats in a vacuum shows a 9.2 points per game scorer on above-average percentages from deep and average or worse defense. That could be worth less than five million a year. At the same time, he has 40% from deep potential, and is just 23, younger than Thybulle and Milton.