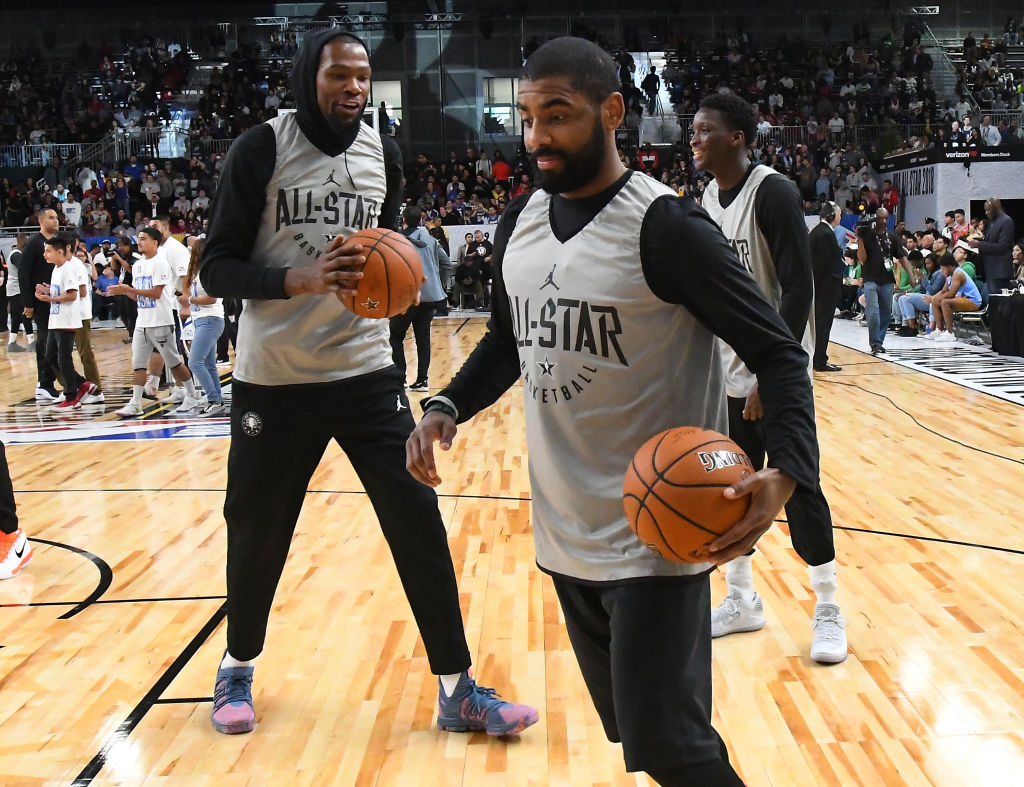 Thanks to Kyrie Irving and Kevin Durant, for the first time since 2013 the Brooklyn Nets have some superstars on their roster and a legitimate chance of going far into the playoffs.

However, there are a couple of questions that need to be answered when it comes to the Nets’ ceiling for this season. Firstly, as Durant rehabs a ruptured Achilles, who gets the start at small forward in place of the 10x All-Star? Secondly, which Kyrie will Brooklyn get? 2016 Cavs Kyrie or 2018 Celtics Kyrie?

After exceeding expectations and going 42-40 last season, including making the playoffs, the Nets are ready to take the next step. This offseason they proved that by signing former MVP Durant, NBA champion Kyrie Irving as well as 2x NBA All-Defensive First Team big man DeAndre Jordan.

Jordan was a surprise because we didn’t hear much about where he intended to play past this season besides when he stated at the introductory Knicks press conference that he was happy to be playing for New York. He just didn’t specify which team.

The Durant and Irving signings however were not as much of a surprise. Anyone who identified even as even a casual fan heard the chatter all season long about these two wanting to team up whether it was in Madison Square Garden or Barclays Center.

Now that we’re a little over two months from opening night and the Nets have an improved roster there’s a lot to figure out, one most importantly being rotations.

Due to the Achilles that Durant ruptured in Game 5 of the NBA Finals in June against the Toronto Raptors the Nets don’t expect him to be playing this year, or at least until late in the season at best. With that being said, who do you think should get to start in his place?

It should be Taurean Prince, who was acquired in a trade in July from the Atlanta Hawks. Prince had a great season during his 2018-19 campaign averaging 13.5 PPG, shooting 44% from the field as well as 1.0 SPG. He’s very athletic and can fly around the court as both a slasher and a jump shooter. Not to mention he was a bright spot on a struggling Hawks team last year with rookie sensation Trae Young.

There’s also Wilson Chandler. Although he’s been on four NBA teams he’s been productive wherever he’s played as a versatile and athletic threat. However he would be more of a veteran role player compared to Prince who can do more on the court.

Then there’s Joe Harris, a sharpshooting 3-and-D guy who averaged 13.7 PPG, 50% FG and 44% from behind the arc. If Harris gets the start at the small forward position then the Nets would have to commit to a small ball lineup and move Prince to the power forward position.

With Harris in there a starting lineup could look something like Irving, Dinwiddie, Harris, Prince and Jordan (with Jarrett Allen coming off of the bench).

Now that that is all settled and we can safely say that Irving will be starting at the point guard position, one might wonder, which Kyrie Irving will the Brooklyn Nets get?

Will it be 2016 Kyrie who was so happy that he started giving his “earth isn’t flat” philosophies or will it be 2018 Kyrie who publically called out teammates to the media for not knowing how to play basketball the right way? We shall see.

However, it’s fair to ask yourself. Are this year’s Nets really better than last year’s Celtics? If so, maybe Kyrie won’t be so quick to lose patience with his young teammates. If not we could be in store for a season two of the soap opera that was the 2018-19 Boston Celtics.

Last season Irving played 67 games (fourth most in his career) and averaged 23.8 PPG, 6.9 APG and 5.0 RPG. Despite those impressive numbers Irving, at multiple points throughout the season, didn’t mince any words when it came to Boston’s struggles.

“What we’re facing now is nothing compared to being on that stage, trying to get a gold trophy,” said Irving. “It’s hard now. What do you think it’s going to be when we get to the Finals? We can’t be comfortable being a fifth [seed]. I’m not comfortable with it.”

Keep in mind this is with guys like Jaylen Brown, Jayson Tatum, Gordon Hayward and Al Horford on his team. This year the next best active player on his team is DeAndre Jordan.

With that being said this will be a year of patience for the 6x All-Star Kyrie Irving, as he waits for his 2X NBA champion teammate Durant to come back from injury.

Then again, he is basically home and playing in his backyard so to speak, so maybe that will ease things.

LA Clippers: The Rest of the Squad
JOSH GORDON TO BE REINSTATED ON CONDITIONAL BASIS