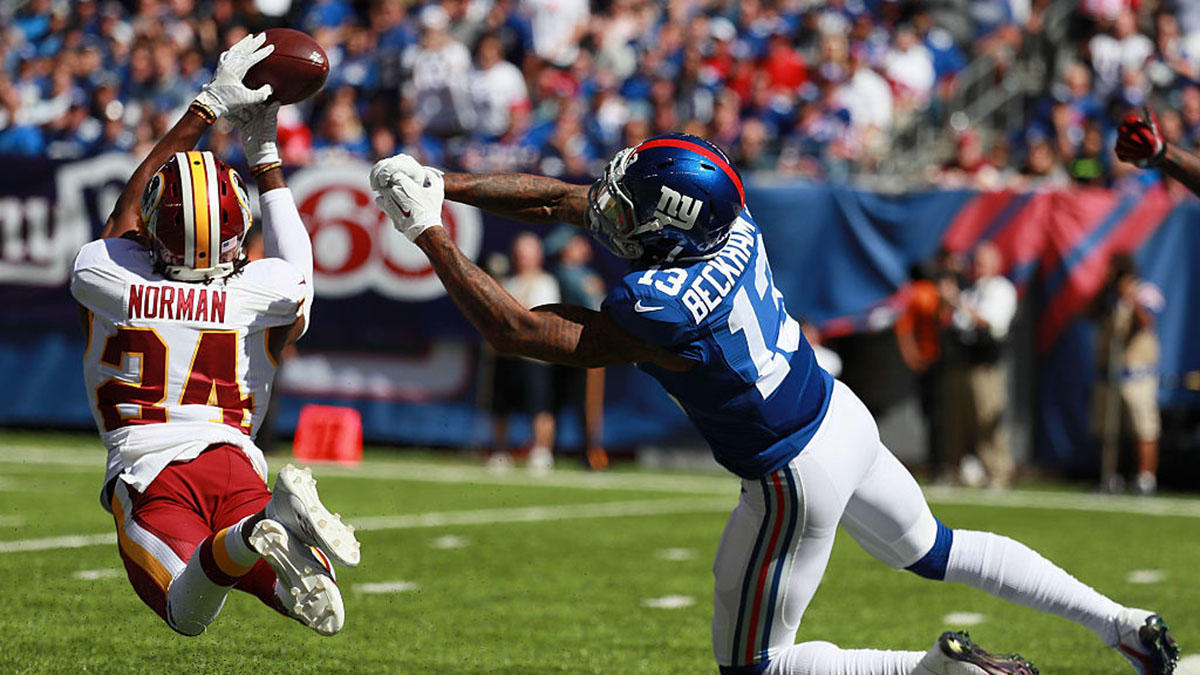 The Giants lost their fifth straight game Sunday and fell to 1-7 at the season’s midway point for the second consecutive season. This is the first time since the inception of the 16-game schedule that the Giants have been 1-7 in back-to-back seasons.

Big Blue entered today’ game with the idea and the hope they could at least go into the bye week with a win. That would help set the tone for when they return to play the 49ers for Monday Night Football and try and right the ship.

Instead the Giants followed the script they had written for themselves all season long. A struggling offensive line with the inability to give Eli Manning time to throw the football. Today that inconsistent play led to Manning being sacked seven times.

When asked  about the pressure felt, Eli  stated that he gave the Redskins all the credit.”Well, they have a good front. They were getting some pressure at times. We have to extend plays and stay in the pocket. Get the ball out on time. We had a good plan, did some good things but didn’t execute as well as we needed to.”

Manning completed 30 of 47 passes for 316 yards, including a two-yard touchdown to Evan Engram with 17 seconds remaining in the game. It was the 347th touchdown pass of his career.

The score remained close through out the game and mid way through the fourth quarter and the lead was cut to to seven when Adrian Peterson busted out a 64 yard run that led the the Redskins going up 14 points. Peterson fumbled the ball in the previous series which was recovered by Olivier Vernon for a 43 yard recovery. “One of my teammates made a good play. I was just ready to scoop it up and tried to make something happen.” said Vernon.

Peterson felt good as he was able to recover from the fumble to score the touchdown to seal the game. “It felt good. Ya know, it has been a long drought since I broke one (laughing). Guys kept saying ‘Keep eatin’, keep gettin’ it, you’ll break one.’ Felt good to break through, and to come back and re-focus. That’s what we talk about throughout the week, and before the game about overcoming adversity. For me it was about locking in, letting the next play go, and not letting the fumble affect me and affect the next play.”

Washington has won three straight behind the play of Alex Smith and Adrian Peterson. Smith who was traded from Kansas City during the off season to Washington knows that winning comes with the team coming together and focus together.

“Winning is hard in this league.” Said Smith  “I don’t care who you are playing. This is a division game on the road. This team had their back up against the wall. I thought all week we had great sense of urgency in our preparation and I thought we had great energy today from the time we stepped off the bus here. Great energy in the locker room, out there on the field, and looked to just kind of build off that.”

The Giants now fall to 1-7 and searching for answers. Do they make more trades before Tuesday’s deadline? Do they bench Eli Manning?

Pat Shurmer stated that the message stays the same even at 1-7. “Because that’s exactly what I believe, we just got to keep playing until we get it back on track. Once that happens, then we can move forward and it’ll be good. We just got to keep playing. We all watched the game, there’s areas we need to improve and we’ve got to try and find ways to make those improvements with the guys we had. ”

Eli Manning shared the same views as his coach. “Just have to keep fighting. The defense gave us a chance today and played outstanding. Offensively, we have to do our part. We are not scoring enough points. We are playing in close games and we are just not finding ways to win them, unfortunately. We have to be able to move the ball more consistently and we have to control the clock to help out our defense. We are just getting down. Down too many points in games. Not scoring enough points and not doing enough in the red zone. We can look at it, practice better and play better.”

Saquon Barkley had 13 of the Giants’ 14 rushing attempts, for 38 yards. Barkley caught nine passes for the third consecutive game, for 73 yards. Barkley is the first player in Giants history with nine catches in each of three straight games. ” I said before, it sucks that we’re losing. Obviously, I’m a competitor, we’re all competitors in this locker room, and we hate losing. I know you lose more in the NFL, because you definitely play a lot more games, but I guess you can say I’m disappointed, I’m upset, we’re all upset. We’re 1-7 right now. It’s not where we want to be. We know we’re much better than our record. That’s not where we’re at right now. We just got to find a way to do better.”

Odell Beckham, Jr. had eight receptions for 136 yards. Beckham caught eight passes for 143 yards last week in Atlanta. This is the first time he’s had at least eight receptions in each of two consecutive games since Nov. 1-8, 2015, when he had eight and then nine at New Orleans and Tampa Bay. These are his first consecutive 100-yard games since he had six in a row from Nov. 1-Dec. 14, 2015.

Beckham  discussed the 1-7 record as well. “I don’t know the level. You might have to ask a couple other people. It’s definitely not where I want it to be, it’s definitely not what I envisioned this team being. It’s definitely not why I worked the hardest I could have worked all off season to come back and give my very best. I just don’t feel like on Sundays I get do that. If there is any frustration, that’s where the frustration comes in. All I want to do is come in and do whatever I can to help this team win. I know I have more in me, I’m ready to do that.”