Giants Full Of Optimism Heading Into 2021 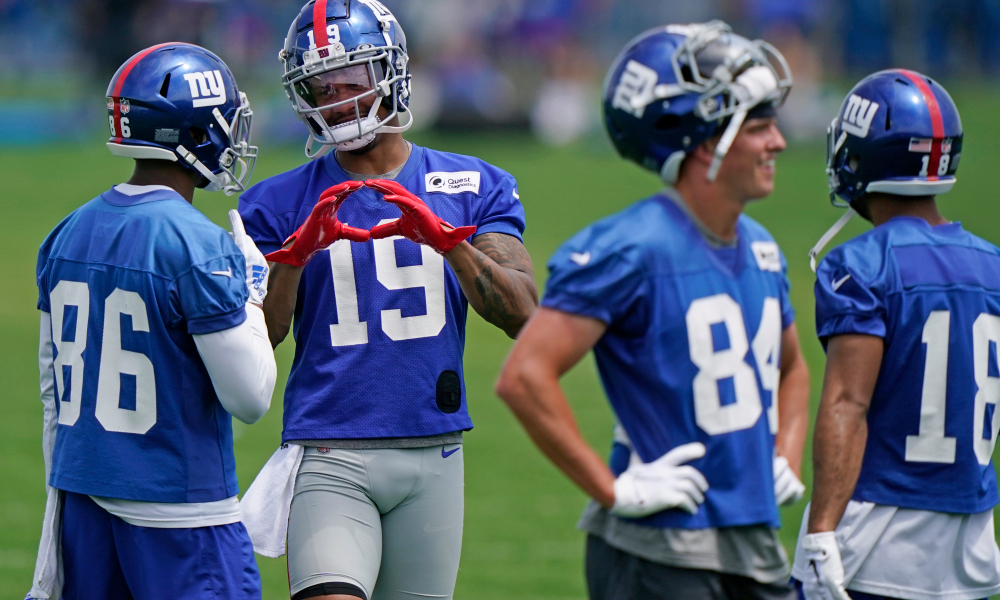 Giants players reported to training camp on Tuesday. From rookies to veterans, the Giants are ready to start their 2021 season. Quarterback Daniel Jones is going through his third training camp and when asked about his mindset he said he is handling it pretty much the same way as the first two camps.

“I think it’s a similar mindset kind of like what we were saying earlier, start at step one, basic install, basic information and go from there. At this point, we don’t want to overlook anything, don’t want to assume anything and take every step one by one, and make sure we’re building this thing the right way. So that’s kind of my focus going in. I think it’s definitely nice to come in knowing a lot of these guys and having built a lot of chemistry with these guys whether it’s from last season, the season before, this spring or the summer, so certainly continue to build on that stuff. But in terms of today and this camp, we’re starting from step one.”

Jones is entering his third year and his biggest year of his career. He returns with Jason Garrett as his OC again. Jones threw for 2,943 yards with 11 touchdowns and 10 interceptions last season under Garrett. This should be a big advantage to Jones as he is familiar with the offense already and he doesn’t have to learn a whole new one. Jones says this is very valuable to him and the team.

“I think it’s valuable. I think it’s valuable for all of us. I think it’s the second year in the system under Coach Garrett and [Head] Coach [Joe] Judge. A lot of us are back and, like I said, have developed chemistry and know how to communicate with one another, but kind of the same theme, to start over and take it day by day, to start with step one and make sure we’re going about it the right way. We’ve got several new guys and had some time to get to know them during the spring and in the summer and we’ll continue to go from there, but it definitely helps to be back with Coach Garrett, Coach Judge and a lot of the same guys.”

As we stated earlier this is the biggest year of Daniel Jones’ career. There can be a ton of pressure when you know you have to perform well or you can lose your job. Jones is aware of the pressure on him, and he is challenging himself to perform at the highest level.

“Yeah, I think at this level and in this job, we’re all expected to perform and play at a high level every day, and that starts today. I certainly feel that. I think everyone on the team does and I think that’s healthy, I think that’s the way it should be and I know we’re excited for the opportunity.”
Jones is one of the younger guys in the locker room. As for Logan Ryan he is entering his ninth year in the league. He has a ton of experience and is a starter for this Giants defense that has high expectations to be a top ten defense in the league.

This is his first training camp with the Giants. He was previously with the Titans and Patriots. Ryan has been in camps with Coach Judge before. Judge was an assistant with the Patriots before coming to New York. Ryan was asked if he knows what to expect from Coach Judge over the next six weeks.
“Yeah, I think so. I played for a couple teams Joe Judge coached at before. They weren’t his camp – I’m sure they may be similar, they may not – but Joe Judge is tough on the fundamentals. A lot of conditioning. That’s how I made a career for myself, being fundamentally sound and being in shape for nine, ten years now.”
It seems as if the players are putting a lot of trust into Coach Judge. They are putting last year in the past and are focusing on 2021. That is a great sign when the players and coaches are all connected with each other. This positivity and connection creates optimism throughout the locker room. When the leader of the team, Coach Judge, is totally committed to this season and not worried about what happened in 2020 it is hard not to be optimistic about the future. Ryan is one of those guys.

“I mean, I’m always optimistic, honestly. I’m an optimist myself. Last season was last season. It has no bearing to this season. We have a lot of new players on our roster, players who haven’t played here before. Look, I think you need talent. I think you need a talented team to win, for sure, but you need that team to stay healthy and I think you’ve got to get the reps in the system. I think you really need to run your system and really put the work in together and that’s what we’re doing now. That comes in training camp. That’s just part of the team-building, team-bonding process of getting yourself in football shape and really putting those reps in and those details as players because great players help you win games, but great players got to play great together in great units and that’s what we’re trying to create is great units and obviously a great team. That just comes through training and that’s what training camp is for.”

The optimism on day one from all the players is exciting to hear. They are looking to build off of the impressive play towards the end of last season. Most of the team is the same so the chemistry will be there. The off season additions will only benefit an already hungry team looking to make a playoff run. As camp continues we hope to see the players continue to stay healthy and have a positive outlook on this upcoming season.