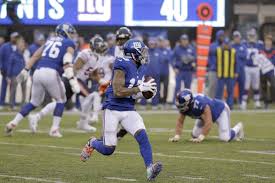 Sunday turned out to be a very important day for the New York Football Giants as they won for the fourth time in five games to improve their record to 5-8 as they defeated the Washington Redskins 40-16.

The Giants were led by Eli Manning who played the first three quarters and completed 14 of 22 passes for 197 yards, three touchdowns, and no interceptions for a passer rating of 132.0 that was his third-highest of the season. Sterling Shepard, Bennie Fowler and Russell Shepard received touchdown passes from the All-Pro QB as he led the Giants in this dominating performance.

“You know, it’s fun,” Manning said. “Those don’t happen all that often in the NFL, where everything is clicking and the defense is getting turnovers. Offensively hitting a bunch of big plays in the run game and a couple in the pass game, and scoring in the red zone. They don’t happen much so you’ve got to take advantage of it, but it’s fun to be in those type of games when everything seems to be working.”

Saquon Barkley who had 170 yards, including a 78-yard touchdown, on 14 carries, also led the team with four receptions for 27 yards. Barkley extended his Giants rookie record by increasing his season total to 1,124 yards and his 1,000-yard season is the 24th in Giants history.

This was key as New York won this game without their star Wide Receiver Odell Beckham jr.  Beckham, the Giants’ leading receiver, missed his first game of the season because of a quad injury he originally suffered two weeks ago in Philadelphia. The Giants announced yesterday that Beckham did not travel with the team to the game.

“Everybody was involved, everybody stepped up,” Manning said. “Hit a nice deep one to Corey (Coleman), just missed on one earlier in the game, but had a nice one to him. Got Evan Engram going on a nice shallow route in the second half, he had a nice one before halftime that got us into scoring position there. Obviously, Bennie had a touchdown on an over-route, Russell Shepard on a touchdown. Everybody was in there, everybody was playing, and¬ it was good to see everybody getting involved and get going.”

Tight end Evan Engram returned to action after missing two games with a hamstring injury and caught three passes for a team-high 77 yards, including a team-long 39-yarder. Fowler made his third start of the season in place of Beckham and caught his first touchdown pass of the season.  Sterling Shepard has two receptions for 17 yards, including a three-yard touchdown, and delivered key blocks on each of Barkley’s long runs. Russell Shepard scored on an 11-yard throw. Coleman’s 30-yard catch was his longest of the season.

The Giants took a 7-0 lead when safety Curtis Riley intercepted a Mark Sanchez pass and returned it nine yards for his first career touchdown with 2:45 remaining in the first quarter.  Kareem Martin tipped the pass which led to the Pick-Six

This was the second straight week the Giants had a interception run back for a touchdown. Last week against the Bears, Alec Ogeltree returned one in the first quarter which help put the Giants on the board early in the first quarter. Ogletree registered his fifth interception when he picked off a Sanchez pass and returned it 18 yards which led to another Giants touchdown.

This is a far cry from the 1-7 start the team struggled with earlier in the year. “We certainly did not start the year the way we wanted to,” Head Coach Shurmur said. “But I think we’re playing more in a way that’s evidence that we’re getting better and were on the right track. A game like today just re-confirms what we all believe; that if you play hard and you play for the guy next to you, and you’re happy for everybody making good plays. It feeds on itself and you can have a day like today.”