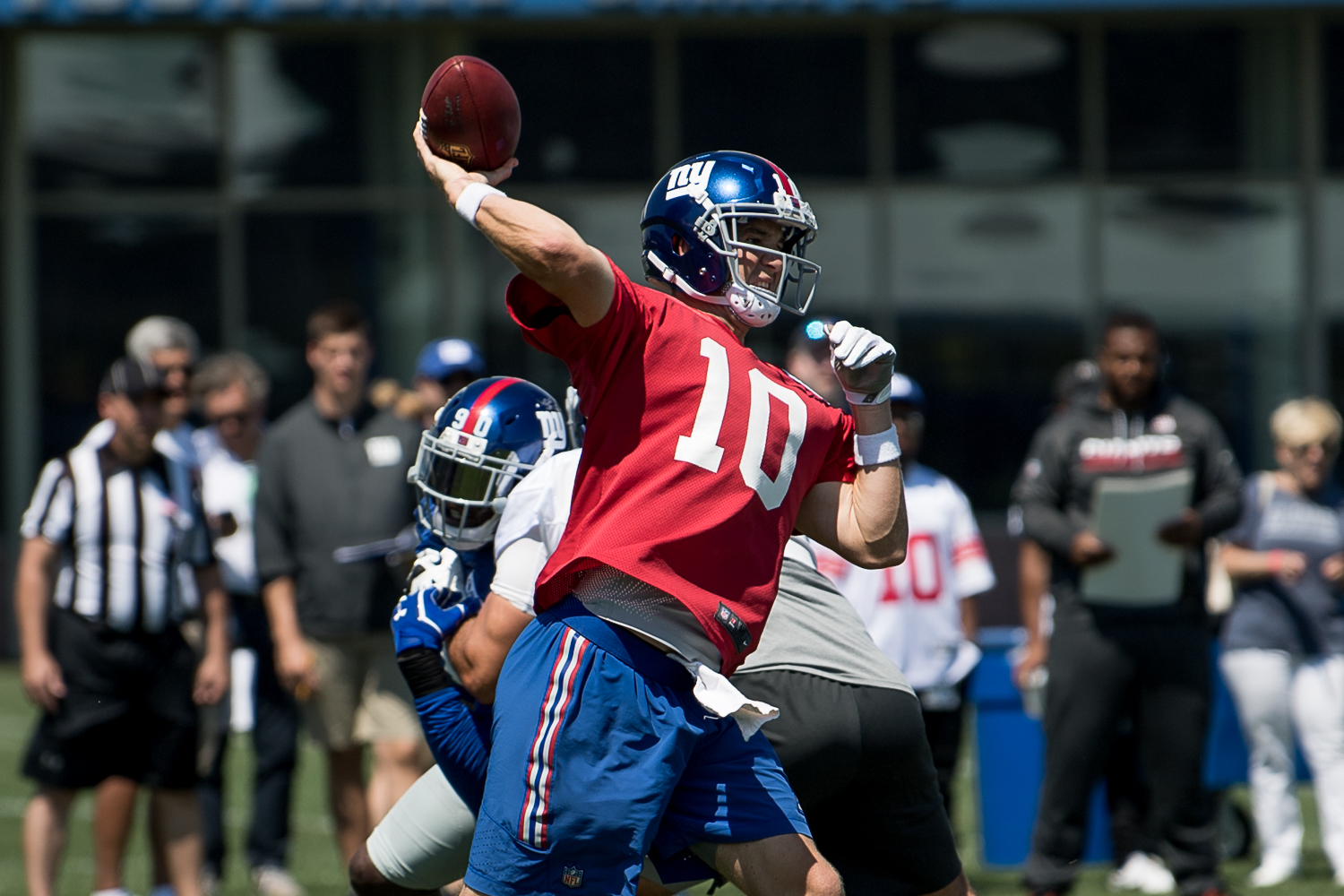 Interim Head Coach Steve Spagnuolo updated the media yesterday on some injuries that took place against the Eagles. “The only new injury was DT came in a little sore. Darian Thompson. His knee was a little bit sore. They’ll send him over for an MRI. Hopefully, that’s just a precautionary thing. Both Landon (Collins) and B.J. (Goodson) kind of tweaked those ankles so that’s why you didn’t see them play at a certain point and TK (Tavarres King) you know is in the concussion protocol, so we’ll see where he ends up. Most of the other guys are just bumps and bruises, you know, normal 14th, 15th week of the season. So, hopefully we’ll get all those guys back.”

The Last Play Against Philly :

Spagnuolo asked after viewing the tape if Even Engram was held in the end zone on the 4th and Goal pass by Eli Manning. “It looked like it. On the coach’s tape it kind of looks like that. But, he couldn’t get it up there. But, I’m not sure where the positioning of the officials were that they could see it or not. They’d have to answer the rest of that. You could make an argument, (I know) where you’re going. I won’t make the argument, but I’m just saying that you could make the argument.”

Manning was asked about the same play. “Yeah, I mean, hey, it could have been called, but I didn’t think it was an obvious call. They were going back and forth so we got to throw the ball a little lower and try to make a play so that’s football sometimes. I could have put the ball a little lower, I guess, to give him a better shot. They had it covered up pretty well, I tried to throw him open and put it up high where he can make a play, it just didn’t work out. There was some contact, so whether it’s enough to be pass interference, it could go either way”

“There’s not a whole lot of great fourth-and-goal from the 12 plays. But I was trying to get him, I had him on a corner route, maybe I was playing some outside leverage, just trying to back shoulder it and give him a chance. Got it in the end zone and there was some contact being made, I don’t know, it’s tough to know if it’s interference, if it’s the call or not. You kind of just put it up high and give him a chance to make the play and we didn’t make it.” Manning continued

Wide Receiver Sterling Shepard chimed in as well on the final play. “Yeah, I was pretty upset about that one. I kind of let my emotions get the best of me on that one. It was just such a critical play for the game. I just didn’t like how it all played out, but I’ve got to be smarter at the end. But I mean, you can’t tell me that it’s not a pass interference. I mean my guy couldn’t even lift up his left arm, so you hate to see it happen that way, but I’ve got to be better.”

Eli Apple is Back:

Eli apple returned to the line up this past weekend after not playing since the 49ers game a few weeks back. Apple was asked what the last month had been like for him. ” It’s been a lot, it’s definitely been a lot. But just continue to try to grow and lean on the leaders here and get better every day.  I was a little rusty, I’m not going to lie. But I think as the game was going on, I got better.”

The Giants today activated Romeo Okwara from the reserve/injured. The second-year defensive end eligible to play in the season’s final two games.

When asked about his best individual performance of the season, Eli found away to make it about the team. ” I was proud of the way the offense and the team competed all day. Offensively, we had some guys step up, make some plays. I thought the coaches put in a great scheme and the guys executed it well and we’ve got to build off that and keep being able to make some big plays in the passing game and be aggressive and execute like we did.”

*Manning completed 37 of 57 passes for 434 yards, three touchdowns and one interception (the game’s only turnover).

*The 37 completions were the third-highest total of Manning’s career; he completed 41 passes vs. San Francisco on Oct. 11, 2015 and 38 at Philadelphia last season.

*This was the second time this season Manning threw for more than 300 yards in a game. The first time was also against Philadelphia, on Sept. 24, when Manning passed for 366 yards.

*Manning’s 434 yards raised his season total to 3,973 yards. It is the 13th consecutive season he has thrown for at least 3,000 yards, tying him with his older brother, Peyton, for the thid-longest streak in history. Hall of Famer Brett Favre threw for at least 3,000 yards in 18 consecutive seasons, and New Orleans’ Drew Brees has an active streak of 14 straight years.

*Manning’s 252 passing yards in the first two quarters were his most ever in the first half of a game. He has thrown for more yardage than that in the second half several times.

*Manning has now thrown 51 touchdown passes vs. the Eagles, his highest total against a single opponent. He has thrown for 49 scores against Dallas.