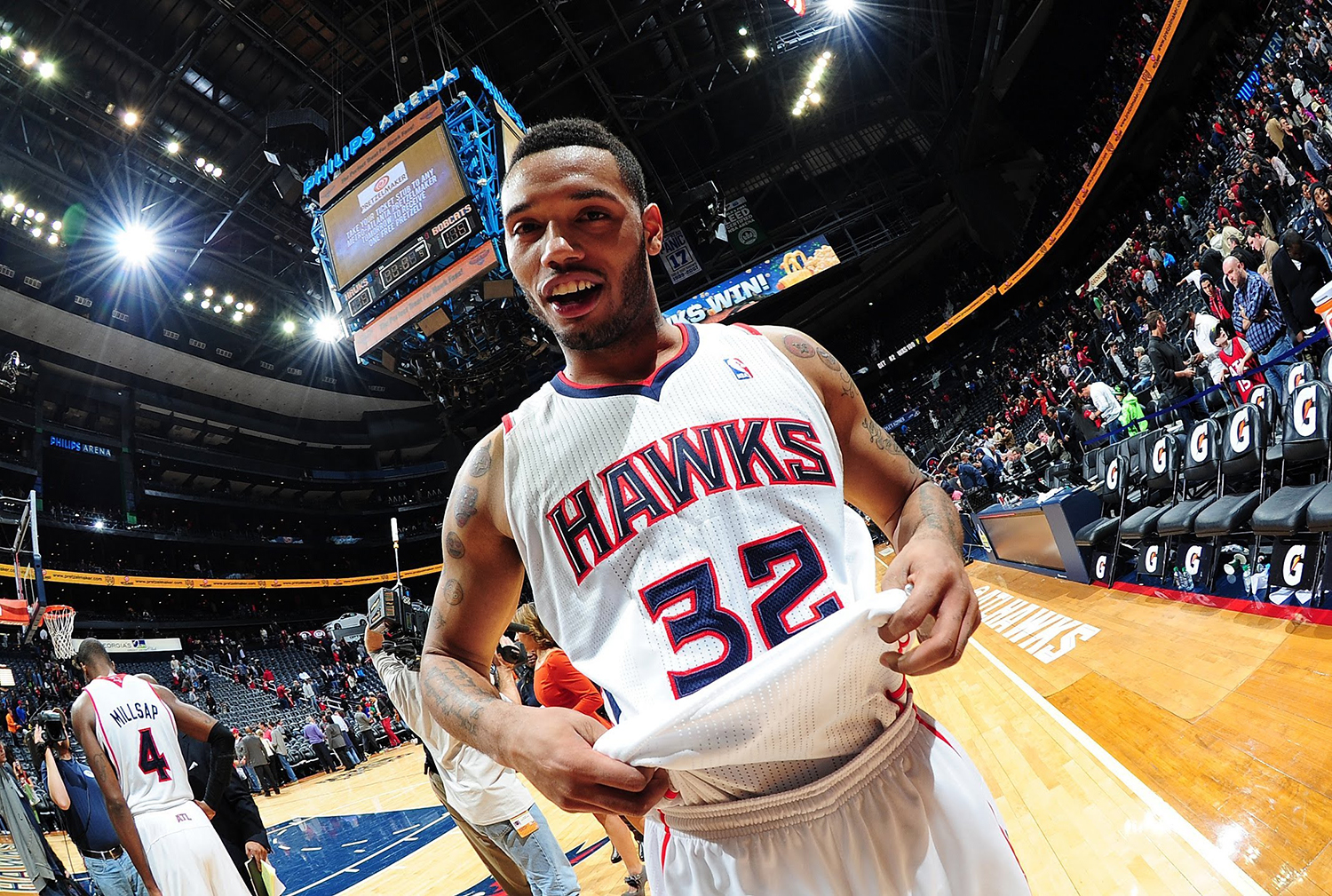 For several seasons now, the Atlanta Hawks have proven to be a playoff contender in the Eastern Conference due to their hard-nose, never-give-up style of basketball. Joe Johnson was once considered the team’s best player and leader, but the Hawks frontcourt soon became the focus of the organization.

After drafting Josh Smith with the 17th overall pick in 2004, followed by All-Star Al Horford with the third pick in 2007, the Hawks proved their eye for talented big men will be stepping stones to their future. That notion was showcased when they were one game away from taking down the vaunted Boston Celtics, who had just assembled the NBA’s first “big three”—Kevin Garnett, Ray Allen, and Paul Pierce. The Hawks instantly put themselves on the map when they drove that soon to be NBA championship team to an unexpected seventh game in the first round of the 2007 playoffs.

In 2012, the Hawks selected University of Virginia small forward Mike Scott with the 43rd overall pick in that year’s NBA draft. After trading perennial All-Star Johnson, it was clear to see building around the frontcourt was the Hawks’ main focus.

The Hawks’ first attempt at completing their dominant forward-center combination didn’t necessarily work out to its fullest potential, when they used the 2ndoverall pick in the 2005 NBA Draft on University of North Carolina star Marvin Williams. Williams is a solid NBA player, but never truly reached the level the Hawks had hoped for. He was eventually traded to the Utah Jazz for point guard Devin Harris before the 2012-2013 season, leaving the door wide-open for a small forward like Scott to take advantage of.

“With the transition from college to the league, I just worked hard last summer. I worked hard to get in the best condition of my life,” said Scott.

Scott began his high school career at Deep Creek High School in Chesapeake, Virginia, before eventually moving onto the Hargrave Military Academy for a year. Scott wasn’t subjected to the bright lights and publicity many upcoming stars deal with in high school, as he and his teammates were a simple, tight-knit group on and off the court.

“We weren’t top of the nation, I wasn’t All-American, or a five-star player, we were just a group of young guys that loved to play the game,” explained Scott. “We’re actually all still friends until this day.”

Given his impressive play, the University of Virginia officially signed him in 2007. Scott proved to be a valuable commodity in college when he led the team in rebounding his sophomore and junior seasons, setting himself up for a breakout year in 2010-2011.

Through his first 10 games, Scott averaged a solid 15.9 points and 10.2 rebounds before an ankle injury ended his season early. Scott was granted a medical redshirt and a fifth year of eligibility for the 2011-2012 season; averaging an outstanding 18.0 points and 8.3 rebounds per game, he was one of the top players in the Atlantic Coast Conference. Scott also led the ACC in field goal percentage at .563, spearheading the Cavaliers to a 22-10 record and their first NCAA tournament berth in five years. Scott talked about how that extra year in college helped his transition to the NBA.

“Some guys are just ready. The Brad Beals, Anthony Davis, they’re ready for the big league. Other guys are not ready but they see the money, the opportunity, and that’s difficult,” explained Scott. “When you’re in that position, you want to go to the NBA. But I say if you’re ready, you’re ready. If not, come back a second year, come back a third year.”

Scott went on to receive conference recognition with the second-most votes for the All-ACC team, national credibility as a third team All-American by the Sporting News, and honorable mention All-American by the Associated Press. The small forward went on to finish his efficient career at the University of Virginia with 1,538 points, and as the third leading rebounder in Cavalier history.

“Hearing that you’re going to graduate from a university like Virginia took a whole load off, so I could focus on basketball. I’ll never forget when they called our names when we made the tournament on Selection Sunday, it was the first time we made it in 55 years. It took hard work but it was definitely some glory for us,” said Scott.

Although the Hawks drafted Vanderbilt guard and sharpshooter John Jenkins with their first-round pick (23rd overall) in 2012, the Hawks had high hopes for their second-round pick. They were clearly in rebuilding mode when they decided to move the lucrative contract of their star shooting guard Johnson, so the Jenkins selection was a crucial position to fill at the time. Scott is one of the young, mature players who understand the difference between the college and pro game, and how to adjust to this newfound spotlight.

Like an extremely large portion of young NBA draft picks, Scott still has plenty to learn about the ins and outs of the world’s highest level of basketball competition. However, the 24-year-old’s potential is sky high, and it’s clear the Hawks are determined to complete their frontcourt supremacy.

“It’s a business, and teams seem to go by potential. You may have better numbers than a certain player, but it’s all about potential, and I just wanted to make sure I can go as hard as I can,” said Scott. “The game is a lot faster than I realized. These guys were a whole lot bigger, stronger, and physical. It was tough when I first started out this past season because of the speed. It took me a while, but midway through the season I started to get the hang of it, and get more comfortable.”

In an attempt to strengthen and expand his game, the Hawks assigned Scott to the Bakersfield Jam on December 1, 2012. He was almost instantly called back to the Hawks on December 11, after averaging a proficient 13.3 points and 6.3 rebounds in only four games. He was recalled once again in March, but quickly sent back to the Hawks.

Scott also talked about how the players on his team helped him adapt more to the league, essentially contributing to his growth as a player.

“We got a veteran team. I got to learn from Al Horford, Josh Smith, Ivan Johnson, Zaza, Petro, guys like that took me under their wing. I was just learning, and soaking up all the information they gave me,” said Scott.

Scott is now looking to expand his all-around game. The young forward understands how important it is to sharpen every tool that he can bring to the court, and how vital it is for a team to have a prominent “glue” guy.

“I’m working on my weak-side defense. I’ve never been a shot-blocker, so I need to be a charge-taker, be able to switch off on a guard, and stay in front of someone smaller than me. I’m increasing my three-point range and my ball-handling, so I can be more versatile,” said Scott.

When Scott is not on the court or working on his game in the gym, he’s just a normal kid with simple hobbies. He loves to play video games, NBA 2K and Call of Duty ranking among his favorites. When asked if he was pleased with how he was created in 2K, Scott jokingly had his objections.

“First of all, my free throws are terrible, and then they got me that I can’t shoot,” said Scott. He continued to kid around about the video game, showing his sense of humor is right where it needs to be.

“One of the things I can do, is shoot mid-range jump-shots. I’m like, wow, at least they got me athletic, but a C-, I don’t know,” he joked.

Unlike many players, young and veteran alike, in professional sports today, Scott seems to have a good understanding of how important it is to manage one’s money and find the right agent.

“I have good people around me. My agent, a financial advisor, and of course I have my family and friends. They’ve given me the proper information on where to put my money. I’m not a 19-, 20-year-old kid anymore. I’ll be 25 this summer, so I kind of know the ins and outs of spending money,” said Scott.

The Hawks have a ton of salary-cap room in the upcoming season, and it’s clear to see they’re still in rebuilding mode. This leaves a perfect opportunity for a young player like Scott to finally get the minutes many believe he deserves. It’s up to Scott to prove himself and show the Hawks he’s the missing piece in one of the brightest, most talented front-courts the league is blessed with today.

“With a year under my belt, and a little bit more experience now, I’m just excited to get after it, and show everybody what I’m made of,” said Scott.