A’s got back underway for spring training games, that saw several breakout players. Apart from the games, big news broke surrounding the team. 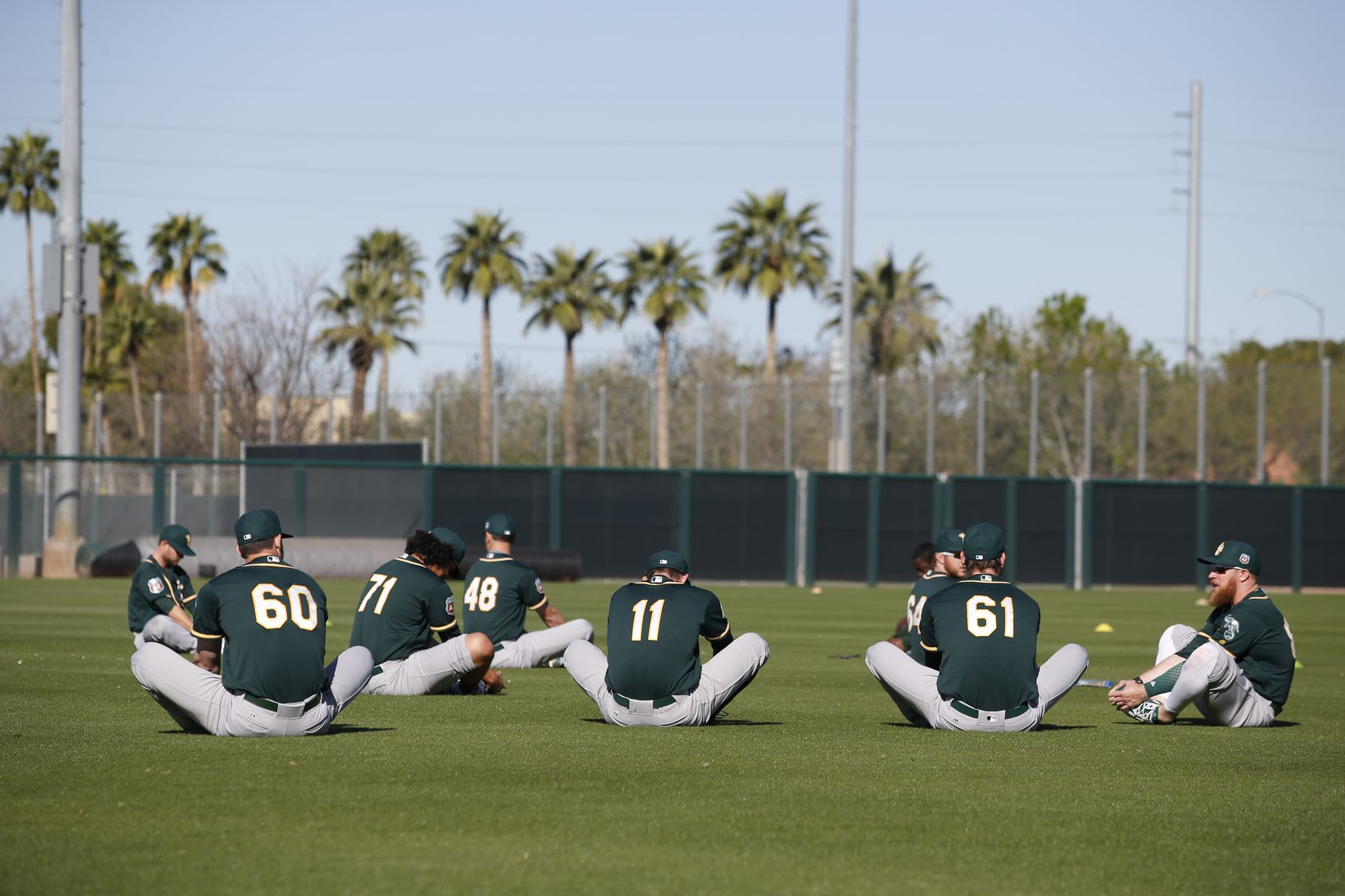 A’s got back underway for spring training games which saw several breakout players. Apart from the games, big news broke surrounding the team.

As A’s baseball sprung back into action in the first spring training games this week, the team received a combination of exciting news combined with exhilarating play. The team is playing in front of fans for the first time in about a year. They are also expecting to even start the regular season next month with fans. This brings a long-awaited glimmer of hope to the fans of the green and gold. Amongst this hope came the announcement that the first month of the minor league season would be canceled, requiring teams to all teams to reconfigure what they do with their top prospects. Here is a first look at the 2021 A’s in spring training.

A’s To Welcome Back Fans As Early As Opening Day

With fans already attending spring training games, the Oakland Athletics just announced on Friday that in cooperation with Alameda County and Major League Baseball fans will be allowed back at the Coliseum on opening day. The contest against the Houston Astros is scheduled for April 1.

“We are excited to safely welcome fans back to our ballpark for the upcoming season,” said A’s president Dave Kaval. “We thank Governor Newsom for his leadership and guidance during this process, and Alameda County for partnering with us to develop a comprehensive plan that complies with local health guidelines and provides a safe experience for our fans, employees, players, and vendors.”

The capacity of fans allowed will depend on which tier of Covid-19 restrictions Alameda county is in come opening day. The county must be in the red tier or better for any fan attendance to be a reality. The Coliseum parking lot will still continue to serve as a mass vaccination site. While general tickets haven’t gone on sale, the A’s are selling priority flex packages for fans to purchase for future games.

This past week, the A’s made another positive step in securing that long awaited new ballpark at Howard Terminal in Oakland. The city published a draft environmental impact report . Next on their plate is a 45-day period for public comment on the impact report, as the team also awaits a project agreement to clear the way for construction to happen.

Buddy Reed (OF): The 25-year-old prospect was acquired by the A’s as a player to be named later along with catcher Austin Allen. This 2019 deal sent Jurickson Profar to the San Diego Padres. In the A’s spring training opener, Reed wasted no time making himself a household name in Mesa. He made not one but two blazing throws from right field in the A’s first game back last Sunday. While his fielding was already known to be an area of strength, his bat has been just as explosive this spring, a first for him. He has been one of the A’s most effective power hitters, slugging two homeruns in his first seven games with the team. So far in his audition, he looks like a steal for the team, and a plausible fourth outfielder at the very least at this point.

Pete Kozma (2B): Kozma has gotten off to a hot start this spring. This is needed for someone like him if he wants to have a chance to compete for that second base roster spot. Kozma’s biggest strength in his time in the majors so far is his above average fielding. But his hitting has limited his time on the big stage. This might be his first breakthrough chance however. He went 4-for-6 to start the spring and is currently batting an impressive .400. He just made the A’s choice at second base that much tougher.

Tony Kemp 2B: Speaking of breakout second basemen, Kemp has done nothing less than make the case not only for an A’s roster spot, but as their everyday second baseman. Last season he made valuable baserunning contributions as a bench player and occasional starter in the team’s 60-game grind. This spring, he has added some pop to his swing, putting up a .778 slugging percentage in seven at-bats. With Jed Lowrie not quite cleared to play, Kemp could be a leading candidate for that starting second base position if this production continues.

James Kaprielian: So far this spring Kaprielian has struck out three batters in three innings pitched while holding opponents scoreless. Kaprielian showed off his nasty breaking stuff when he struck out the side in the seventh inning of Friday’s contest against the Los Angeles Angels. At 27-years of age, this strikeout machine looks like he could be primed for his first full big league season.

Daulton Jefferies: The 25-year-old out of the University of California is vying for a starting spot in the A’s rotation. The problem? The A’s starting pitching staff looks set already. This is too bad as he has looked nearly flawless so far this spring. He allowed just one hit while striking out four batters in three innings pitched. Coming off a limited season that saw a 60-game sprint, every team faces the possibility of their pitching staff looking rusty, which will require depth beyond the 5-man rotation. So far, Jefferies looks like a guy who can be there to provide that depth.

Grant Holmes: So far this spring Holmes has been one of the team’s most frequent pitchers. Unfortunately, injury troubles and command issues have slowed Holmes’ development through the minors. However, Holmes looked promising in his 2019 return with the Double-A Midland, only to have to miss last season due to minor league cancelations. If he can stay healthy, like Jefferies, he could be utilized down the line for depth, and eventually join the A’s pitching staff in years to come.

In these past two weeks since the last Green and Gold report the A’s filled their last minute voids with a solid core of veteran free agents. By re-signing reliever Yusmeiro Petit and adding veterans Trevor Rosenthal and Sergio Romo to the pen, the A’s got the cheaper end of the deal in what has potential to look just as strong of a bullpen core as last season’s. They also acquired lefty relieverAdam Kolarek from the Los Angeles Dodgers. The A’s also filled their other big void at free agency when they acquired left-handed power hitter Mitch Moreland. He will likely fill the designated hitter role for recently departed Khris Davis.

Following the signing of Moreland last week, the A’s designated rich hander Paul Blackburn from Brentwood, California for assignment. Blackburn struggled to find his footing in the A’s starting rotation after a promising debut in 2017 that saw him post a 130 ERA+ in 10 outings.