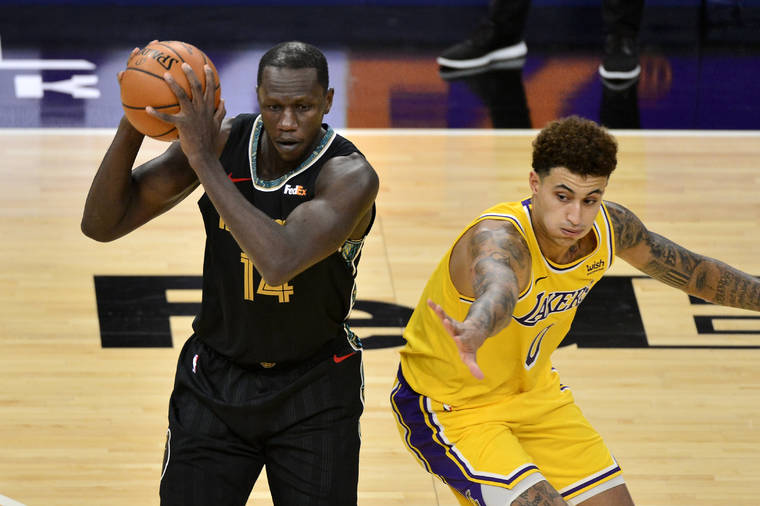 The Memphis Grizzlies have had to adjust to a litany of challenges in the first weeks of the NBA season. They’ve learned to play in an empty FedEx Forum, an arena lacking the energy usually brought by Grind City’s loyal fans. The team has battled through massive roster turnover–at this point nearly half of the roster has missed a game due to various ailments. To make matters worse, they’ve played one of the most difficult schedules in the league, having encountered the Atlanta Hawks, Boston Celtics, and Los Angeles Lakers. Nevertheless, the team has managed to keep both efforts and spirits up.

“Those guys are so locked in,” said Taylor Jenkins after the game. “We’ve shown clips of the spirit of the bench dating back to our last road trip. We know we have to have that every single night no matter who’s on the sidelines and who’s in the game.”

Heading into their matchup with defending NBA champions on Tuesday night, the Grizzlies faced the latest in a series of tests–their first back-to-back series of the regular season. These ‘baseball style’ series are a recent adjustment to the NBA schedule, implemented to reduce COVID concerns and cut down on travel in the process. Though they’re a novel experience for Memphis, the team will need to get acclimated to them quickly–the series against the Lakers was the first of five in the month of January alone.

Fortunately, the schedule changes seem to have garnered a fair amount of support within the organization. Speaking to media members before the game, Jenkins noted the format presents a multitude of unique opportunities. He noted that after a rather lopsided defeat to the Lakers earlier in the week, the extra time provided by the rematch will afford his team invaluable time to experiment on the court, fine-tuning their response to a defense that limited his squad to 94 points in back to back games. The series also provides the coaching staff with an extra game’s worth of film to pore over, better preparing the team for similarly physical defenses in the future.

As for the players, their stances on the format tended to vary by experience. Notably, the squad’s veterans seem to be in support of the measure, hastily calling out the merits brought on by the home-and-home series. “I love it”, noted Gorgui Dieng after the game. “It’s less traveling for all of us. I mean, it’s hard to play a team twice, but I love it.” Participants of the Orlando Bubble beamed about how the lack of travel allowed them to play better basketball, so it should be no surprise to hear the Grizzlies pushing a similar line of thinking after their time at the Disney campus. As the NBA continues to implement player-friendly regulations, expect veteran players around the league to push for similar scheduling to continue after the pandemic concludes.

That’s not to say that support for such a change would be unanimous across the league or even within the Grizzlies. Other evaluations of the back-to-back bordered more on lukewarm than enthusiastic. Take Brandon Clarke’s assessment: “It’s obviously different. I’m not really used to playing the same team twice a row, but I think it’s a challenge you have to do because of COVID…I don’t think it’s that big of a deal really.” Nearly all the Grizzlies appraised the series as a challenge, and not just because they happened to face off against one of the league’s juggernauts. It’s clear that this team that isn’t used to dealing with the same opponent twice, a weakness brought to the surface by the NBA’s schedule changes.

However, confronting that weakness during the regular season could pay tremendous dividends for the young team. Memphis’ roster contains an astounding lack of playoff experience–only three current Grizzlies have ever started in a postseason game (Jonas Valanciunas, Kyle Anderson, and Justise Winslow), and of those players, Winslow and Anderson have only been on the court for a postseason tipoff twice.

In a series that forces them to fine-tune their gameplan over the course of multiple games, these back-to-backs will at least serve as a decent facsimile for postseason experience. As De’Anthony Melton put it, “it definitely gives us an advantage to see what teams run and how they adjust to [our] adjustments, so everything for us is just about getting better as a team and continuing to grow.” As the team grows healthier over the coming months, look for the Grizzlies to reap the benefits of these series as they head towards their first postseason birth of the Ja Morant era.

How to Beat the Grizzlies in Three Easy Steps
The Hottest Team in the NBA: The Philadelphia 76ers