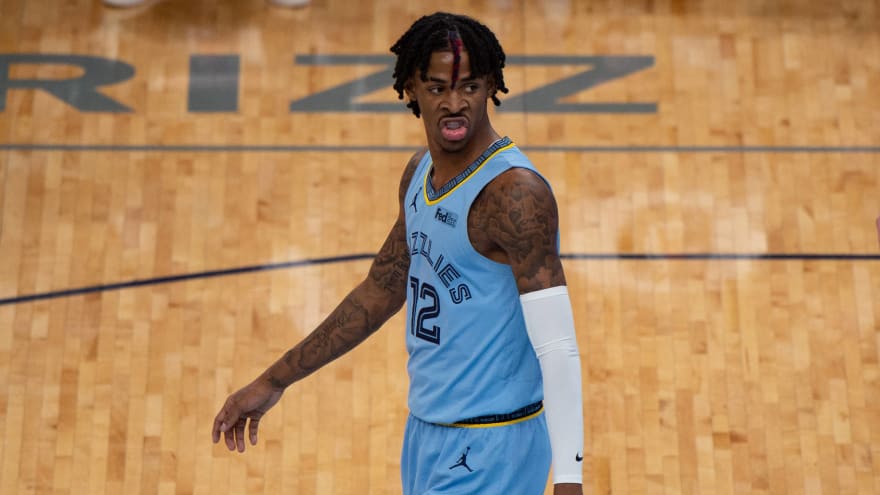 15 points, 4 assists, three rebounds. While that might be a promising statline for a rookie, it’s certainly below expectations for the Memphis Grizzlies’ Ja Morant. With the Phoenix Suns’ Mikal Bridges draped over the sophomore guard, many observers might’ve been worried about Morant’s performance, especially on the heels of an embarrassing loss against the Oklahoma City Thunder.

On the other hand, the film tells a different story. In reality, Morant’s outing against the Suns was fairly decent. Shooting woes aside, I’d even go far as to say he put on a playmaking display worthy of being applauded. But Adam, you ask. Four assists? We’re applauding a point guard for four assists? As a matter of fact, we are–though Ja’s direct assist numbers are lower than you’d expect from a passing savant, his playmaking created a myriad of opportunities that would pop up in the statsheet on a normal night.

Take this beauty of a skip pass as an example. Morant sees Mikal Bridges take a few extra steps towards the restricted area in an attempt to cover Jonas Valanciunas, so Ja expertly swings the ball to the weak side corner. It’s a wide open look for Desmond Bane, a 44% three-point shooter–he just so happens to airball it.

Follies off of Morant’s dimes didn’t just happen from the perimeter either. On this baseline drive, Morant sucks in Bridges, Devin Booker, and Jae Crowder towards him, leaving a wide open spot for Kyle Anderson to put up a close-range floater. There’s no way this shouldn’t be an assist. Unfortunately for Morant (and really the entire roster), the Anderson miss is indicative of a team-wide off night.

So that’s two would-be assists for the Murray State alum, both coming off of anomalous mistakes from his teammates. But let’s shift our focus to the Grizzlies’ made baskets, as that’s an even clearer way to see how Morant’s playmaking created opportunities for his teammates.

Morant and Jonas Valanciunas sniffed out early that the Suns were going to switch their pick-and-roll actions. As such, they got to work creating mismatches against the Phoenix defense, sticking smaller defenders on the Lithuanian big. JV steamrolled his way to 11 points and nine rebounds in the first quarter, but Morant’s efforts weren’t as rewarded in the box score. Plays like the following are a great example of why–Morant draws Ayton to defend his floater, and Valanciunas only has to contend with 6’6” Crowder to take care of the mess. Though Morant creates this opportunity, he’s only credited with the missed shot.

Though the last example followed a simple pick and roll, the Grizzlies excelled at making these mismatches last for entire sets. On this next action, Ayton never gets back to Valanciunas despite the Grizz taking nearly ten seconds to get him a look on the low block. Unfortunately for Morant, his Lithuanian compadre catches a case of the butterfingers, so the play goes down as yet another would-be assist.

Unfortunately, mistakes and miscommunications were a tenet of Memphis’ final regular season outing against the Suns. Defensively, the team never seemed to be moving as a unit. Here, Dillon Brooks and Tyus Jones can’t agree on which one of them is picking up Chris Paul until the Suns are careening into their action, forcing the Grizzlies to switch rookie Xavier Tillman onto a point guard who’s made his career draining mid range jumpers over larger defenders.

It may seem like I’m being nitpicky, but this is CP3 we’re talking about. Memphis’ two defenders with their backs turned at midcourt are practically a welcoming committee for the veteran point guard. Against a team as high-profile as the Suns, mistakes like this won’t fly if you’re already punching upwards.

Meanwhile, the Grizzlies’ offensive woes often came down to miscommunication. They only turned the ball over 11 times, but the Suns managed to score sixteen points off of those turnovers, meaning each mistake proved costly for Memphis. Take this first quarter turnover as a representative–Valanciunas thinks Desmond Bane is going to flare out for a triple, and though I’m not sure what the rookie ends up doing (his cut practically puts him on the crash course with Morant), the ball ends up sailing out of bounds, cutting off precious momentum. Shortly after this turnover, the Suns went on a 12-5 run.

So, there’s no great worry in Grind City. Off nights are to be expected, especially playing the hottest team in the league on the rough end of a back-to-back. However, given that the team still has to play ten more of them, the Grizzlies’ execution on the first leg of back-to-back series is a crucial factor in their quest for a playoff berth. Patch over the mistakes, and I’m fairly confident the team will be a factor in May. Fail to improve the team’s blunders, and the team will be in for a lot of nights like Monday’s drubbing.