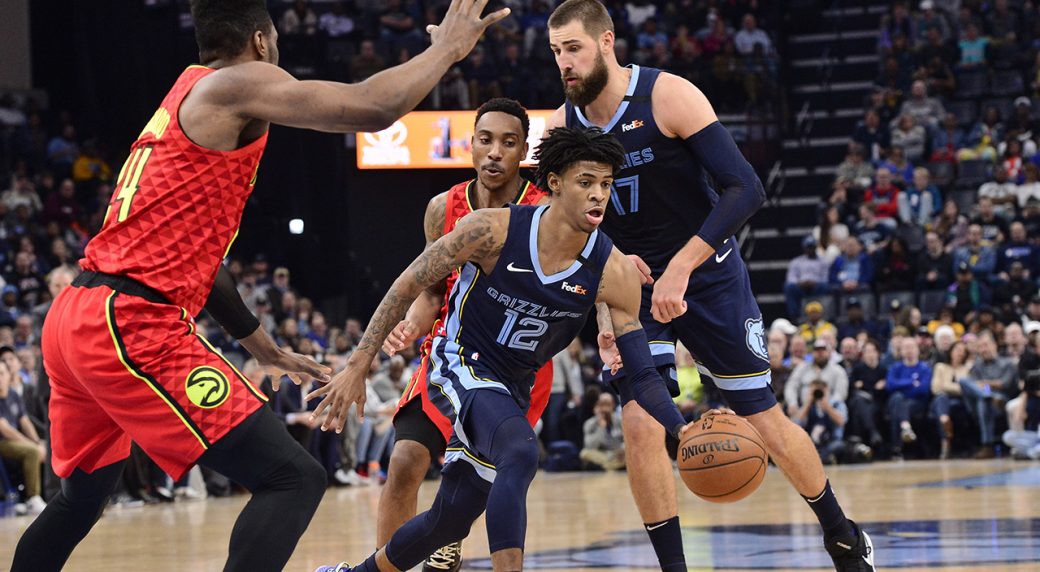 If you’ve even poked around the Memphis Grizzlies Twittersphere over the last week, you’ve probably seen the Grizz faithful gush over Taylor Jenkins new offensive system. With the Grizzlies averaging 39.5 three-point attempts over the last four games, it’s clear that Memphis is adjusting to the modern NBA, placing a newfound emphasis on balancing their classic ‘Grit and Grind’, interior style with a bit more spacing than their predecessors. Naturally, this has benefited players like Grayson Allen and Desmond Bane, who’ve been given the green light to snipe away at a moment’s notice. However, I’ve also seen life get easier for the team’s non-shooters, counterintuitive as this may be. As such, allow me to guide you through the tape of Memphis’ new offense to demonstrate the ways in which their paint-oriented stars can thrive in an offense geared to take more threes.

When you take a look at how defenses were attacking the Grizzlies, it’s easy to see why Jenkins made the switch to the team’s current offensive diet. Watch how unconcerned the Timberwolves are by Grayson Allen and Kyle Anderson here–at multiple points of the play, both corner defenders for Minnesota swipe at Morant and Jonas Valanciunas, forcing the latter to throw up a contested layup.

However, with opposing defenses in cold sweats over Memphis’ shooting, the floodgates of opportunity have opened for Morant. Look at how much space Ja has on this midrange jumper–can you imagine him being left this open during the beginning of the season? Simply put, the shooting has made the inconceivable a reality.

This dynamic even translates to the Grizzlies pick and roll actions–watch the faces of Robinson, Butler and Iguodala (all on the far side of the court), and compare them with the first clip against the Timberwolves. Whereas all the Minnesota defenders on focused on Morant, every single help defender in the play below has their back turned, focusing on the shooters in the corners. By the time they even attempt to recover, it’s far too late–few can compete with Ja once he’s in the air.

Even when the opposing defense is more focused on Morant, the team’s increase in shooting still leads to mismatches, which used to be a rarity for 12. Upon Xavier Tillman’s screen, Atlanta switches Nathan Knight (playing his first major minutes in almost a month) onto the reigning Rookie of the Year. I know the ATL likes their Lemon Pepper Wings, but this is pure Barbecue Chicken.

It’s not just guards that Memphis’ newfangled offense has managed to uplift. In fact, Valanciunas may be living the easiest life on the team right now, shooting 72.7% over Memphis’ last three games. Given that the center’s primary source of offense comes as the roll man, it probably seems obvious that the extra spacing granted would reduce the amount of defenders in his area. However, that effect isn’t limited simply to the pick and roll. Take this dribble hand off as an example. Once Ben Simmons gets behind the screen, Dwight Howard and Seth Curry are too busy defending shooters to stick onto Valanciunas.

Valanciunas has also mixed in a series of cuts to his repertoire, something I’ve long argued the entire team should do more often. On this set, Karl Anthony Towns too busy guarding Allen around a curl, so JV simply slips his screen and jaunts into the paint for his easiest bucket of the night.

Sometimes Valanciunas didn’t even have to cut in order to get a nice look at the rim. Take the following set as evidence. After Ja kicks the ball out to Anderson in the corner, a Miami miscommunication sends Bam Adebayo and Trevor Ariza running to the corner. While Adebayo should be recovering to prevent the open three, Ariza’s lack of chemistry with his Heat teammates means that nobody’s guarding Valanciunas. In previous Grizzlies games, the defense simply shrugs off Slow Mo’s attempt. Now though, Memphis is able to pick up a much more efficient bucket with a defender nearly six inches shorter switched onto the Lithuanian sensation.

Even on plays not designed for him, the new offense allows Jonas ample rebounding opportunities. Watch the entire left side of the Hawks D shift their attention towards the shooter, allowing Valanciunas the opposite side of the paint. By the time Onyeka Okongwu realizes that he’s boxing out nothing but air, JV is already going up with the putback.

Though one may not consider the New York Knicks an NBA juggernaut, they’ll pose a unique threat to Memphis during their clash Friday night. Namely, Tom Thibodeau’s squad boasts the league’s best three-point defense, a fact that could potentially derail Jenkins’ intricate schemes. Fortunately, the Grizzlies are a team used to switching things up on the fly, demonstrated by their mark +8.3 mark over their last ten third quarters. In the world’s most famous arena, the stage is set for two of the NBA’s most underrated titans to clash. One can only hope that Memphis’ streak of wildy entertaining basketball lives on.

Torrey Craig: The Suns Find Another Winning Player
Battle For The West Heats Up