Grizzlies use the Floater to ‘Float On’ to Victory 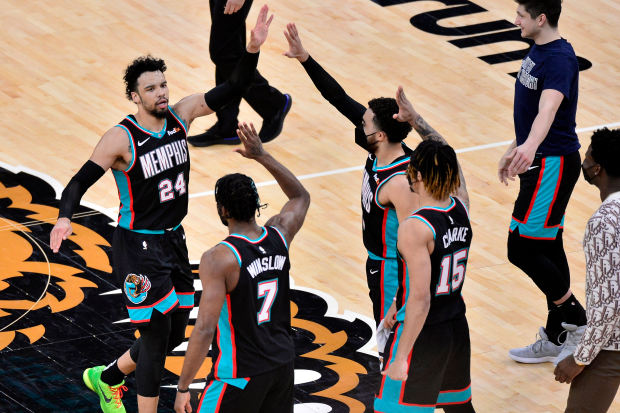 If you read my work, you’ll find out quite a few things about me–I’m a Memphis Grizzlies fanatic, a nerd when it comes to analytics, and at times prone to misspelling the name of film legend Martin Scorsese. What you may not know is that I’m also a musician. Er, a virtual one. You see, I have an extensive career as a member of my family’s band in Rockband 2, the video game of my childhood, with a soundtrack of legendary acts like Fleetwood Mac, the Foo Fighters, Steely Dan, and more. But most importantly, the game introduced me to the poetry of Modest Mouse:

And we’ll all float on, okay,

And we’ll all float on, okay

And we’ll all float on anyway

Though I’m not sure Taylor Jenkins is blasting mid-2000’s alt-rock in the locker room, he’s sure bought Isaac Brock and company’s message. As the Grizzlies PR account was kind enough to tweet out yesterday, the team leads the league with 215 floaters made. Despite playing only 33 games (about four behind league average), the Grizzlies  are leading by a country mile, as they boast a lead of 35 floaters over the second place Sacramento Kings.

More and more, the shot has become an essential weapon for the Grizzlies’ winning ways. Take yesterday’s game against the Washington Wizards as an example. Memphis put up 67 points in the first half, despite only making three triples. Instead, they did so on a mix of sheer efficiency from up close and floater range, cashing in on eight floaters in the game’s opening quarters on a total clip of 67%. This may seem like an anomaly, but keep in mind that the Grizzlies shoot a near league-high 48% from 5-9 feet and lead the league in field goals made from 10-14 feet. Memphis’ paint dominance is no aberration.

Not only were the Grizzlies hitting their floaters efficiently, they also managed to do so in numbers. Aside from the usual tear-dropping talents of Ja Morant and Tyus Jones, wings galore from Justise Winslow and Kyle Anderson were getting in on the fun. “[The floater]’s huge for us”, said Jenkins after the contest. “We inject confidence to those guys to work on [their floater]…I know it’s not the most efficient shot but we do have a lot of guys up and down the roster that when they can get to that spot and shoot it with confidence, and more often than not it’s gonna go in”.

Perhaps a secret weapon for the Grizzlies is that a hefty part of their floater diet comes from their bigs. In a league where guards like Tony Parker and Chris Paul made their names on the teardrop, rookie center Xavier Tillman is shooting a red-hot 60.9% from floater range, more than 16% above league average. That’s an outstanding mark amongst rookie bigs. For some context, James Wiseman is shooting 17.6% from floater range, and both Obi Toppin and Isiah Stewart are shooting 33.3%, meaning Tillman’s lead isn’t just a slight advantage, he’s miles ahead of his competition. Add that to Brandon Clarke’s prolific pogo-stick teardrop, and you have yourself a group of seriously talented bigs.

As a team that’s dependent on scoring in the paint, Memphis’ roster-wide floater ability is paramount for their ability to open up looks at the rim. “We know what we can do getting into the restricted area but you know at times defenses are going to put us into those floater spots… that’s a big boost for our paint scoring offense”. As the roster’s at its deadliest carving out points in the paint, the floater plays a key role to stretch out the attention of an opposing defense.

This can be especially useful against a team like Washington that attempts to play drop coverage against the Grizzlies’ pick and roll–a scheme that effectively welcomes guards to attempt floaters instead of layups. The Milwaukee Bucks are renowned for their ability to drop against pick and rolls, but look at how many of the defensive highlights below reveal opportunities to drop in a floater against the Bucks’ slow-footed bigs.

In a league obsessed with three-point shooting and analytics, Memphis’ reliance on the floater represents their tendency to zig when the rest of the league is zagging. More often than not, this has been to the team’s advantage–take the selections of Brandon Clarke and Desmond Bane. The Grizzlies were able to nab those two prospects solely because other franchises were concerned with their age. With Clarke coming off his second consecutive Rising Stars selection and Bane having just dropped a career-high 20 points, there’s no reason to doubt the team’s unorthodox ways.

Heading into a matchup with the Denver Nuggets, the floater will remain an important weapon in the Grizzlies’ holster. The Nuggets rank second-highest in the league in opponent’s two-point field goal percentage, and thus provide ample opportunity for Memphis to utilize their paint proficiency en route to an upset. With the Grizzlies still on the bubble of a postseason berth, a Denver defeat would be another impressive step towards staking their claim as one of the league’s best young cores.

The Man to Man Podcast Episode XIII: Conference Tournaments & The NFL Is Cutting Everyone
Anthony Davis Out Two More Weeks