Harden Eyeing a Return To Houston? 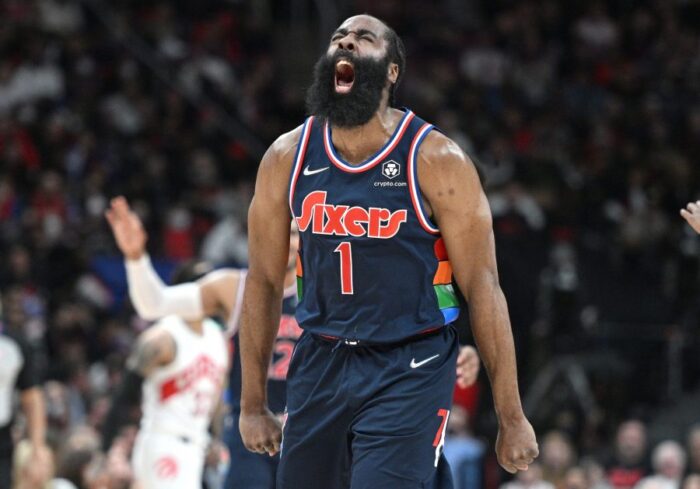 James Harden May Return to Houston

The Philadelphia 76ers have been on a decent hot streak this season, sitting at the 5th seed and going 8-2 in their last 10 games. Although All-Star James Harden and MVP candidate Joel Embiid appear to have been working well together as of late, there’s no word on Harden considering the idea of long term deal in Philly.

According to reliable sources from Adrian Wojnarowski and Shams Charania, Harden may be eyeing a return to the Houston Rockets in free agency.  This news has sparked excitement and speculation among Rockets basketball fans and analysts, as Harden is a highly skilled and talented player who made a significant impact during his previous tenure with the team.

In Houston, Harden spent eight seasons with the Rockets from 2012 to 2020. During this time, he was named an All-Star eight times and won the NBA MVP award in 2018. He also led the Rockets to the playoffs every single season, with 2018 being the closest to an NBA title run.

A return to the team wouldn’t dramatically bring back the Harden that Houston fans know and love. He would be approaching his mid-thirties. The high volume scoring 1-on-1 phenom with sheer athleticism and strength to the basket is not who he is anymore. In his prime, he focused more on scoring, averaging nearly 30 plus points per game from 2016-2020.

During his transition to Brooklyn, Harden embraced more of a facilitator role due to his aging body and more frequent injuries. As a Sixer, he is averaging 22 points and a solid 11 assists per game.

When a team needs his scoring, he can definitely turn in on. His three point percentage this year is a respectable 37% on 9 attempted threes per game. This is his highest percentage from deep since his 2018-2019 season.

Houston is a special place for Harden because of the culture he cultivated for 8 solid years. Woj says that Houston has a “magnetic pull” on Harden, which describes a comfort and familiarity factor should Harden consider putting back on the Rockets uniform.

But that doesn’t mean Harden wants to leave Philadelphia. The 76ers have been doing well lately and Harden has been playing well with his teammate Joel Embiid. If the team keeps doing well and goes far in the playoffs this spring, Harden might want to stay with the team.

Impact on the Young Core

If Harden decides to return, how will it affect the young core development of Jalen Green, Kevin Porter, Jabari Smith, and Alperen Sengun? For starters, the former MVP will definitely be in the starting lineup, taking up Porter’s spot. Porter will likely be a sixth man, which could cause some tension within the team. This will also create a domino effect on the rotation. Drafted players in the rotation such as TyTy Washington will have reduced minutes because of Porter moving to the sixth man role, causing a slight development halt within the roster.

Also, why would Harden even want to return to the team at this stage in his career? He supposedly wants to chase an NBA ring, and the current situation he’s in right now is in win now mode. Barring Joel Embiid’s injury history, the Sixers have a real chance to make a deep run in the playoffs. If they fall short in the postseason and Harden doesn’t want to play there anymore, that’s normal.  But to go to a team in the middle of a rebuild with no significant strides? It doesn’t make sense.

On the bright side, Houston will be a much better team. Harden will greatly improve their offense and reduce turnovers. Jalen Green won’t need to facilitate the offense as much, and Jabari will have more opportunities with catch and shoot threes. Alperen Sengun’s pick and roll ability is also improving, which is Harden’s specialty. Also, this is Eric Gordon’s final year on his contract with Houston. Harden can definitely swoop in as a veteran leadership replacement

Due to young core’s inexperience, it’s likely this won’t be enough for a deep playoff run. Realistically speaking, this has the makings of an 8th seeded team with a first round exit next season.

At $45 million in cap space next offseason, they do have enough money to sign him Harden as a free agent. This will be no easy task however, as he will likely want a large salary with a short term contract. This prevents Houston to take a bulk of their cap space to sign him, preventing any long term signings in the future to compliment their young core.