History is Made at Mark Sasso Charity Softball Game 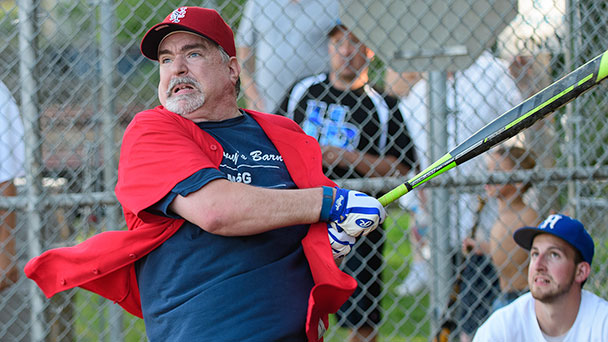 ESPN radio host Don La Greca and radio host and former WWE 24/7 Champion Peter Rosenberg, along with others gathered at WAG fields in Hawthorne, New Jersey for the Mark Sasso Charity Softball Game. Sasso’s wife Anna Marie started the foundation in 2008 after her husband lost a three-month battle to cancer. Sasso, a good friend of La Greca, was the headliner of the event. Growing up in Hawthorne, they both played on the same field as kids where the event is held every year.

In addition to the game, there was a raffle table going on near the snack stand with some great prizes including a 55’ inch television. ESPN radio in the back of the parking lot also had cornhole set up, where fans can win some cool prizes. An auctioned Jacob deGrom jersey, autographed by team ESPN, sold for $325, was added to the event.

After a one hour and 18 minute rain delay, the game finally started in his honor. This is the 14th game in Sasso’s honor. So far, they have used the money to build a playground at St. Anthony’s where Sasso was a parishioner and gave away about $37,000 dollars in scholarship money to Hawthorne residents going to college.

“In the $40 or $50,000 dollar range,” La Greca said of how much money he expected the event to raise. “I don’t know how the rain is going to affect us here, but we usually do really well. They listen to the Michael Kay show, they donate money so usually we are talking tens of thousands of dollars,” said La Greca.

Unfortunately, after only a few batters faced, the game was canceled due to rain and thunderstorms. This was the first time in the history of the Mark Sasso Game where the game was rained out.

In order to determine who plays La Greca and company, hopefuls compete in a tournament and the winning team pays to play La Greca and his team. Even though there were only three batters faced due to weather, anyone there could tell they were still a good team as the first batter sent the ball onto the roof of the snackstand and absolutely crushed the ball.

Even with the weather, there was still a decent turnout as fans were gathered in their rain gear and their umbrellas.

“I love it, when we first started it, I was always apprehensive like who is going to come all the way to Hawthorne for a charity event like this,” said La Greca. “I’m always blown away by the amount of people even today like you said, it was a good turnout considering it’s been raining for a few hours and affected everything,” said La Greca.

In addition to the event and the game, it was good for the players who got to see and meet new people. It was a unique and cool experience for the fans who had the privilege to meet La Greca, Rosenberg, Danielle McCartan and many others whom they have always admired.

Even though the game was eventually canceled, it was a wonderful outing to pay tribute to an amazing man who has left an indelible impression in the hearts of all those who knew him. Every year, rain or shine Sasso’s legacy lives on and thousands of people still donate for a good cause.