Kicking “Aimee” Out of the Book Club: How Jedrick Wills Jr. Became Baker Mayfield’s Wingman on The Progressive Ad Campaign 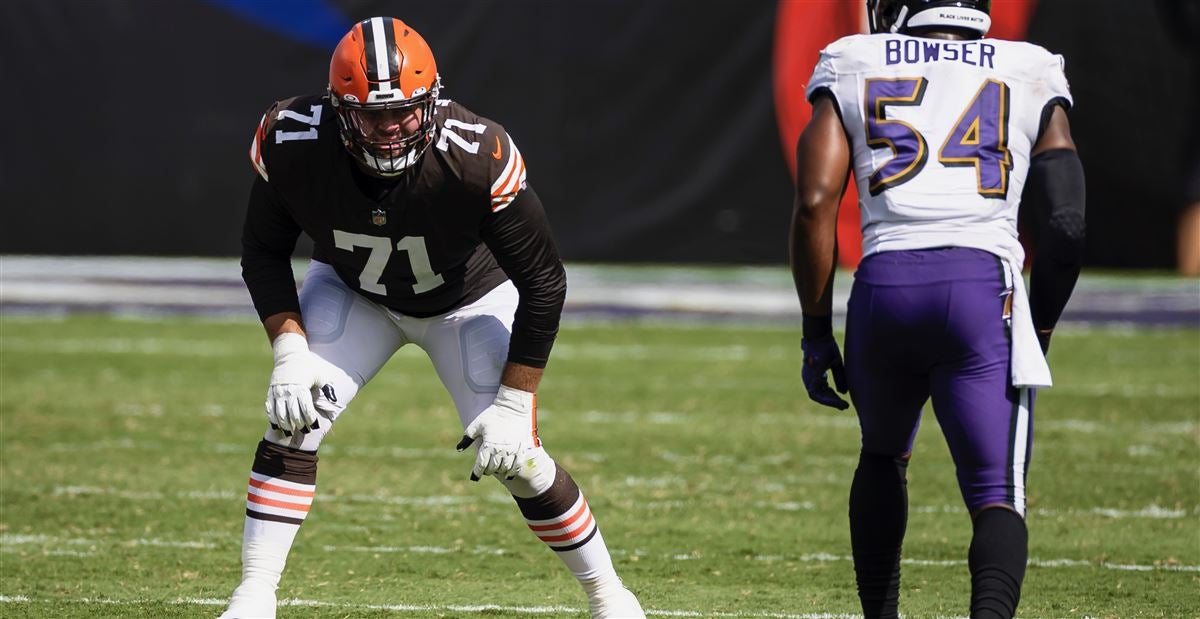 By now, everyone has seen Baker Mayfield in the Progressive commercials. In 2019 Progressive chose to do “season one” of “At Home With Baker Mayfield” advertising campaign. In season one we saw Baker expecting company at First Energy Stadium and Baker as he prepares for rain at the Brown’s Stadium. Progressive chose to shoot season two of “At Home With Baker Mayfield” for the 2020-2021 NFL Season. Cleveland fans will admit that the commercials are a lot funnier now that the Browns are winning. They weren’t even remotely funny when Freddie Kitchens was calling trick plays and abandoning the run during the 2019-2020 NFL season. However, this season Baker has a new wing-man in this year’s commercials, and it’s someone nobody really saw coming.

When local television stations would come to Lafayette High School before football season, Jedrick Wills Jr., still in high school at the time, wanted nothing to do with the cameras. He had to be encouraged by his high school head coach, Eric Shaw, to even say a few words.

Obviously Wills Jr. is more comfortable in the spotlight after starring at Alabama and being the 10th overall pick in the 2020 NFL Draft. However, he never thought he would be a part of a large advertising campaign like Progressive’s “At Home With Baker Mayfield” campaign. His high school coach, Shaw, even chuckled a bit when he saw Wills Jr. in the commercials. The real question is, how did a rookie offensive lineman become Progressive’s go to guy behind Mayfield? Well it’s pretty simple. It basically came down to availability, affordability, and a bit of anonymity.

Progressive business leader of creative development, Matt Dillon, said that they did reach out to Baker for some names and suggestions. In the end it just worked out.

“It Couldn’t Be Someone With the Same Notoriety as Baker”

“Baker’s still the star. It’s his house,” Walsh said in a November phone interview. “We weren’t looking for a big, big name to go head to head with Baker. “We were looking for someone with the — no one’s ever said this before — but more like Batman and Robin.” (Akron-Beacon Journal)

There were a lot of pieces that had to fall into place to land Wills Jr. in the commercials. Progressive needed someone who was reliable, available when they were shooting, and someone who would have good chemistry with Baker on-camera. All the shooting was done a week before Browns training camp began in July. Wills Jr. was still looking for a place to live in Cleveland when his agent, Nicole Lynn, presented him with the opportunity to be Baker’s “protector” in the ads. Dillon also confirmed that Wills Jr. as the protector was part of the initial concept.

After being drafted 10th overall in the NFL draft, Wills Jr.’s first steps at First Energy Stadium were for the shooting, and it was also his first time meeting Baker Mayfield in person. The COVID-19 pandemic made meeting face to face tough, though Wills Jr. had seen Baker on Zoom calls.

Wills Jr. said that he and Mayfield can always laugh about the first time they met.

“We chummed it up a little bit. Him being my teammate we have a good bond, anyways, but it was something fun to do outside of football,” Wills JR. said in a phone interview. “He’s done this a lot. I remember I used to see him on TV when I was still in college.” (Akron-Beacon Journal)

This season Wills Jr. has appeared in two of the Progressive commercials. The first one being when he called on the Book Club to kick “Aimee” out of the group. His second commercial was much easier, as he and Mayfield played video games in First Energy Stadium. Both players were encouraged to engage in normal “video game banter.” That commercial only took half an hour to shoot. The Book Club commercial, on the other hand, took about two hours to shoot because of the different camera setups.

“Having an offensive lineman, a 6-foot-4 juggernaut being part of the book club and sharing his thoughts and feelings, the juxtaposition is what made it so special. Absolutely, he delivered,” Dillon said. (Akron-Beacon Journal)

Wills Jr. said he is hoping to do more of the commercials with Baker. Seven episodes of season two have already aired, and it’s possible that two more will air during the NFL Playoffs. However, right now Progressive has been quiet about doing a season three of the campaign. This season, however, has been great for Progressive.

“We’ve gotten phenomenal feedback on the campaign from an analytics perspective as well as feedback we’re seeing in the sports industry and the marketing industry,” Walsh said. (Akron-Beacon Journal)

The Browns take on the Chiefs tomorrow in Kansas City, in the divisional round of the NFL Playoffs. Browns fans will all hope to see more commercials, because more commercials usually mean one thing: The Browns are still playing!

Destination Jobs: Ranking the Head Coach Vacancies
Points, Points, Points! Let’s Take a Look Back at the Mayfield and Mahomes Match-Up in 2016