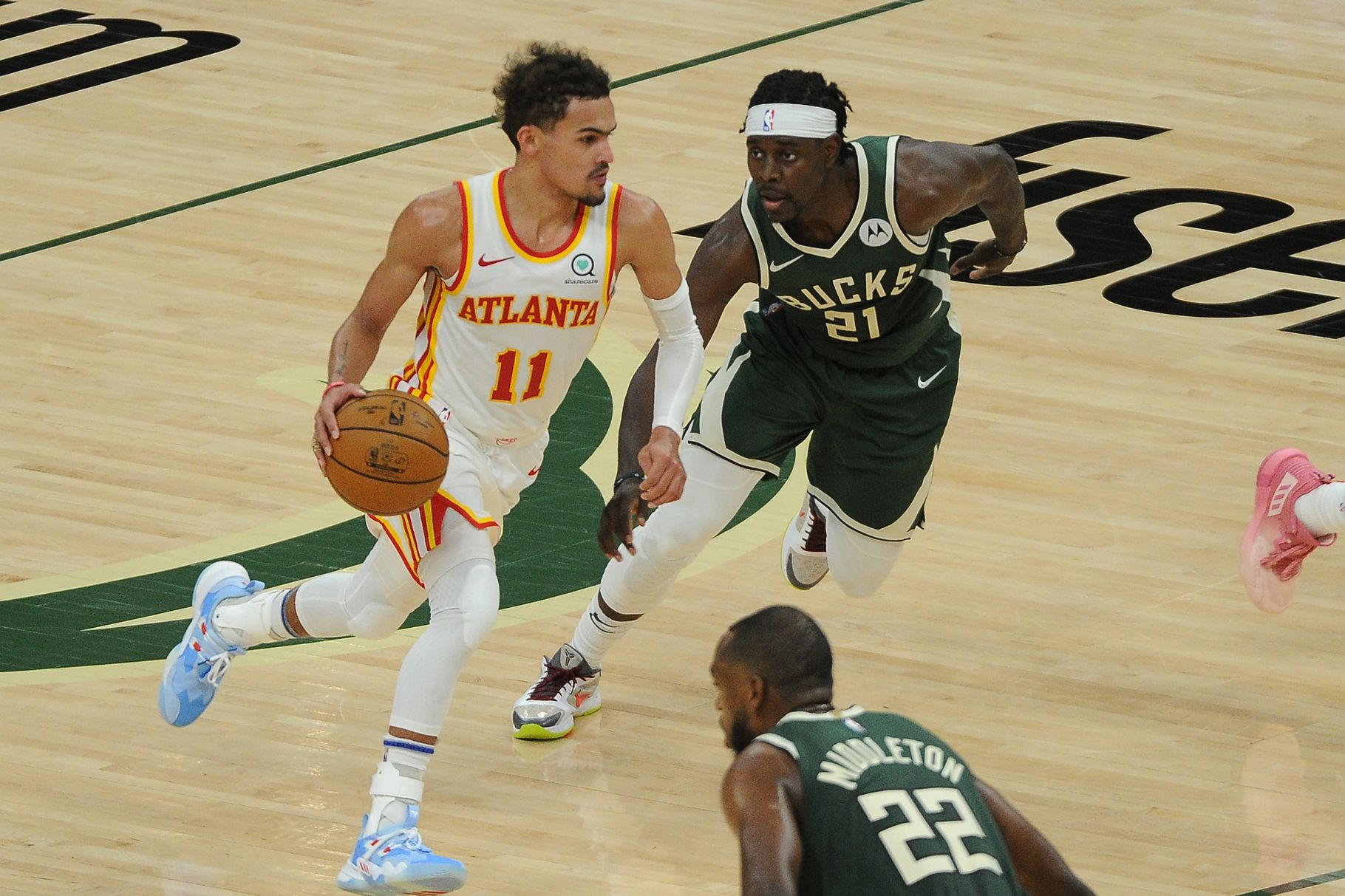 The Atlanta Hawks may be facing title favorites, but they have the tools and momentum to continue defying the odds and make the NBA finals.

How the Atlanta Hawks got Here

The last time a four seed made it to the NBA finals was the Lebron James led Cavaliers in 2018, but only one four seed has ever won it all. Back in 1969, the Boston Celtics repeated as NBA champions after they defeated the number two seeded Los Angeles Lakers. Moreover, the Atlanta Hawks have not even made a finals since then, as their last appearance dates back to 1961. Reaching this coveted championship series alone would be quite the story considering their franchise history, but to do so with this year’s squad would be even more impressive.

Atlanta was approaching the All-Star break with a 14-20 record when they decided a change was needed. In his three years with the Hawks, Lloyd Pierce posted an abysmal winning percentage of just over thirty-four percent. Following an offseason with a number of big name signings and expectations of improvement, the Atlanta Hawks were off to a disappointing start. So, the team decided to move on from Pierce and bring on Nate McMillan as their interim replacement.

Since then, Atlanta saw dramatic improvements and ended the regular season with a 41-31 record. Entering this season’s eastern conference playoffs, many considered Brooklyn and Philadelphia to be runaway favorites to represent the east in the finals. Whereas, Milwaukee was thought to be a contender but was unfortunate in the fact they had to get past the Nets. Atlanta was not even a thought either. Some even thought they would not make it past the first round and the New York Knicks.

Despite this, the Atlanta Hawks came out angry against the Eastern Conference regular season champs and stole game one in Philly. The series went on to be very back-and-forth, but the Sixers simply looked off and not on-par with their normal play. In contrast, Giannis and the Bucks went down quickly and looked absolutely horrific. The series looked to be over after they went down two games to none. However, Milwaukee, thanks to a Kyrie injury and Joe Harris shooting like Ben Simmons, went on to win four of the next five, including an incredible game seven overtime victory.

The Atlanta Hawks Keys to Success in this Series

The immediate concern for Atlanta should obviously be restraining the two-time MVP. This task alone is a difficult one, but when you consider the defensive struggles Atlanta has had, the mountain becomes even greater. However, as shown in recent playoffs, Giannis is simply not a one-person task, so as long as Atlanta can maintain a wall to stop him from getting downhill, then some sort of cap on Giannis can occur.

Despite Giannis being considered the biggest threat on the Milwaukee Bucks, it is the success of his surrounding cast that really makes or breaks their chances. The primary key to this series for Atlanta will be in the point guard matchup.

Trae Young has established himself as one of the premier scoring guards this league has to offer. His ability to drop bombs from anywhere on the court, as well as his passing out of double teams makes the Atlanta offense quite lethal. But, Milwaukee will have a valiant competitor on the court trying to slow him down.

Jrue Holiday has been widely acclaimed by his peers as one of the most infuriating and skillful defenders in all of basketball. Last series, Holiday faced two difficult matchups in James Harden and Kyrie Irving. Kyrie played pretty well up until his injury, but Harden definitely struggled in his return. He was still laboring an injury, but Holiday and the Bucks were able to hold him to a disappointing 30.5% shooting from the field. Holiday’s defense looks to be holding up in the playoffs, whereas his offense is the bigger issue for Milwaukee and something Atlanta should hope to keep down.

The Milwaukee Bucks spent big on the veteran guard in the offseason in hopes of finding a better two-way running mate for Giannis. And for most of the season, it looked to be money well spent. His presence on both sides of the floor was noticeable and immensely more important than Eric Bledsoe had been in previous years.

When the playoff rolled around, though, the same problem was occurring. Jrue averaged 17.7 point per game on 50.3% shooting from the field, with a 39.2% three-point percentage in the regular season. In the playoffs, Jrue is only down 2.5 points a night, but on significantly worse shooting at 39.8% from the field and a horrendous 24.6% from deep. Continuing this trend and not allowing Holiday to pick things up offensively should be a key focus for Atlanta. By forcing him to take contested jumpers off the dribble, Trae Young or whomever Atlanta choses to mark him should be able to contain Holiday’s offensive production.

In the regular season, these two squads faced off a total of three times. Milwaukee came out on top two of those three times, but a big reason for the one loss was Bogdan Bogdanovic. After spending three seasons in Sacramento, Bogdanovic was a free agent and was looking for a new home. The Bucks were in dire need of shooting, something he is very good at. So, Milwaukee made a move and leaked a sign-and-trade for Bogdanovic. A move that was not only announced prior to teams being allowed to make trades, but also before the player even approved of the deal.

Consequently, Bogdanovic denied the trade and Milwaukee was stripped of a draft pick. The sniper guard then later signed with Atlanta and left Milwaukee empty handed. His time in Atlanta was inconsistent with him playing amazing sometimes and then disappearing other nights. However, during their matchups against Milwaukee, the Serbian guard thrived and even carried the squad to a comeback victory without the help of Trae Young.

In fact, two of the three times these teams played this season were without Young’s assistance. In those two games, Bogdanovic played All-Star level ball averaging thirty points-per-game with field goal and three-point percentages over fifty-two. His success, along with the other wings on Atlanta’s roster, is a vital aspect of their offensive success. Young will likely be doubled frequently, while the lob threat will be reduced with Giannis and Brook Lopez on the floor. Therefore, having players like Bogdanovic, Huerter, and even Louis Williams shoot confidently and successfully is quintessential towards Atlanta advancing.

There are lots of keys to this series that will allow Atlanta to continue this Cinderella run. Trae Young being Trae Young, and the Hawks’ D stopping Giannis from being Giannis is atop that list. However, withholding the secondary stars Milwaukee has and forcing them to take contested, poor shots is just as important. Not allowing Khris Middleton nor Holiday to shoot like they should will force the Bucks into panicking, thus relying heavily on Giannis. His solo-success in the half-court is not super impressive, as he frequently falls back onto his questionable jumper, something every team rejoices over.

The Atlanta Hawks’ side of things relies upon their momentum. Some had them losing to New York, few had them even contending with Philly, and almost nobody expects them to make it to the Finals. To do so, they must continue running their explosive offense and not overly depend on Trae Young to carry the load. His teammates scoring and getting good looks is just as vital to their success as him. If the Atlanta Hawks can control these things, they should be in a place to upset Milwaukee and make it all the way to the NBA finals.