“Screw That, We’re Going to Win It.” In a Tale of Two Halves, Baker Mayfield was Feeling Dangerous Yesterday 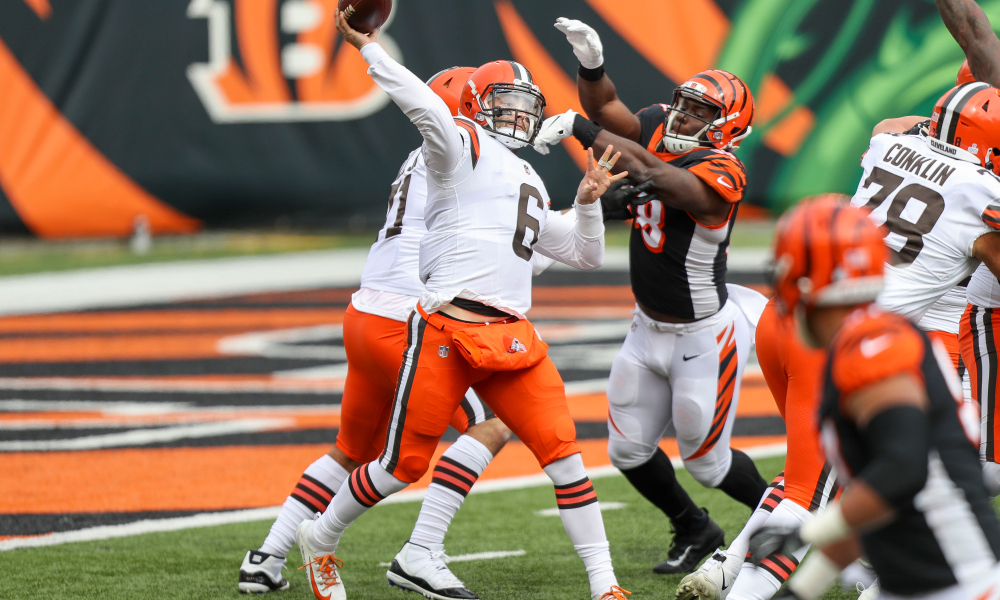 As Browns quarterback Baker Mayfield left the locker room after halftime, he looked down at the newly injured Odell Beckham Jr. and told him he loved him. In his first pass of the game Mayfield tried to force a deep ball to Beckham Jr. that was picked off. OBJ was injured while running back to tackle Darius Phillips, who was the man that intercepted Baker’s pass. Mayfield was frustrated and blamed himself for the injury. However, after he told Beckham Jr. he loved him, Odell responded with fire in his eyes, “Go be Great.” With the way this game went, that was a possible turning point in the Browns season.

Yes, the Cleveland Browns are 5-2, and they have the whole city believing this team can be a winner for the first time since their return in 1999. After missing his first five passes, that included one interception, the Baker train was slowing down to almost a standstill. However, after OBJ told him to, “go be great,” he was a whole new quarterback in the second half. After starting 0-5 to start the game, Baker completed 22/23 passes in the second half. The one and only pass Baker missed was a spiked ball that stopped the clock on the opening drive.

In the end the Browns found a will to win again. Mayfield was a man on a mission, and that mission was a success. Cincinnati is really not a good team right now. However, rookie quarterback Joe Burrow shows no fear when he’s out on the field. In the loss Burrow was 35/47 for 406 passing yards and three touchdowns against one interception. Cincinnati is in the right place to keep building and have a successful team in the near future. Even with Burrow’s numbers, this game was all about Baker Mayfield.

Mayfield was obviously very frustrated in the week before against the Pittsburgh Steelers. He struggled with Pittsburgh’s defense and only threw for 119-yards with one touchdown and two interceptions. One of those interceptions was a pick-six by Steeler safety Minkah Fitzpatrick. Coming into Sunday, fans and pundits were very low on Mayfield. They didn’t know if he was the man for the job. However, even though it was the lowly Bengals the Browns beat, it’s a major step forward and a confidence booster for the signal caller from Oklahoma.

On Cincinnati’s first drive, the rookie Burrow took the Bengals down the field to the two yard line before a batted football was intercepted by Browns linebacker B.J. Goodson. However, as we went over before, Mayfield gave it right back to the Bengals with his only interception. With the interception returned deep into Browns territory, Burrow got on the board with a 1-yard touchdown run on a quarterback sneak.

The Browns went three and out after the Cincinnati touchdown, however here comes that man again! While Burrow and the Bengals were driving, Myles Garrett came off the edge to strip sack Burrow. The ball was recovered by Browns safety Ronnie Harrison Jr. Not being able to cash in on the turnover completely, the Browns kicked a field goal to make the score 7-3 Cincinnati.

The Bengals responded with a field goal of their own to make the score 10-3. On the ensuing Browns possession, the Brown’s offense marched down the field and Mayfield threw a three yard touchdown to rookie tight end Harrison Bryant. The Bengals were able to have the last laugh at half as Burrow threw an eleven yard touchdown pass to Tyler Boyd to take the Bengals into the locker room up 17-10.

Other than OBJ telling Baker to “go be great,” something else happened in that locker room. Nobody has any idea what it is, but whatever it was, it changed the outlook of the game completely. After half, Mayfield took the Browns down the field and punched it into the end zone with another Harrison Bryant touchdown reception to tie the game at 17. On the ensuing drive the Bengals were held to a field goal, making it 20-17 Cincinnati.

The Browns started the fourth quarter with a Mayfield to David Njoku 16-yard touchdown pass to put the Browns up 24-20. From then on the game was incredibly exciting and saw Joe Burrow and Baker Mayfield lead their teams on multiple drives in the fourth quarter.

The Bengals then responded with a very well-managed 12-play touchdown drive that ended with a Burrow pass to fellow rookie Tee Higgins in the end zone. The pressure was now back squarely on Baker Mayfield and the offense to respond. They did just that as they marched down the field on a seven-play drive that was capped off with a Mayfield to Kareem Hunt eight yard touchdown pass.

Now it was Burrow’s turn to lead a drive for the Bengals. Burrow drove the Bengals down the field on a 10-play drive that took up nearly four minutes. Burrow connected with Giovani Bernard for a three yard touchdown. It seemed like the end for Browns fans. With just over a minute left in the game, Mayfield needed to play nearly perfect to get the Browns down the field.

Cleveland started from their own 25-yard line and they had just over a minute to get into field goal range for the tie. Mayfield found rookie Donovan Peoples-Jones over the middle for 13 yards to start the drive. After a replay that upheld a pass caught by Rashard Higgins, Baker Mayfield hit it big to Higgins again for 30-yards. The offense rushed down the field and spiked the ball to stop the clock. Finally, with 16 seconds to play the Bengals used their last time-out. With the ball and 16 seconds left in the game, the Browns were in field goal range, and it looked as if they would place the game and possibly the season on the leg of Cody Parkey. However, instead of staying conservative, the Browns attacked. Baker came to the huddle and told his teammates to screw the field goal, we’re going to win it. On that next play, this happened:

What a pass, and what a catch. Darius Phillips of the Bengals was draped all over Peoples-Jones, and had he located the ball a little bit sooner it would have been an interception. However, for once, a higher power was on the Brown’s sideline yesterday and Peoples-Jones made an outstanding catch to win the game. Also, the ball-placement on that throw ended up being just perfect. Throw it where Peoples-Jones can catch it, or where no one can catch it.

After the connection between Mayfield and Peoples-Jones, the Bengals had the ball at their own 25. With just four seconds left on the clock, Burrow heaved the ball all the way to the end-zone. It seemed like the throw was in the air for a whole minute. In that time, all Browns players linked their arms together and stood together, hoping that they had indeed won the game.

In the end the ball was deep enough, and it was indeed a good throw. However the ball bounced around in the air for less than a second and hit the ground after it bounced off of A.J. Green’s face mask. You could hear the sigh of relief in Cleveland all around. In the end, Baker Mayfield is still the man, for now. His second half performance was one for the ages, and it will be a game that Browns fans remember for a long time. The Browns are 5-2, with a possibility to go 6-2 before the bye, as they host the Las Vegas Raiders next weekend.

Did Mayfield still have some bad plays? Of course. However, today he was the man for the job. 22/23 is incredible, and it matched his quarterback rating from yesterday which was 136. What a game, what a team. Could it possibly go sour in the future? No doubt about it. Today, though, we celebrate Victory Monday. Hopefully there are more Victory Monday’s in the Cleveland Browns immediate future.

The Chargers Get Their First Win Of the Herbert Era
Dawg Pound Report: Post-Game Pressers, Injury Updates, and Other News from Berea Today