Injuries, Load Management After a Week – Did the NBA Start the Season Too Soon? 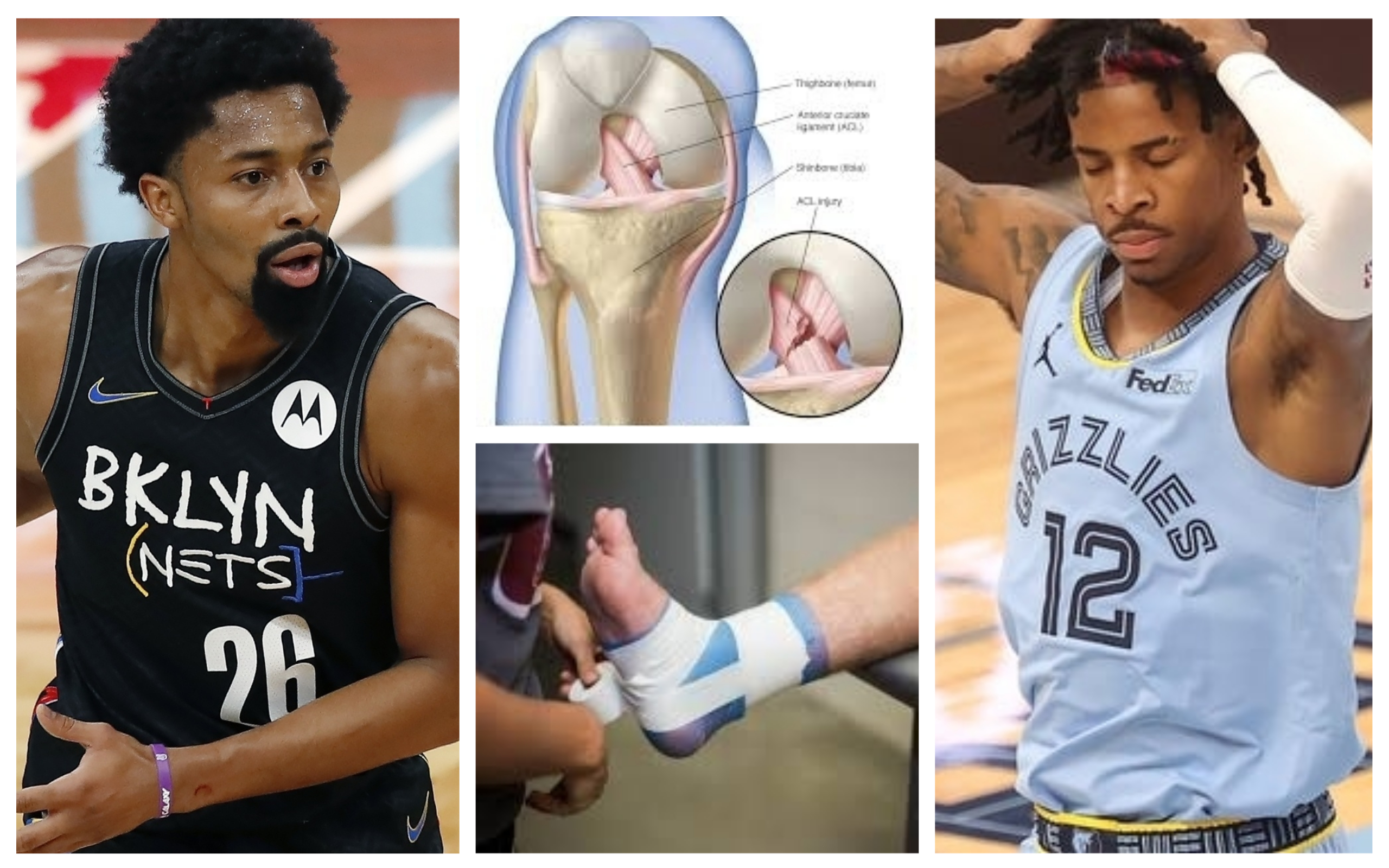 Seventy-two days. A week in, we've lost Spencer Dinwiddie for the season, and Ja Morant 4-5 weeks, while star players are already invoking load management. Did start too soon? It had only been 72 days ...

As COVID-19 continues to run rampant all over the world, and all over our country, our families, our lifestyles, and our beloved sports leagues, the social distancing, isolationism, and games without live fans is costing business money.

Not that we expect you to feel sorry for the guys who’ve become instant millionaires to play sports that we play for fun in our driveways and playgrounds for free, especially when your Uncle Burt and Aunt Sue are struggling to keep their diner going, the local pizza joint, or the corner grocery.

But sports have always been our escape from the stresses and harsh realities in life, and though we rarely remember them as such, they are businesses as well.

Businesses that have to pay exorbitant salaries. I saw quite a few contract extensions and salaries rise over the off-season.

Businesses that impact the cities in which they’re located. After all, they employ concessionaires, ushers, and maintenance people from their local communities.

At one point over the summer, NBA Commissioner Adam Silver alluded to the fact that the league could lose almost $1 billion ($900 million) if the season was lost – and that was just in TV monies.

There were but 72 days in between the end of the 2020 NBA Finals and the first tip of the 2020-21 NBA season that just got underway last Tuesday. Teams were out over twice that many days due to COVID-19s outbreak and the stoppage of play from March to August.

So to say the NBA rushed back might be a bit of an understatement.

Barely enough time to scout, complete the 2020 NBA Draft, have a whirlwind free agency period. Not enough time to get people where they needed to be – veterans and newcomers – and get into proper conditioning. And certainly too many restrictions on off season activities – like private showings that were definitely not in a strip club.

Load management for superstar athletes 2-3 games into the season.

My 55 year old outta shape ass can run more than two games in three days down at the Boys & Girls Club. Hell, I can run two in a day. Maybe even three … she’ll be wanting to marry a brother.

Injuries. Yep, we’ve got them already.

Morant went down last night after landing awkwardly on Timothe Luwawu-Cabarrot’s foot in last night’s win over the Brooklyn Nets, and will be out 3-5 weeks after doctors looked at him today.

It was determined to be a Grade 2 sprain, very painful, as one could see in Morant’s grimaces as he left the floor. He returned in a walking boot to cheer his team on, but those things take awhile to heal. I know personally. I suffered a Grade 3 sprain when I played basketball in the military, and was told by my base doctor that I’d have been better off if I had broken it.

So who’s going to fill those minutes?

It’d certainly be nice to have Jaren Jackson, Jr. back, but he is still rehabilitating from knee surgery. He injured his knee three games into the bubble in Orlando, the same knee he had sprained back in February. Justise Winslow might be on a faster track to return to play in what would be his debut as a Memphis Grizzly. He is rehabbing a hip injury.

Bane, the 30th pick of the draft, had a decent run at TCU before having his name called by the Commish, playing all four years and getting better every year. He finished with an average of 12.7 points per game, 4.7 rebounds, and 2.4 assists. By comparison, Morant’s numbers after two seasons at Murray State were 18.7 ppg, 6.1 rpg, and 8.2 apg.

Bane has yet to play more than 57 minutes of basketball through three games this season, so may be a little hesitant and/or raw. That’s not what the Grizzlies need – they need someone to step up sooner rather than later.

In the next five weeks, they have teams like Boston, Charlotte, the Lakers twice, Cleveland twice, Brooklyn again (this time presumably with Kevin Durant and Kyrie Irving), Minnesota twice, the 76ers, Portland back to back, Sacramento twice, the Bulls at home, the Spurs 2x, and the Pacers, Rockets and Pelicans, all before Morant is slated (at the outside time frame of five weeks) to return.

Twenty games in which they could conceivably go 9-11 at best without Morant. Hopefully docs are wrong and he heals sooner rather than later. But why rush it? It’s the West. Tough to crack that eighth seed.

Dinwiddie might be an easier loss to deal with; nonetheless, he is out for the remainder of the season with a torn ACL that will be operated on next week. And while his numbers don’t jump off the page after three games behind the likes of Durant and Irving, remember that this is a guy who had leadership and the onus of carrying the team thrust upon him not only when D’Angelo Russell got injured two seasons ago, but again last season when Russell left for Golden State and then Irving left to explore the flat earth, tend his sage garden, and feign injury to wait until he could run with Durant 100 percent healthy. (Okay, he had a shoulder impingement, at least that was the official word – but that could have been just too much shrugging for all we know).

The onus of Dinwiddie’s role, minutes, and scoring punch will fall somewhat to Caris LeVert, but mainly to Luwawu-Cabarrot, who is averaging 10.3 points through four games so far this season.

Kevin Love of the undefeated Cleveland Cavaliers has a right calf strain that will be evaluated again in 3-4 weeks.

Furkan Korkmaz of the Philadelphia 76ers will be out about two weeks with an adductor strain.

Torrey Craig has a fractured nose. Kawhi Leonard has a laceration that took eight stitches to fix.

And then there’s these guys …

Half the league’s stars took the night off over the last night or two – after just two games.

As a colleague pointed out, you didn’t grow up watching the star players (do this through) an 82 games schedule … they got hurt, they taped it up, and kept playing.

“Can you imagine Michael Jordan, Hakeem Olajuwon, Magic Johnson, or Larry Bird sitting out a game when they weren’t hurt?”

No, I can’t. In fact, I remember Magic Johnson playing. Announcing his illness. Coming back to play. And then playing in the Olympics. Other players’ uneducated, uninformed, and fearful biases were more of an obstacle. And he overcame that, as well.

Kareem Abdul-Jabbar may be on to something … NBA fans may be being cheated.

While I’m not saying NBA players should be like Rugby or Australian Rules Football (Footy) players to be considered athletes, there should be a little personal pride there.

I mean I would love to be able to go into my office tomorrow morning and tell my bosses I’m just going to sit there and watch everyone else work, and get paid to do so. But I’d be out on my ass so fast, it’d make my head swim.

Did we bring them back too soon? Players like LeBron James wanted a January 18th start.

But I get it, from the league’s perspective – they’re already losing revenue streams from TV to concessions to apparel sales.

And I get it from the players’ perspective – it’s their body and that’s how they make their money. So they’ve got to protect it.

It’s probably easier this year because there are no fans to upset, that paid an exorbitant ticket price for a once-a-month, once-a-year, or once-in-a-lifetime experience with their kids, their spouse, or their families.

At least take the time off the old-fashioned way … hang out with James Harden … that’ll get you seven days of rest.

In the meantime, let’s get back out there and play what’s already a shortened season.

Until people can do that, we need to pause on the G.O.A.T. conversation – these guys don’t have what it takes right now.