Inside The NHL’s Courtroom 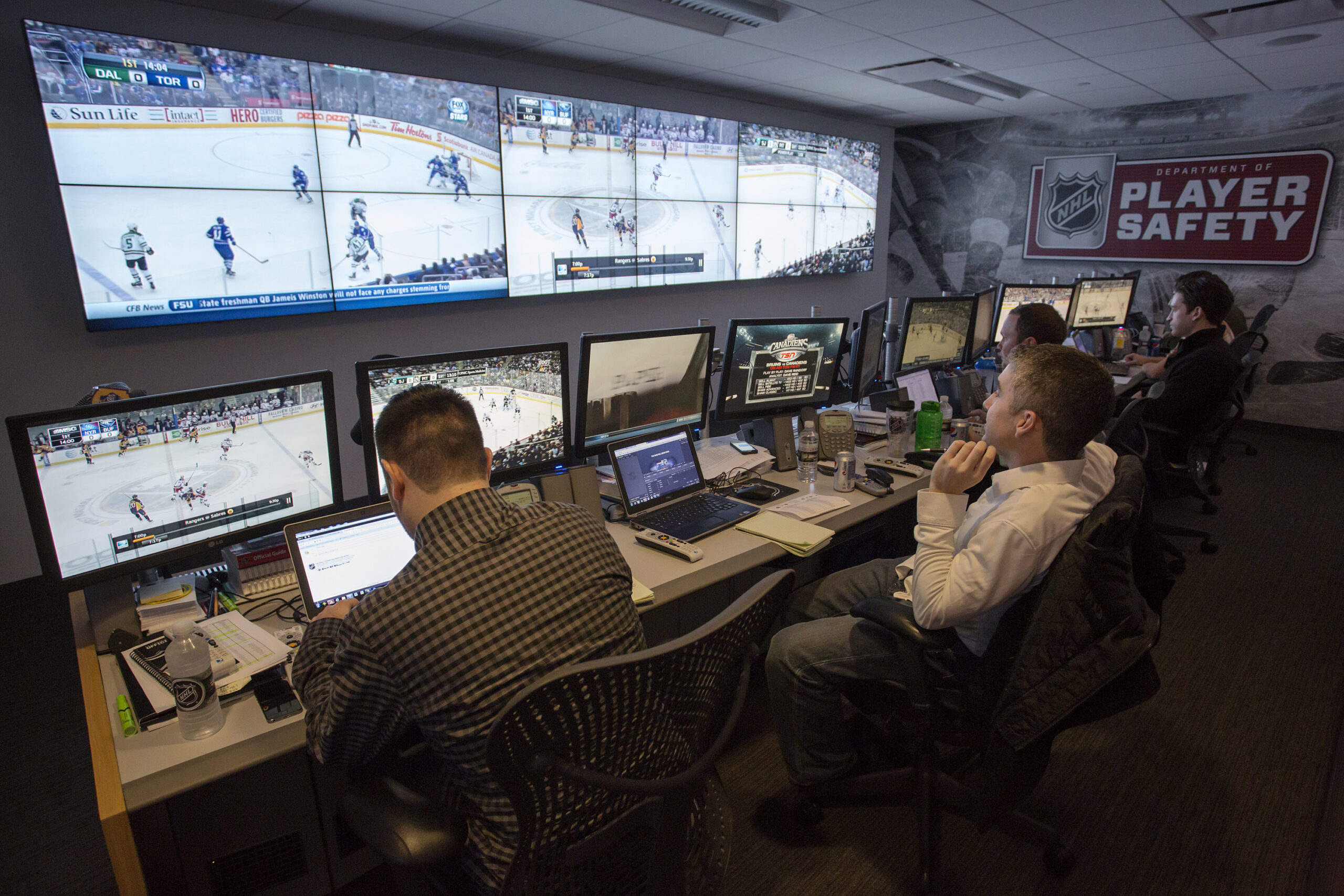 The closest thing the NHL has to a justice system is the Department of Player Safety who reviews calls and provides punishments to players who break the rules. To the average person, it might seem like the DPS, as it will be abbreviated in the rest of the article, is a nameless conglomerate of people in suits who fine and suspend players for illegal hits and cross-checks. But, there is more to discover behind the scenes.

From the League headquarters in New York City, the DPS watches every single broadcasted NHL game from a video room. The video room consists of 25 high-tech monitors that streams both the home and away broadcast of each game. When a specific play requires further review, the DPS uses editing software to clip the play and all relevant replays. This video is then emailed to the entire Department within minutes for review. This might seem similar to something from the Mission Impossible series but it is imperative to keep the game as fair as possible, with getting as many eyes and opinions on the play.

When what the DPS calls Supplemental Discipline, occurs, it can be assessed even if an official did not call it on the ice. If an on-ice penalty was called, Supplemental Discipline does not have to match the call. It is also possible for more than one rule to have been broken. Injury is taken into account especially in Supplemental Discipline. From Article 18.2 in the Collective Bargaining Agreement between the NHL and the NHLPA, “In deciding on Supplementary Discipline for On-Ice Conduct, the following factors will be taken into account: (a) Whether the conduct is intentional or reckless, and involves the use of excessive and unnecessary force. (b) Injury to the opposing Player(s) involved in the incident. (c) The status of the offender and, specifically, whether the Player has a history of being subject to Supplementary Discipline for On-Ice Conduct in the past. Players who repeatedly violate League Playing Rules will be more severely punished for each new violation. (d) The situation of the game in which the incident occurred, for example: late in the game, lopsided score, prior events in the game, etc.” This is important to understand what factors are considered when assessing Supplementary Discipline and what is likely discussed within the hearings.

When it comes to Supplemental Discipline, the DPS holds hearings for the offending player to determine an adequate punishment. When first imagining what an NHL hearing is like, you might be quick to imagine a courtroom scene of the offending player begging for forgiveness to nameless people in suits, a battered hockey player sulking in a corner, possibly their lawyers objecting to the judge. But it is unfortunately not this dramatic.

A hearing consists of the offending player, the offending player’s team’s General Manager, members of the NHLPA, the offending player’s agent, as well as senior members of the DPS. The purpose of a hearing is to interview the player and his representatives about the play in question. No decision on Supplemental Discipline is made until the player is given the opportunity to explain his actions. If the DPS determines that any Supplemental Discipline from an infraction will result in five games or less or a fine of more than $5,000, the hearing is conducted by phone. If the infraction might require a suspension of 6 games or more, the offending player is offered the opportunity to an in-person hearing. In this case, the player remains suspended until the hearing takes place. If the player waives his right to an in-person hearing, the hearing will be conducted by phone. So taking this into account, we can assume that the majority of player hearings takes place by phone as it is rare for a player to receive a suspension higher than 2 games or a fine higher than $5,000 which seems to be the league standard.

However, it is not outrageous to see Repeat Offenders, as they are called, to receive very large fines and double-digit game suspensions. Most notably of which was a $1.2 million fine and a 20-game suspension given to Washington Capital Tom Wilson in 2018 for his illegal head-check to St. Louis Blues forward Oskar Sundqvist. The NHL cited Wilson’s “unprecedented frequency of suspensions in the history of the Department of Player Safety” for justification of the length of the 20-game suspension, which was tied for the eighth-longest ever in league history.

Players may be fined up to 50% of one day’s average salary without exceeding $10,000 for the first fine and $15,000 for any subsequent fines within a 12 month calendar period. When a player is fined, the money they forfeit goes into the NHL Players’ Emergency Assistance Fund. The fund assists players and their families with mental health, substance abuse, financial issues, and other matters most notably helping alumni of the NHL. So it can be safe to say that the money goes to a good cause.