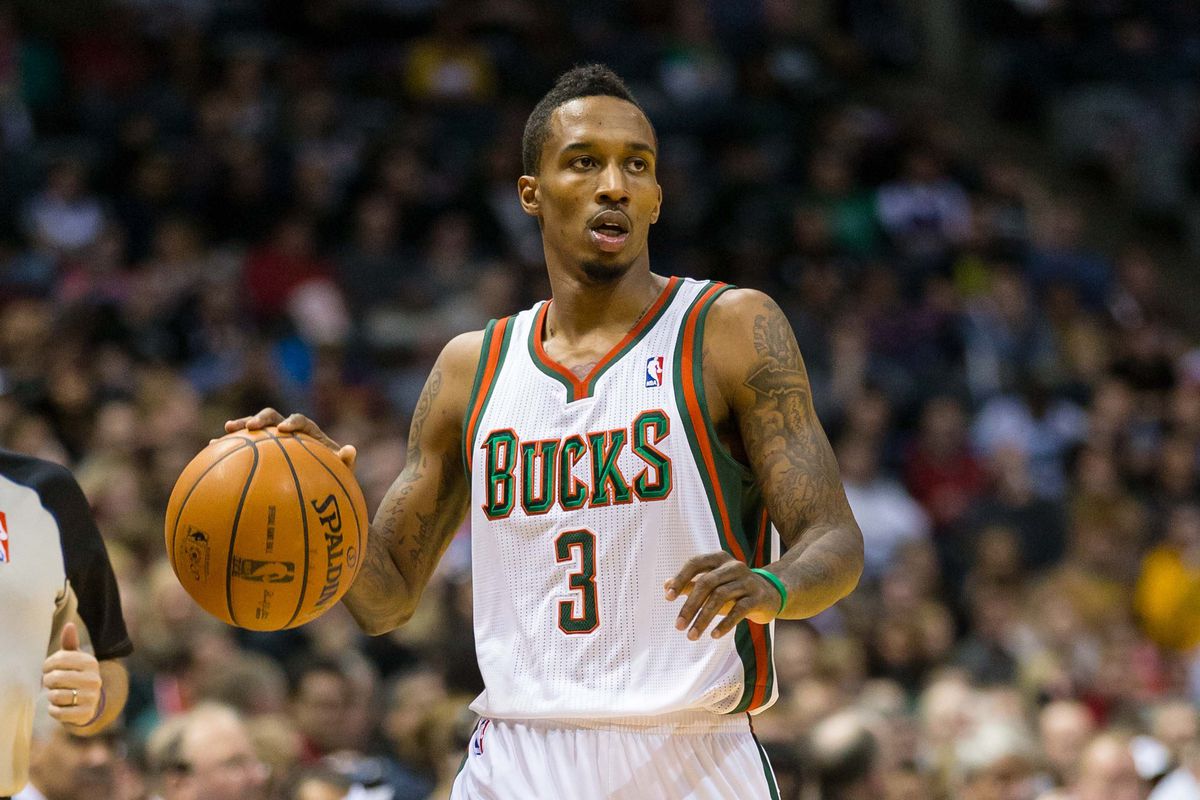 With Iverson’s floor presence, Shaq’s wit, LeBron’s confidence, Wade’s humility, Magic’s smile, and Nash’s game, Brandon Jennings has fans screaming “Fear The Deer!” Except for Cleve and Toronto, no team in the Eastern Conference had as big a drop in victories this year than the Milwaukee Bucks.  Back Sports Page had exclusive access to Brandon Jennings during the second half of this season, as the “Young Buck” tried to carry his team to another playoff berth.  BSP first caught up with Jennings during All Star Weekend. Who says you can’t go home again? Before becoming an NBA rising star, Brandon Jennings built his basketball foundation on the Gardena, California pavement.

After high school, Jennings decided to forgo playing at the University of Arizona, choosing Europe instead.When he entered his name in the NBA Draft a year later, Jennings was heralded as a basketball pioneer; no one had ever done this. No basketball player had ever endorsed Under Armour athetic gear, either; Jennings does.

Along with Under Armour, Brandon took part in a refurbishing project at his first school – Double Rock Baptist Church Learning Center. He also gave a major overhaul to the basketball court at Rowley Park, where he honed his hoop skills, early on. The new court features a brand new Sport Court rubber surface, complete with Brandon Jennings and Under Armour logos and premium NBA regulation hoops.

“It feels really great, to come back to the city where it all started,” Jennings smiles as we stand at mid-court. “I remember it like it was yesterday, when I was 5 years-old. I went into the office and J.K. (Rowley’s club manager) said, ‘As long as you don’t cry and you can get the ball up (to the rim), you can go out there and hoop with everybody.’ Thanks to J.K., for letting me go out there and play with the older cats.”

With his mom, Alice, brother, Terrence and several of his closest friends in attendance, Brandon was honored by Paul Tanaka, Mayor of Gardena, who presented him with Proclamations of Excellence and even deemed it, “Brandon Jennings Day.”

The event carried a neighborhood block party vibe more than a glamorous All-Star function. Jenning’s personal chef, E-Dubble, fired up the grills, local barbers offered free haircuts, and children were treated to a little soft-serve ice cream.  After squaring off 1-on-1 against some of the neighborhood kids, Jennings played a game of H-O-R-S-E woth former NBA point guard and New York City legend, Kenny Anderson. The two formed a friendship when Anderson heard thatt Jennings enjoyed watching old game footage on YouTube of the original speedy lefty point. The 21-year old reminded Anderson that his legs are 19 years fresher, with a mix of trick-shot layups and jumpers.

When asked about his favorite memory, Jennings stared blankly up to the sky. “My favorite memory was the summer camps we used to have here.  With the court now outside, Gardena will be able to really bring it back next summer for the kids.”

As we boarded a flight to get back to the second half of the season, Jennings was positive that the Bucks would make a playoff run. “We have had a lot of injuries, including myself, but I think we are learning to play with each other better. It’s tough cause we still have not had the opportunity to practice or play with a full squad yet, but we will make the playoffs.”

As the season was winding down, Jennings told the Milwaukee media, “Some guys have the mind-set of winning on the team and some guys just don’t. We traded a lot of pieces that I feel we should have kept. But that’s part of the business and you’ve got to roll with it.” When asked if he wanted out of Milwaukee, Jennings was adamant. “I don’t.  It was just my frustration talking.  I know I play a big part of the success of this team, and I’ll work on things this off-season.”

Jennings has no plans of living in Milwaukee year round. “The weather is too cold there.” But he’s not opposed to growing roots in Milwaukee, either.  “I can see myself playing my whole career in Milwaukee. They have great fans, who are excited about what we are doing. I love playing for Coach (Skiles). The whole ‘Fear The Deer’ movement is catching on. I am very happy being a Milwaukee Buck.”

Don’t let the baby face and calm, cool voice fool you; Brandon Jennings is in hot water, thanks to what he calls “emotional talk.” Jennings got national attention last year for his Twitter posts. The mild mannered kid excites, entertains, and even enlightens with his frequent, often humorous posts. He has even exchanged “tweets” with rapper Young Buck over the use of his name.  Before Jennings ever even put on a Bucks jersey, he made headlines when a telephone conversation with a rapper was videotaped and posted on YouTube. In the video, Jennings insisted that Ramon Sessions would not return, boasting that he will beat out Luke Ridnour as a starter.  He also made a profane comment about the New York Knicks for not drafting him. In a different interview, he said Ricky Rubio “was all hype.”  Since then, Jennings claims to have “learned a lot from that situation, and how powerful words can be used against you; I’m a confident person, but my confidence got the best of me. I learned to be careful with what I say.”

Jennings is hopeful as he looks to the future. “I am a Milwaukee Buck. I am just not happy losing. I look forward to a great year next year, and building on what I have learned these past two years. I have a foundation that is just getting off the ground, and partnerships that I have formed in Milwaukee and back in California.”