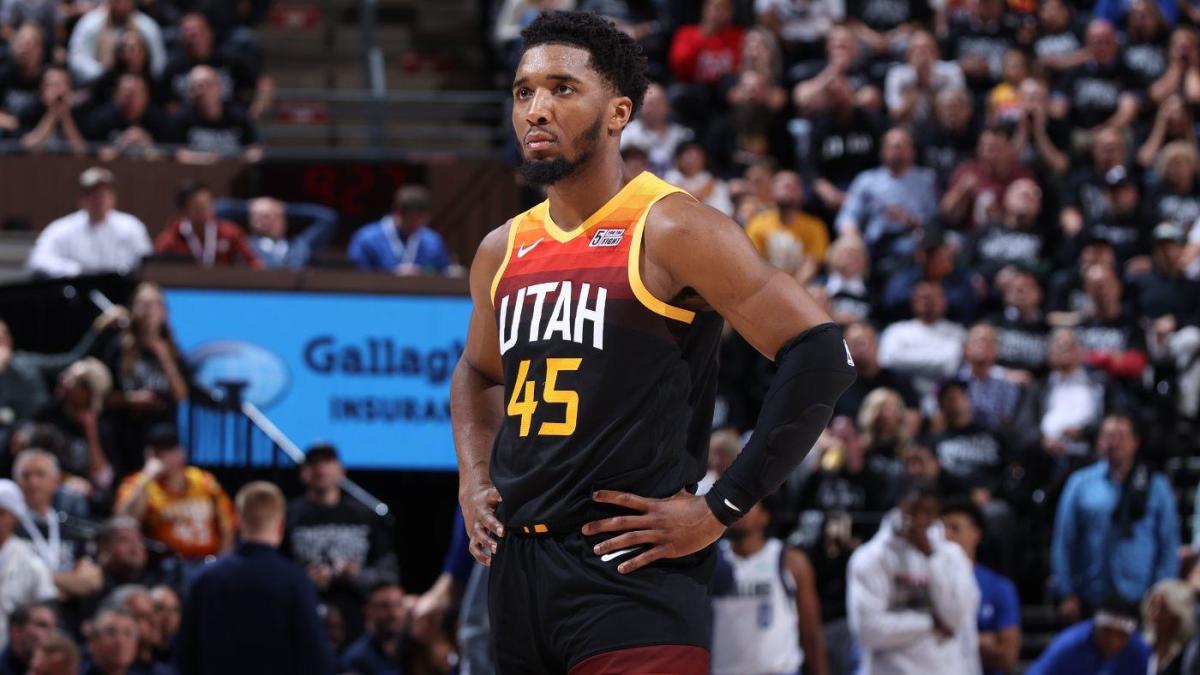 Donovan Mitchell has arrived in Cleveland, and the new era of the Cavaliers has begun. The rebuild after LeBron James left for the second time is now pretty much complete, and these Cavs are ready to compete. The Cavaliers will certainly be in contention, but still young enough to be good for a long, long time, which is an exciting thought. That was the energy surrounding Mitchell and the whole building for his introductory press conference, which went off with aplomb.

Mitchell strode into his press conference with an easy swagger, followed by throngs of media and affiliated personnel from the moment he stepped into the building to when he sat down and introductions began. That’s an experience he’s had since touching down in Cleveland, and that level of support has really impressed him. He mentioned many times the overwhelming fanfare and love he’s been shown since the trade went down, drawing particular attention to the reception he got when he first arrived. Mitchell was informed that a few fans would come to see him, only to be met with hundreds of fans at the airport. The fan’s reception has been fantastic so far, and the welcome to Cleveland has been warm to say the least. Luckily, the feelings seem mutual. 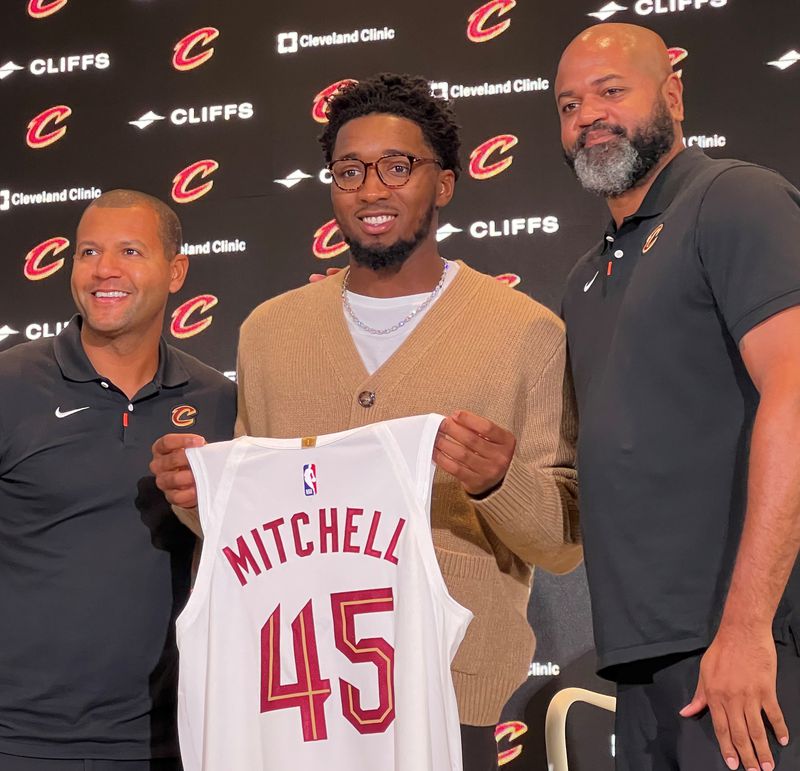 One underlying question with Mitchell was would he really be happy in Cleveland, especially when his hometown New York Knicks were the assumed destination for him for multiple years now. Mitchell is under contract for three more years regardless of his feelings, and he could hardly say poor things about Cleveland considering all that, but he didn’t seem reluctant at all to be in The Land. He quipped about liking cold weather better, especially for fashion reasons, and seemed excited to visit Cleveland’s other professional sports teams in the Guardians and Browns, something that he didn’t have in Utah. In fact, he’s already forming friendships with the likes of fellow Cleveland stars Amed Rosario, Tristan McKenzie, Denzel Ward and more, and he entered into the arena wearing a Brownie the Elf hat. While Mitchell himself assumed he was in for a homecoming with the Knicks, mentioning it would be nice to live near his mother which he hasn’t done since he was in eighth grade, there didn’t seem to be any sense of regret or longing to be in New York. Even the part about living with his mother (who was in attendance) was made with a lighthearted tone.

In terms of future teammates, Mitchell said over and over how shocked he was that the Cavaliers managed to keep all that they did.  Considering they’ll be able to trot out three All-Stars and the young phenom in Evan Mobley at the same time, that’s not surprising.  Interestingly, Mitchell also mentioned Caris LeVert with the usual suspects (Darius Garland, Jarrett Allen and Mobley) multiple times. That could be because LeVert was in attendance (as was Garland) or perhaps it was a sign that LeVert will end up being the fifth starter, or simply that LeVert will factor into the Cavalier’s plans heavily this season. LeVert has been a somewhat popular trade name, considering Cleveland has a major hole at small forward currently, but perhaps LeVert is here to stay, at least for this season. Mitchell seemed most excited to be alongside Garland, who he said is constantly pushing him in practices and workouts, with Garland being just as good a shooter. That’s high praise coming from one of the deadliest scorers in the league.

Mitchell is also making the transition from young gun to veteran leader, all of a sudden becoming one of the older members on the team. On that note, he did say that he has been leading since he got to Utah, so it wasn’t going to be that much of a transition. He also mentioned Ricky Rubio, who was a former teammate on the Jazz, as someone who mentored him and he was excited both to reunite with Rubio and to pass on what Rubio taught him as well.

While the day was mostly about Mitchell, head coach J.B. Bickerstaff and President of Basketball Operations Koby Altman were also on hand to give some insight on the new roster. Altman said that Mitchell’s playoff experience (he’s never not made the playoffs in his career) was a key factor, as was Mitchell’s makeup as a person. He did want to emphasize however, that due to the youth of the team and the timeline they have set, they aren’t too worried about this year, saying it wasn’t “contention or bust” for them in the upcoming season. That could be construed as an attempt to lower expectations, but it’s also hard to argue that as the case considering Mitchell, who just recently turned 26, is the oldest member of the core. As for Bickerstaff, he said he didn’t think that Mitchell will change the way they fundamentally play, and that they will be able to use different combinations at all times to throw defenses off balance and force them to choose their poison. 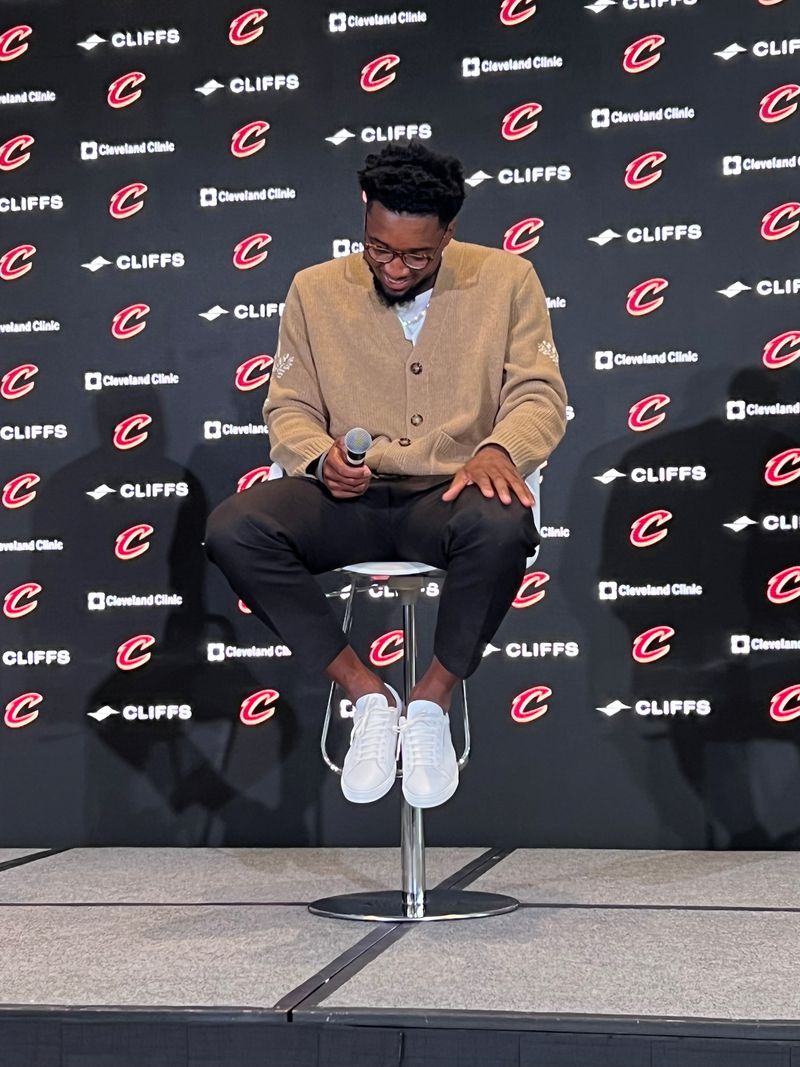 Overall, it was as good as an introductory press conference (an event designed to make the subject look good and drum up support) could be. Mitchell came off intelligent, easy-going and most importantly excited to be there, which was probably on the PR bingo board when they planned the event. While not too much new information was gleaned, Mitchell’s apparent love for the city (Lebron made him a Cavs fan growing up) was already on display, and Cavs fans have every reason to be ecstatic about their new signing. Of course, things can change in three years, and expectations have certainly risen, but the Donovan Mitchell-era Cavaliers have officially started and started on a high-note.

4 Key Matchups for the Houston Rockets This Season
Before Training Camp and Preseason Questions: Phoenix Suns