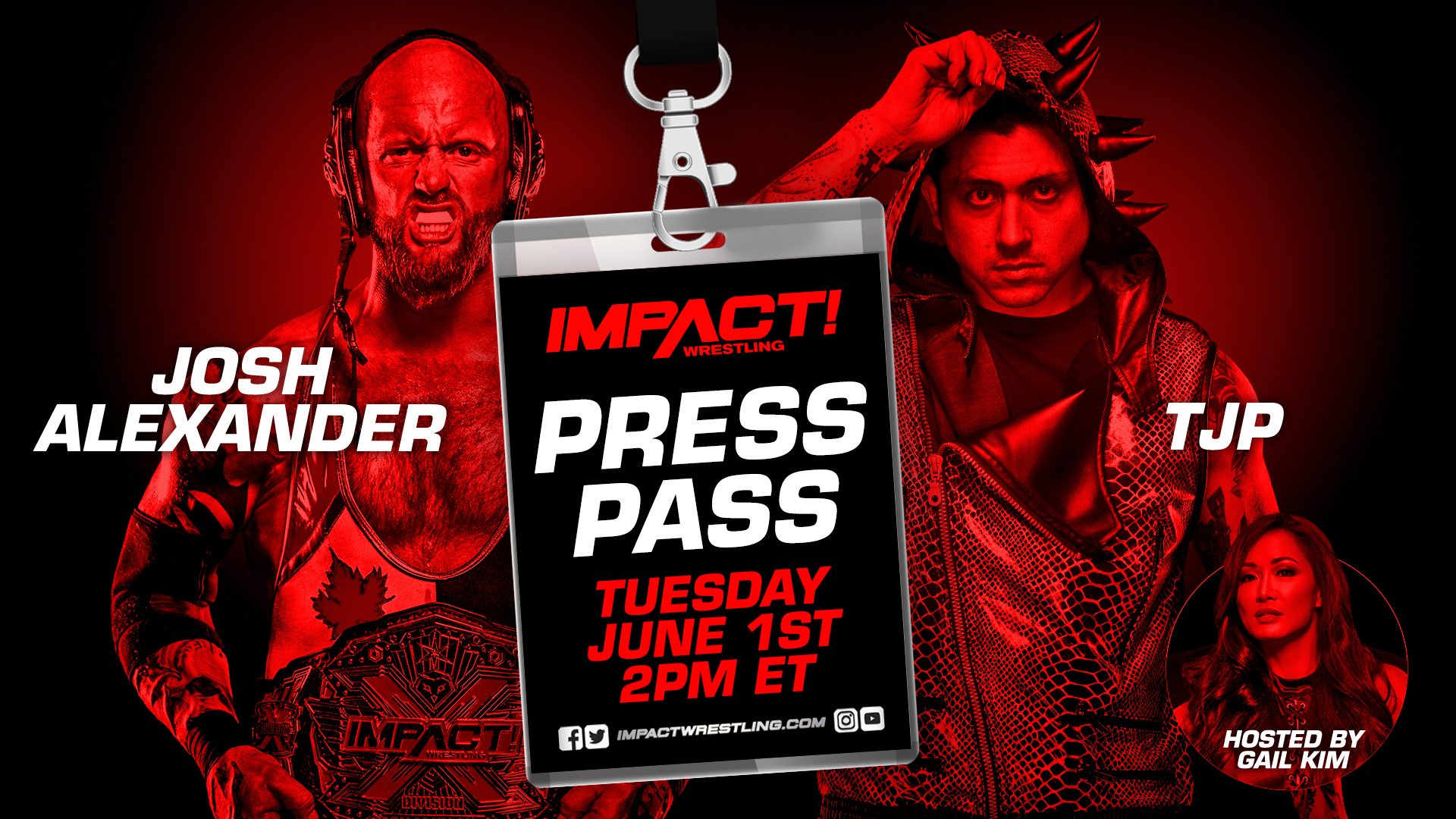 On June 3, Josh Alexander and TJP will make history. For the first time ever, the X-Division Title will be defended in an Iron Man match. The champion, Josh Alexander, will look to retain in a 60 minute war against TJP. The contest will start on Before The Impact (BTI) on AXS TV before carrying over onto the regularly scheduled show IMPACT!, also on AXS TV.

The current champion, Josh Alexander, won the belt at IMPACT Wrestling’s Rebellion pay-per-view on April 25 this year. There, he pinned then champion Ace Austin in a Three Way match to become the new title holder for his first time. TJP also fought in the match but was not involved in the finish. Notably, a couple weeks earlier, Alexander defeated TJP in a single’s match.

Ahead of the match, both men were special guests on IMPACT Wrestling Press Pass. Gail Kim, a wrestling legend, hosted the event and streamed on Facebook. This gave press members the chance to ask questions to the wrestlers before the history making event a few days away.

TJP on the Iron Man Match

TJP was asked if he was undertaking any specific preparation for the upcoming match. The challenger responded, “I always grew up a Shawn [Michaels] and Bret [Hart] guy. The ‘white elephant’ in any Iron Man room is Bret and Shawn, the original.” Coincidentally or due to a cosmic link according to TJP, he was in the crowd for that match, in the fourteenth row of Arrowhead Pond to be exact, when he was just 11 years old.

When the question came up about how this upcoming Iron Man match would be memorable or different, TJP would be a fan of history repeating itself. “I guess repeating history if one brash and arrogant little fellow beats the Canadian in this one as well, that would be an interesting footnote,” he remarked with a smile. If TJP can overcome Alexander, this would be his third time holding the X-Division Title. His first title reign, as Manik, was in 2013. He would have to wait over seven years to hold the title high once again. After defeating Rohit Raju at Final Resolution in December 2020, Manik would once again hold the gold.

Fighting to retain the belt is the Walking Weapon, Josh Alexander. While he has enjoyed holding the belt for a little more than a month, the champion does not want to relinquish his hold any time soon. For one thing, to Alexander, the X-Division Title is a beacon, signaling top tier professional wrestling. To him, it was “the number one thing in all of my fandom.” X-Division matches, “introduced me to all these legends, it was a guarantee that you were going to get the match of the night no matter what.”

Now that the roles have been reversed and Alexander is in X-Division Title matches, he knows the responsibility of his position. “…I try to have the best match every single time. I try to leave a lasting impression like the one that was made on me,” the current champion said. But it is a responsibility he is willing to take on. “The second I heard about this match, I literally smiled…I thought of the opportunity that’s being given to me…it’s going to be something special. It’s a platform only a handful of guys are going to get.”

Alexander on Being the Champion

Above all, the X-Division Title “is the number one thing I’ve done in my career,” said Alexander. “There’s a video my wife filmed of my children watching live and losing their minds. To see my kids lose their minds and see their dad win the championship, I’m going to hold onto that for the rest of my life.”

Despite the high bar already set by Alexander for the quality of his X-Division matches, he puts this upcoming Iron Man match even higher. “I would like nothing less than one of the best matches in impact history,” he said. This competitive nature drives him to put on the best performances every time he steps into the ring. “I’ve been homeless myself; I’ve been injured and retired. I’m never going to let anyone take it away from me again.”

Both men answered what worries them most about their opponent’s offensive capabilities. TJP’s mind instantly went to his ankles and how Alexander’s submissions could impact his gameplan. “I’d like not to be crippled. One wonders for 60 minutes, if he breaks my ankle in the first 20, what am I going to do? Whatever gives out first, I’ll shift all my focus after that.”

As their 60 minute match is less than 48 hours away, TJP remarked how he feels the pair have a special connection. “In a way, we are sort of kindred spirits. It’s rare that you get guys that are cut from the same cloth and become linked for a while…perhaps Josh is that guy for me…it’s like Sherlock Holmes and Moriarty.”

Altogether, the two men know each other well and are looking forward to the match. Their title bout, regardless of outcome, will make history. The Iron Man match starts on BTI and will finish on the regularly scheduled programming. IMPACT starts at 8:00 pm (EDT) on Thursday, June 3. You can watch the action on AXS TV as well as on Twitch at twitch.tv/impactwrestling.