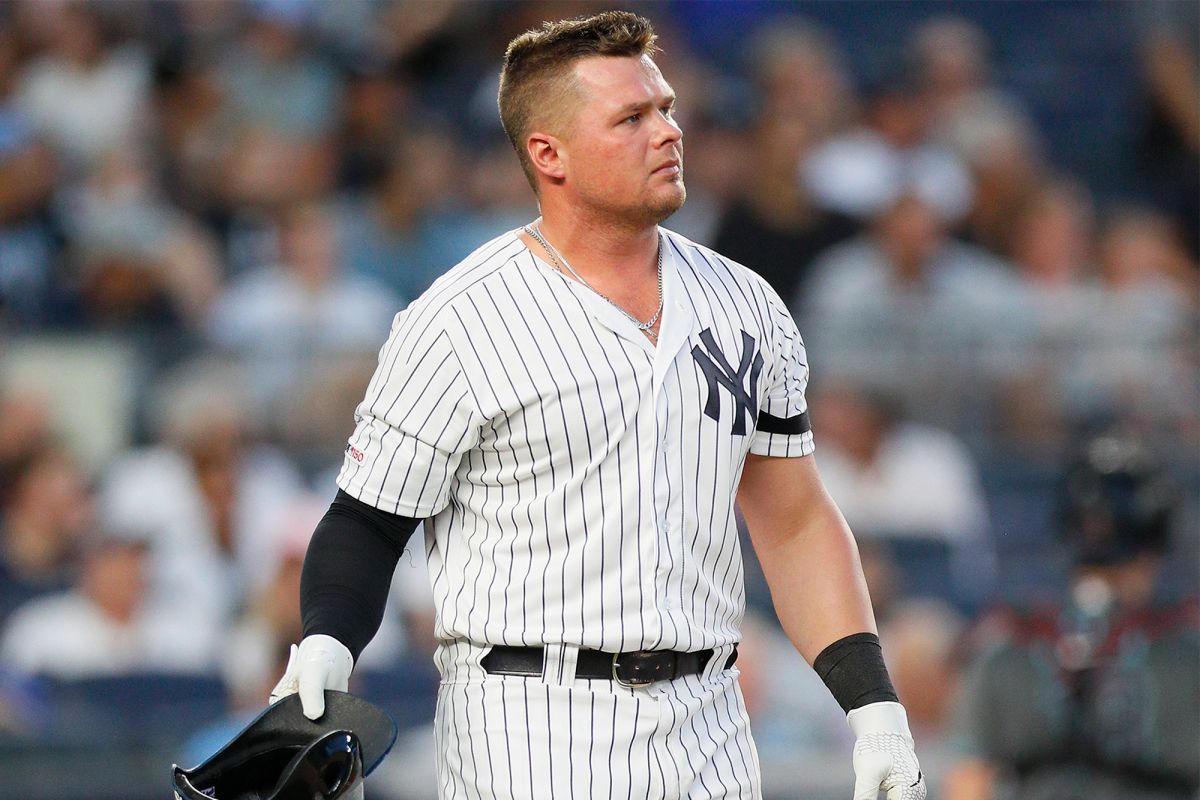 When Luke Voit, the Yankees first base slugger hits yet another moonshot, Yankees fans wait to hear longtime announcer John Sterling cry: “Luke Voit hits one to Detroit!” Voit was the answer to the glaring first base problem the Yankees had from 2013-2018. Although they have experienced few offensive weaknesses over the years, the Yankees had a black hole at first base. Players such as Lyle Overbay, Travis Hafner, Chris Carter, Neil Walker, Greg Bird, and even the aging Mark Teixeira continuously struggled. Fortunately for the Yankees, Luke Voit has taken New York by storm… yet the Yankees should consider putting him on the trading block at some point during the 2020 season.

However, an abdomen injury in the second half saw his value plummet as Voit hit .228/.348/.368 with 4 HRs, 95 wRC+, and a 32.3 K%. To make matters worse, after playing poorly in July, Voit missed all of August, and despite returning in September, he was eventually booted from the Yankees ALCS roster. Voit’s second half downfall lowered his ranking to the sixteenth best first baseman in baseball (according to Fantrax). Nonetheless, according to the New York Post, Voit entered Spring Training stating, “I have never felt any better in my life. It’s everything. I feel faster, more agile and my strength is back.” Voit’s confidence and potential as a premier first baseman will make him the Yankees starting first baseman once again in 2020. That being said, this season will be an important year for Voit, and depending on his performance there is a chance he could be traded.

Hear me out; there are two names that can make Luke Voit expendable: third baseman Miguel Andújar, and first baseman Mike Ford. Some Yankee fans might forget just how good Andújar was with the bat in 2018. He hit for power (27 HRs, 92 RBIs, .527 SLG, .845 OPS), average (.297), and contact (4.1 BB%, 16.0 K%). Despite Andújar’s defensive shortcomings (-16.0 UZR, -25 DRS), he still compiled a 2.8 fWAR. Additionally, he placed second in Rookie of the Year voting in 2018 only because of two-way phenom Shohei Otani, who hit 22 HRs and also had a ridiculous 10.97 K/9 in 50.1 IP. Unfortunately for Andújar, he missed the entire 2019 season because of a right shoulder strain and a right labrum tear. While Andújar was injured, breakout star Gio Urshela filled in at third base very nicely. As a result, Urshela will most likely begin the 2020 season at third base. Consequently, since Urshela took over at third base, Andújar does not have a true position on the field. The Yankees understand this as well and will try out Andújar at left field as well as at first base. Since Andújar’s bat should keep him in the lineup as much as possible, if he can find his home at first base, Voit could become expendable.

Then there is Mike Ford, who in just a fifty game span showed promise that he could replicate Voit’s success as a hitter. Ford slugged 12 HRs and slashed .259/.350/.559 with a 134 wRC+. Additionally, Ford has a high walk rate (10.4 BB%) and does not strike out too much (17.2 K%), which is the perfect combo for a slugger. Furthermore, his .243 BABIP shows that Ford can be even better in 2020, and while he is by no means an above average defender (-1 DRS, -1.5 UZR), he still might have a leg up on Voit in that department. Also, Ford slugged 35 HRs in total in 2019 as he socked 23 HRs in just 79 games in Triple-A. As harsh as it may sound, the Yankees don’t necessarily need Voit; Ford’s powerful lefty bat and Andújar’s more defined role on the Yankees would not only solve several problems, but could also prove a lethal combo.

Ford’s lefty bat could also be the answer to the Yankees right-handed heavy lineup. While the Yankees don’t necessarily need another left-handed hitter, since all of their power right-handed hitters use the short right field porch to their advantage, they have shown interest in these types of sluggers. One name that specifically comes to mind is Kyle Schwarber. The Yankees were well into trade talks with the Cubs about their young slugger during this offseason, and previous offseasons too. However, the fact that the Yankees were still going after Schwarber, without essentially having a spot for him, is puzzling to say the least. If the Yankees are still interested in finding a potent lefty bat, they do not need to look any further than their own homegrown talent in Mike Ford, especially if they try to trade Voit.

Although trading Voit may seem hard to imagine, picture this; the trade deadline is approaching, the Yankees are coasting with the AL East title, and as always injuries and inconsistencies happen. The 2020 Yankees team are the MLB favorites for the World Series, and after netting Gerrit Cole, most Yankee fans agree that anything short of a World Series title will be a disappointing year. Despite the acquisition of Gerrit Cole, their pitching rotation still has a lot of question marks: Paxton will not be in their rotation until May or June, Gerrit Cole will be adjusting to life in pinstripes, Luis Severino is coming off an injury-riddled 2019, Tanaka has been up-and-down in the regular season the last few years, J.A. Happ was awful until August last season, and Montgomery has hardly appeared at the Major League level since 2017. Suffice to say, the Yankees may want a spot starter or long reliever. Additionally, after Chapman, Britton, and Kahnle, the Yankees relief corps is a bit of a question mark. While Ottavino and Green had mostly successful 2019 seasons, Ottavino’s high walk rate (5.43 BB/9) and large difference between his ERA and FIP (1.90 ERA, 3.44 FIP) in 2019 indicate a strong possibility of regression in 2020. As for Chad Green, the Yankees could see him pitch similarly to how he performed in the first half of the 2019 season (5.68 ERA, .316/.359/.529, .372 wOBA), or in the second half of 2019 (2.89 ERA, .170/.260/.321, .252 wOBA). While he is likely to return to his second half form, the Yankees will just have to wait and see which Chad Green will appear.  The rest of the relief corps will be rounded out among the likes of Jonathan Holder, Ben Heller, Luis Cessa, Jonathan Loaisiga, or another reliever. Although all have had varying levels of success at the Major League level, none of them are elite options coming into 2020. Pitching wise, the Yankees could always use more protection; thus, Voit can potentially be used as trade bait as they try to win their 28th Championship this season.

Despite all these reasons to trade Voit, the Yankees should still give him the chance to produce for them in 2020. Voit can be a top-10 first baseman, and is a dynamic player who says he is in the best shape of his life. At the start of the season, the Yankees should keep Voit, Andújar, and Ford (assuming he wins the bench spot on the 26-man roster). By the trade deadline, the Yankees will have a pretty good grasp of how well each of these three players are doing. In a perfect world, Ford, Voit, and Andújar will all hit well in 2020, and stay on the 26-man roster. Although this would be a good problem, there would be drama nonetheless. In a more realistic world, one of these three players may be relegated to the bench, sent down to the minors, or even traded. Regardless of how Luke Voit performs this season, he may still end up the odd man out. If Andújar and Ford are producing, and are seemingly ready to platoon at first base before the deadline, the Yankees would be foolish not to talk to other teams about trading Voit away. At any rate, Yankee fans will just have to wait and see how the first base competition will play out.

fWAR: Wins Above Replacement from Fangraphs. For example, If a player has 0.1 fWAR they are worth 0.1 wins more than a replacement-level player (0.0 fWAR)

BABIP: Batted Balls in Play. This stat shows a player’s batting average when the ball is put into play.  MLB average: .300 BABIP