Jalen Hurts is the Eagles New Franchise QB. What Now? 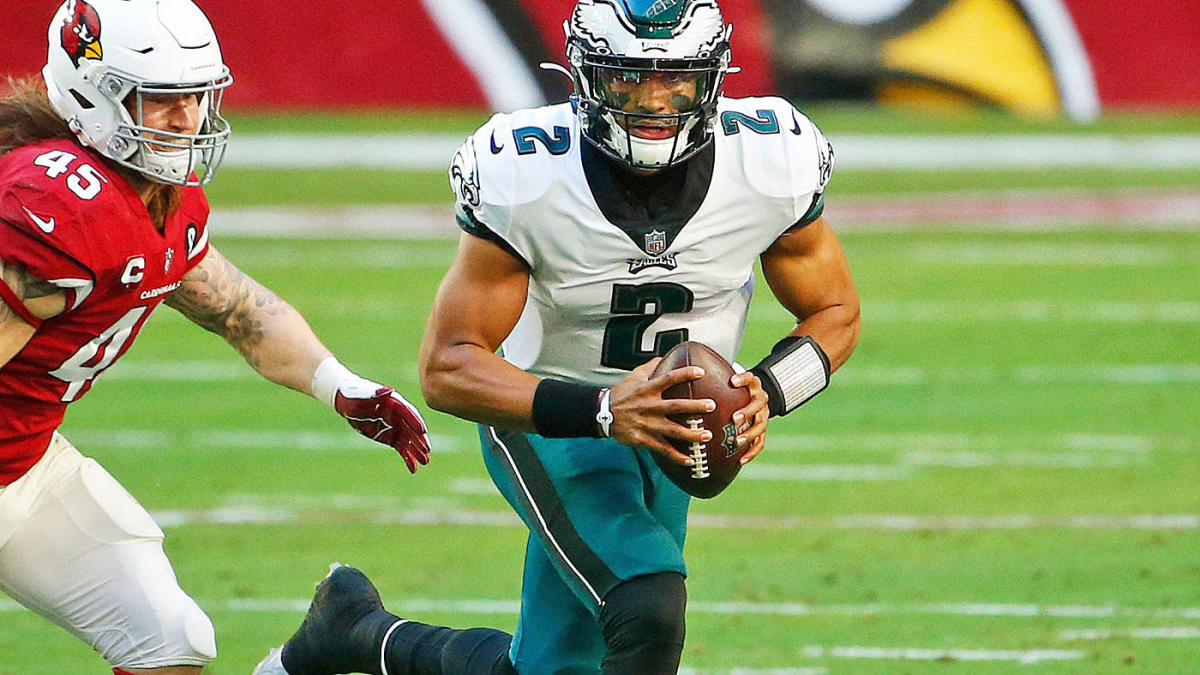 Jalen Hurts has breathed new life into the Eagles in his first two games. By now you’ve heard the records and accomplishments he’s already had, and Hurts is the QB until he proves otherwise. So the question shifts, from “who is the QB” to “what do we do now”.

One thing is for certain, the Eagles cannot keep both Wentz and Hurts. The locker room situation would be untenable, and both QB’s would be looking over their backs after every bad throw. It’s not a situation you want to be in. Besides, Hurts has the starter job barring an absolutely catastrophic end to the season. Like Wentz 2020 bad. See how hard it will be for Hurts to lose the job?

Make no mistake, Hurts has earned his spot. His game against Arizona was easily the best the Eagles have looked all year. He’s been exciting, he’s been dynamic and he’s been clutch. Like 2017 Wentz good. What could have been… Anyways, I didn’t have to wince in fear every time the ball left Hurt’s hand. Already that’s a massive improvement.

While the Saints game was a great win, there were concerns Hurt’s would have trouble throwing the ball. He put all those doubts to bed with an incredible performance the week after. Throws on the run, throws stepping into the pocket, chunk plays over the middle of the field, deep balls down the sidelines, he showed you he can do it all through the air. To top it off, Hurts is a threat with his legs, which the modern QB is proving is a must. Hurts has the look of a franchise QB. So far.

There’s some things you can pick at. Hurts took a safety, and threw two balls that he was lucky weren’t picked, and not just intercepted but ran back for touchdowns. To be fair though, you can nitpick that with any QB, any game. And sure the Cardinals are a bottom half defense, but hey it’s not like Wentz didn’t play bad defenses. Cowboys, Bengals and Seahawks to name a few. Wentz in those games combined don’t hold a candle to what Hurts did against Arizona.

Something more compelling has been the defense, specifically the turnovers. They’ve been generating turnovers at a much higher rate than they have been all season. The defense averaged .84 with Wentz. With Hurts it’s been 2.5. The Eagles were 3-8-1 with Wentz, but they were 3-0 when they got two or more turnovers in that span. They are 1-1 with Hurts. Note, this is probably the only stat that favors Wentz. At all. You can say something abstract about Hurts motivating guys, or the defense “wants to play” for Hurts, but I simply don’t think there is a way to be sure of that.

You probably don’t need a refresher on how terrible Wentz has been, so no need to rehash that. The problem is what to do with Wentz contract. The raw numbers are terrifying. 4 years 128 million sounds like death. Luckily, the actual numbers aren’t quite so bad. Thanks to spotrac and a handy reddit post by user u/pokerfink, we know that whether the Eagles trade or cut Wentz (as long as it’s before March 19, 2021), his contract is off the books by 2022. Maybe that’s too optimistic, but there was no way the Eagles were competing in 2021 anyways. A couple years of high draft picks and the Eagles will be ready to spend and compete by Hurt’s 3rd year, with two more years of his rookie deal.

A trade saves the Eagles 16 million in 2021, and a trade isn’t out the picture. Because signing bonuses are already paid by the Eagles, a new team is only paying his salary, which is 25 million in 2021 and 21 million in 2022. Which sounds like a lot, but some mediocre to terrible QB’s are being paid around that much. Jacoby Brisset is getting 21 million to throw the occasional Hail Mary. Big Ben is making 23 million to lose to the Bengals backup QB and be the 23rd QB in passer rating. Jimmy Garoppolo is making 26 million and we have no idea what he is. Point is, there are worse deals for teams than to bet on a guy that was MVP caliber at one point in his young career.

The thing with new QBs is they often look pretty darn good early on. Blake Bortles, Gardner Minshew, Robert Griffin III and dozens of other QB’s had hot starts to their career before fading into mediocrity or worse. Geno Smith had a perfect game. But at the end of the day, as much as we yell at our TV’s about the opposing WR’s being wide open or running backs running free, defensive coordinators in the NFL are really, really smart. They adapt, they figure things out. Remember the wild cat? How about the read option fad in the NFL? Or maybe the RPO that was the new hotness? Where are they now? Put simply, anyone can string a few good games together. Matt Flynn in 2011 anyone? It’s when teams have had time to prepare for you, and tape to watch, that’s what separates the best from the rest.

Hurts hasn’t had that yet. He won’t really until next season. What does he look like when he does? Lamar Jackson went from leading the league in passing touchdowns to 18th this year. Baker Mayfield had a 27:14 TD-INT ratio year one. In year two it was 22:21. A regression is nigh inevitable for Hurt’s. The only question is how bad.

To be clear, keeping Wentz is not really an option. Even though I believe Wentz can be saved, it’s not with the Eagles. Sometimes, even if you are a great player (I still love Wentz, forever and always) you need a change of scenery. See Andy Reid. The sad reality is that the Eagles need to be done with him to save any chance of competing in the somewhat near future.

Even if Hurts blows it, the rebuild can start fresh. If they keep Wentz, even if Hurts plays bad we will get this awkward back and forth of no one playing well and constantly getting yanked. I’ve seen this story before, it’s called the 2019 Jaguars with Nick Foles and Gardner Minshew. They now possess the worst record in 2020.