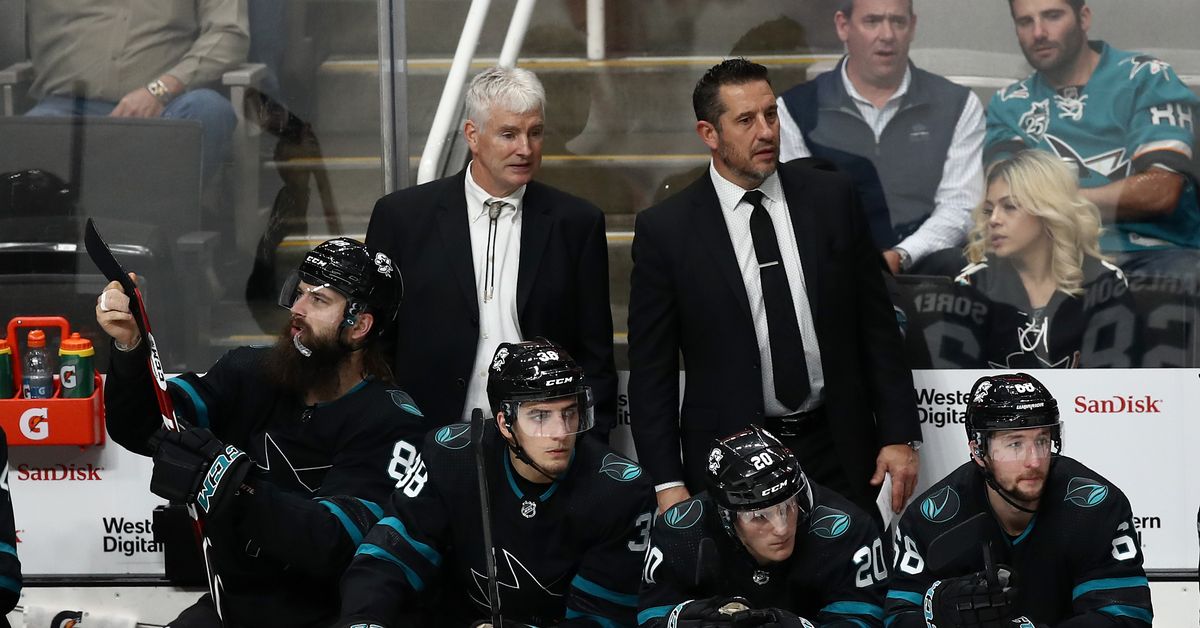 As the San Jose Sharks breaks the ice on Thursday for the opener to the 2021 season, team teal looks to have a very unpredictable, interesting outcome, as if this hockey season is not already random enough. The fact that they will only be playing 56 games and have three new division opponents whom they will face eight times, on top of the fact that there are so many questions surrounding the team and their future make for an unfathomable 2021 campaign.

The Sharks will play a shortened schedule and be playing in Arizona, not the Shark tank due to COVID 19 restrictions in the Bay Area. With the absence of home ice advantage due to no fans in the crowd the Sharks have the chance to prove that last season’s struggles were a fluke. But the team is a mix of aging veterans and inexperience. Thus, the season could end up being an exceptional success or a repeat of last season’s utter disaster.
Top Questions For The Sharks In

Top Questions For The Sharks In 2021

Will Their Defense Better?

The defense was not bad on all fronts during a rough 2019-2020 campaign. They did finish atop the league with a penalty kill percentage of 85.71%. However they surrendered 187 goals against when it came to 5-on-5 play, the second most in the league. Last Season, the Sharks were in the absence of their top defender Erik Karlsson towards the end, but he is yet to produce for the Sharks like he did in his eight seasons with the Ottawa Senators. The Sharks have him locked up for eight years at $11,500,000 a year. His specialty is that of a scoring

Another top scoring defenseman in Brent Burns is set to lead the Sharks defense on the second line, paired with Marc-Edouard Vlasic. Vlasic however, made costly turnover after costly turnover in the defensive zone, not like the Vlasic the Sharks have come to know and love in past seasons. These veteran defensemen will have their work cut out for them as the Sharks are yet to know the full potential of the rest of their young defensive core that includes Mario Ferraro, Radim Simek, Nicolas Meloche, Jacob Middleton, and Nikolai Knyzhov. Middleton brings the potential of a hard-hitting defender while Simek who is the most experienced of the bunch remains unclear in his status this first week of the season. But a defensive improvement is a must if the Sharks want to be competitive.

Could We See A Repeat Of the Storied 2015 Season?

Is the door closing for this Sharks team? Going into the 2015-2016 season, the Sharks were coming off their worst season since 2002, and it was looking like the veterans on the team were aging out and the team was headed for a rebuild. Then, they made a major breakthrough midway through the season leading to a run at their first and only Stanley Cup Finals appearance in franchise history. Sound familiar this season? It had turned out in 2016 that the Sharks just had a few missing pieces, tweaks, and a head coaching change necessary to compete again.

While the Sharks did not make any major roster acquisitions this offseason and are stacked with inexperience in in their backlines, head coach Bob Boughner remains confident in the team’s ability to compete saying, “Experience speaks for itself and we have a lot of that through our lineup, but we need a bit of restart and refresh.” said Boughner according to NHL.Com. “We’re big believers in developing and giving the young guys a shot if they’ve earned it and we have a few young guys in camp that have earned it.”

Is head coach Bob Boughner The Right Guy For The Job?

Boughner took over midway through the 2019 season after the Sharks fired Peter DeBoer, only to inherit in a messy situation. He finished the season with a record 14-20-3, but according to CBS Sports general manager Doug Wilson is confident in Boughner. “We saw a marked improvement in our play in several key areas during the second half of the season, before losing some key players to injury,” said Wilson. While the Sharks certainly had injury troubles last season there was substantially more reason to why they struggled. It remains to be seen if the Sharks made the right choice in September by hiring Boughner as their full time head coach. So far, Boughner has been an NHL coach for two full seasons; 2017 and 2018 with the Florida Panthers, where he failed to make the playoffs. Prior to coaching the Panthers however, he was an assistant coach with the Sharks for a couple of seasons, so he is familiar with some of the players and team culture.

Happenings In The Offseason

After 14 seasons in teal, on October 18 the 41-year-old Joe Thornton signed a one year $700,000 contract with the Toronto Maple Leafs, who look to be major Stanley Cup competitors this season. It will be one of the hardest goodbyes for Sharks fans in franchise history. ‘Jumbo Joe’ ranked 7th in all-time regular season assists and was the core of the Sharks many playoff teams these past two decades. Unfortunately, he has yet to win a title in his Hall of Fame career.

Another longtime Shark yet to win a title returned to the team this offseason. 14-year veteran forward Patrick Marleau re-signed with the team after he spent the 2017-2018 seasons with the Maple Leafs before the Sharks reacquired then traded him to the Pittsburgh Penguins last season. The fans of the Sharks could not be happier to have the most explosive player in their franchise history back to provide veteran leadership. He is the all-time franchise leader in points (1,102), goals (518), games played (1,551), power play goals (161), and game-winning goals (101). While he may not be as explosive of a scorer at this point in his career, it is certainly reassuring to fans that they still have a franchise icon playing for them and offering veteran leadership.

A Changing Of One Guard

One of the many areas of difficulty for the Sharks last season was goaltending.  Last season the Sharks continued to experiment with the netminder combination of Martin Jones and Aaron Dell, two who failed to finish even in the top-40 among netminders. The Sharks have decided to keep Jones on the team, while acquiring Devan Dubynk in the offseason from the Minnesota Wild. Like Jones, Dubynk had an abysmal 2019-2020 season where he finished near the bottom among goaltenders in most categories.

However, in prior seasons he has been one of the best goaltenders in the league, including a fourth place finish in the 2014 season for the Hart Memorial Trophy. If Dubynk and Martin can even show the slightest of improvements that would help the team dramatically as the two have both had steller years where they finished above average in goals allowed percentage. All the Sharks can really hope for at this point is for an upgrade to the previous two seasons in the net.

On Tuesday, it was reported that Sharks forward Evander Kane filed for Chapter 7 bankruptcy, despite signing a seven-year $49 contract with the team according to the Athletic. The filing included about $10 million in real estate and liabilities of almost $27 million. While the team has shown no concern about the distraction and the possibility of Kane not even playing this season, more and more questions arise about Kane being a model team player. He led the Sharks with 122 penalty minutes last season and has even hinted at channeling his physical aggression into the boxing ring. On November 29, he tweeted that he was ready to fight Youtube sensation Jake Paul in a celebrity boxing match. Are these character issues the team  Are these character issues the team should be concerned about? Will it hurt his long term contract team even more? That part remains to be seen.

The Sharks are in a newly aligned West Division that has a mix of old and new foes, top-tier and lackluster teams. While it is hard to see the Sharks finishing atop the powerhouse teams in the West that include the likes of the Colorado Avalanche, Vegas Golden Knights, and St Louis Blues, all the Sharks really need to do to make the playoffs is finish better than half of the eight teams in the division. This year’s playoffs will feature the top four teams from each division, which means if the Sharks can have breakout years from youngsters, step up their defense and goaltending, and score on a more consistent basis, they could be one of the shockers in a shortened season. This might even require the team to mix their playing of the cards with the

IMPACT Wrestling confirms Change To Hard To Kill PPV Main Event
After Signing LeMahieu And Kluber, What Else Do The Yankees Have Planned This Offseason?