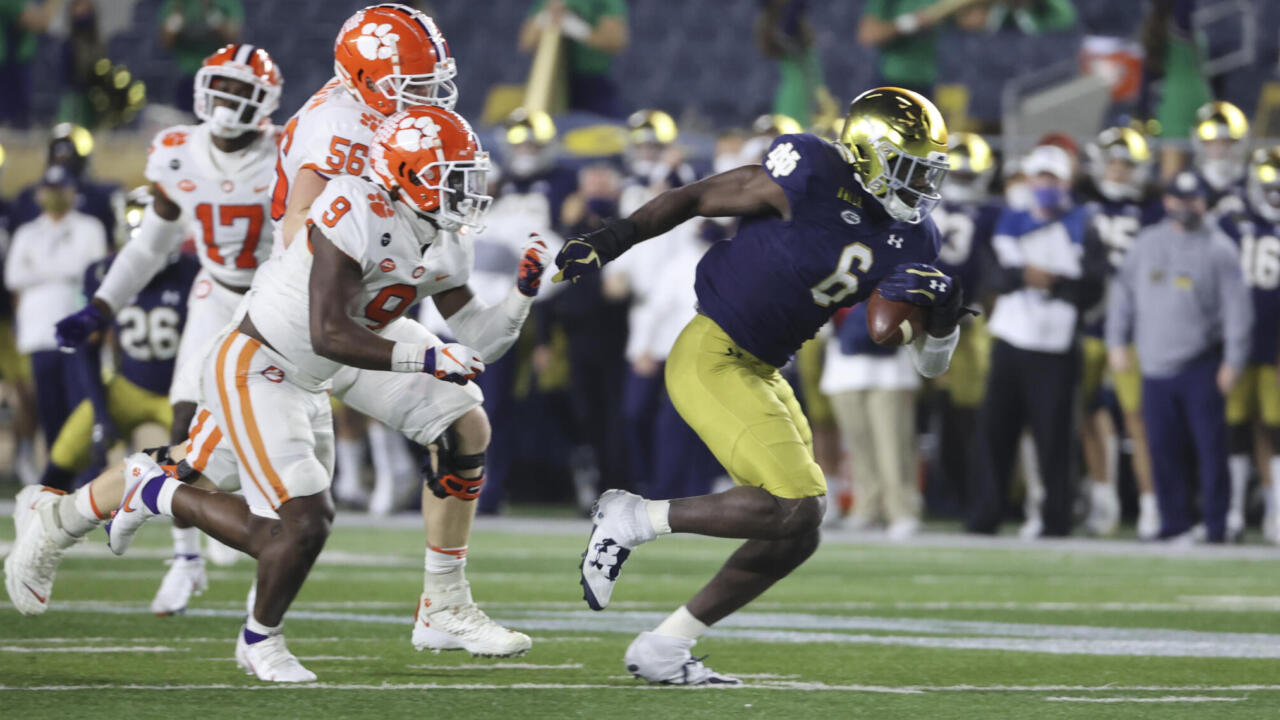 Whenever the Irish defense was on the field, all you had to do was look for the ball and you would probably see #6 right around it. Jeremiah Owusu-Koramoah established himself as a no doubt first round selection in the 2021 NFL Draft with one of the most versatile seasons you will ever see from a Linebacker.

After only playing in two games over his freshman and sophomore seasons, Owusu-Koramoah started all 25 games Notre Dame played during his junior and senior seasons. As a junior in 2019, he tied for the team lead in tackles with 80, with a team leading 13 of those for a loss. Three of his five and a half sacks came in the season finale, the Camping World Bowl against Iowa State. Along with the three sacks, he accounted for 9 tackles, 4 for loss, while adding a forced and recovered fumble.

JOK opened up his senior season with stellar games against Duke, Florida State, and Louisville. Then, he had his opportunity to show the world what kind of player he really is. In the Week 7 game against then No. 1 Clemson, “Wu” (as his teammates call him) brought the “wow”. He accounted for 9 tackles, two and a half of them for loss, a half sack, and one of the most dominant plays in Notre Dame history. While lined up in the slot, he timed his blitz perfectly, whizzing by fellow draft prospect, Wide Receiver Amari Rodgers into the backfield. His presence caused top Running Back prospect Travis Etienne to take his eye off of a pitch from Quarterback DJ Uiagalelei. Owusu-Koramoah stole the ball away from Etienne and scampered 23 yards for a touchdown, a huge play which helped then No. 4 Notre Dame take down the top team in the nation.

While his tackle numbers in 2020 didn’t match his 2019 numbers, it wasn’t difficult to understand why. He was used in coverage much more, and teams tried their best to steer away from his side of the field. Though he is undersized for a typical NFL Linebacker, he makes up for his lack of size with unmatched instincts and explosion. He was asked to line up as an Edge Rusher, Will and Sam Linebacker, Nickel Corner, and Safety. This versatility, along with impact on the field helped him win the Butkus Award as the nation’s best Linebacker. His impact in the NFL will be with a team that is willing to stay in base defense more often, which would allow his versatility to play into their hands.