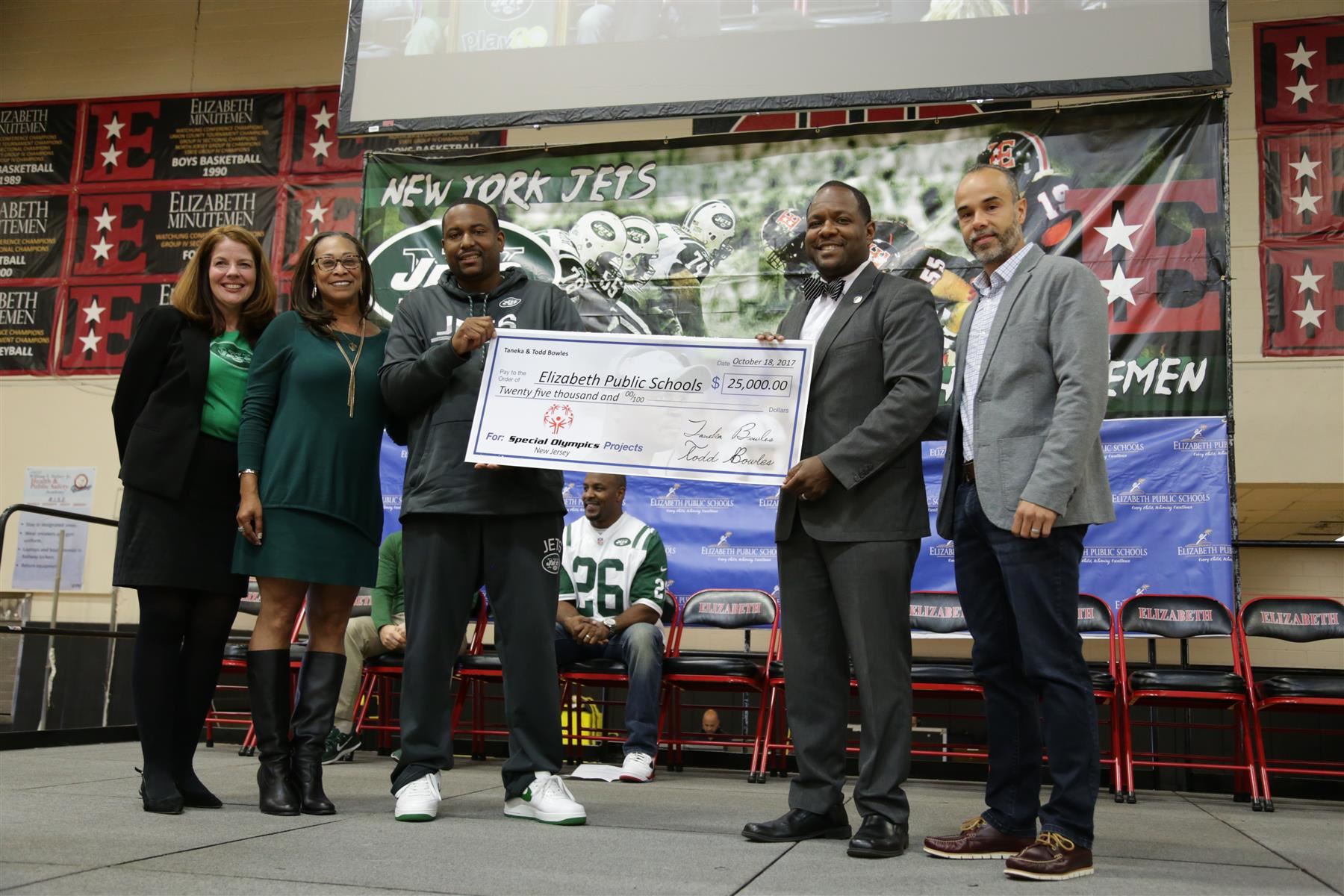 In August of 2017, the Jets along with STOMP Out Bullying and Municipal Credit Union hosted our 2nd Annual Jets Tackle Bullying Educators Symposium at MetLife Stadium. More than 200 educators from the tri-state area attended the event which featured a keynote speech on cyberbullying and a sharing of best practices session. Attendees had the opportunity to implement the Jets Upstander of the Week program at their school during the season which highlights an upstander on Twitter each week. Schools received 50 tickets to award to students along with a Jets Upstander of the Week t-shirt. Carteret Middle School has been selected for this honor for their 16 Jets Upstander of the Week posts during the season that displayed their efforts to stop bullying. Carteret Middle School is one of three schools recognized this spring.

The Jets Tackle Bullying program presented by Municipal Credit Union (MCU) is a collaboration with STOMP Out Bullying to tackle all forms of bullying by raising awareness, providing tools for educators, and preventing bullying for kids and teens. With support from MCU, the Jets have donated $200,000 to the New York City Department of Education to create Building Respect: Respect for All Conversation Skills online training simulations that are designed to enable New York City school communities to identify and address best practices in creating bias and bullying-free environments. In addition, the Jets have made available and distributed over 1,250 team branded STOMP Out Bullying Educator’s Prevention Toolkits at no cost to schools in the tri-state area. This toolkit enables educators to create meaningful dialogue, educate students through proven Social Emotional Learning methods, adopt character building in schools and involve both

students and faculty in working together to change school climate. To register for a toolkit, go to nyjets.com/antibullying.

The New York Jets take great pride in a long-standing, year-round commitment to our community. Programs funded by the New York Jets Foundation look to positively influence the lives of young men and women in the tri-state area by promoting fitness, supporting youth football and preventing bullying, particularly in disadvantaged communities. From launching football teams at urban high schools to urging students to be active for at least 60 minutes every day to fostering positive school environments, the New York Jets invest in programs that make a difference in the lives of others. In addition to our focus on youth development, the Jets support the efforts of the Lupus Research Alliance and numerous established charitable organizations and causes sponsored by the NFL.

About STOMP Out Bullying™

Created in 2005, STOMP Out Bullying™ is the leading national nonprofit dedicated to changing the culture for all students. It works to reduce and prevent bullying, cyberbullying, sexting and other digital abuse, educates against homophobia, LGBTQ discrimination, racism and hatred, and deters violence in schools, online and in communities across the country. In this diverse world, STOMP Out Bullying promotes civility, inclusion and equality. It teaches effective solutions on how to respond to all forms of bullying, as well as educating kids and teens in school and online. It provides help for those in need and at risk of suicide, and raises awareness through peer mentoring programs in schools, public service announcements by noted celebrities, and social media campaigns, and is recognized as the most influential anti-bullying organization in America.

MCU, now in its 101st year of service, is the oldest credit union in New York State and one of the largest in the country, with more than $2.7 billion in assets and more than 425,000 members. Its membership is open to New York City and Yonkers municipal employees; state and federal employees who work in the five boroughs; health care professionals who work in New York State; employees of private colleges in New York City and private and public colleges in Nassau, Suffolk, and Westchester; students enrolled in a college, university, school, or institution in the City University of New York (CUNY) education system and St. John’s University; members of select industry groups, certain family members, and qualifying retirees. MCU is an equal opportunity lender and deposits are federally insured to at least $250,000 by the National Credit Union Administration (NCUA), a U.S. government agency. For more information about Municipal Credit Union, visit www.nymcu.org