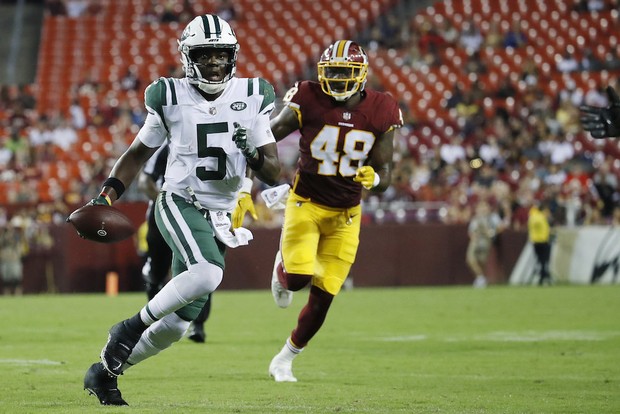 Following the first week of the 2018 preseason, and strong performances from Sam Darnold and Teddy Bridgewater the New York Jets have been one of the most talked about teams in the NFL.  Week 2 won’t do anything to change that. Sam Darnold was given his first start of the preseason against the Washington Redskins, leading his team on the first two drives was unable to reach the end zone but led a field goal scoring drive, but not reaching the end zone which Darnold says “Just couldn’t really finish in the red zone, which is my fault, I pride myself on being able to score touchdowns.”

In his first start the rookie went 8-11 with 62 yards passing, and reminded us again that things are only looking up from here. “Every single game that I play is huge,” Darnold said. “I feel like I’m gonna grow and get better every single day. That’s what I’m most excited about, is to see how much I’m gonna be able to grow and get better and build chemistry with the guys in the locker room. I think we have potential to do really good things.”

It is this potential that had NFL and Jets fans buzzing on what direction this team will go at quarterback. Will they put their trust in their first round pick and give him the keys of the car? Will it take a few weeks for coach Todd Bowles to make the change? But first of all Who will be the week 1 starter?

Another solid week two performance from Teddy Bridgewater only raises more questions with possible trades, trade value, or if he might steal that starting role. Bridgewater finished the game 10-of-15 for 127 yards with one touchdown and one interception. In his first two preseason games returning from Bridgewater has shown excellent decision making, great movement and pocket presence, and an ability to place the ball where he needs to. He has displayed a strong arm and willingness to go deep which is something the Jets have needed.

“I felt like a kid running around in the backyard tonight.” Bridgewater said “For me, I just wanted to get hit. I don’t know if it’s the right thing to do or say as a quarterback, but for me it’s just continuing to knock down that mental block that ‘Hey, you can do this.’ Some of those plays I could have thrown the ball away or run out of bounds. But I wanted to challenge myself to see if I could take a hit. It was fun.”

Teddy’s return from those two years on the sideline have more than exceeded expectations. Showing little limitations from his knee injury. His strong play has been reported to have drawn trade interest for at least two NFL teams. To which the Jets have said they are open to trading him “For the right price” the possibility of playing somewhere else doesn’t change anything for the 25 year old quarterback “For me right now, I’m just focused on this opportunity that I have right now,” Bridgewater said. “I’m blessed with the opportunity to continue to do what I love to do.”

With two quarterbacks that are excited for their new opportunities, and focused on improvement it there is an unusual excitement for Jets fans in August. It is hard to know which quarterback situation to root for, the possible game changing rookie quarterback? The once pro bowl quarterback returning from a devastating injury that is playing well? Or the reliable veteran game manager Josh McCown?

Stay tuned to backsportspage.com for more Jets news and statements from Todd Bowles, and updates on how the team as a whole is looking in preparation for the team to be cut to it’s 53 roster.