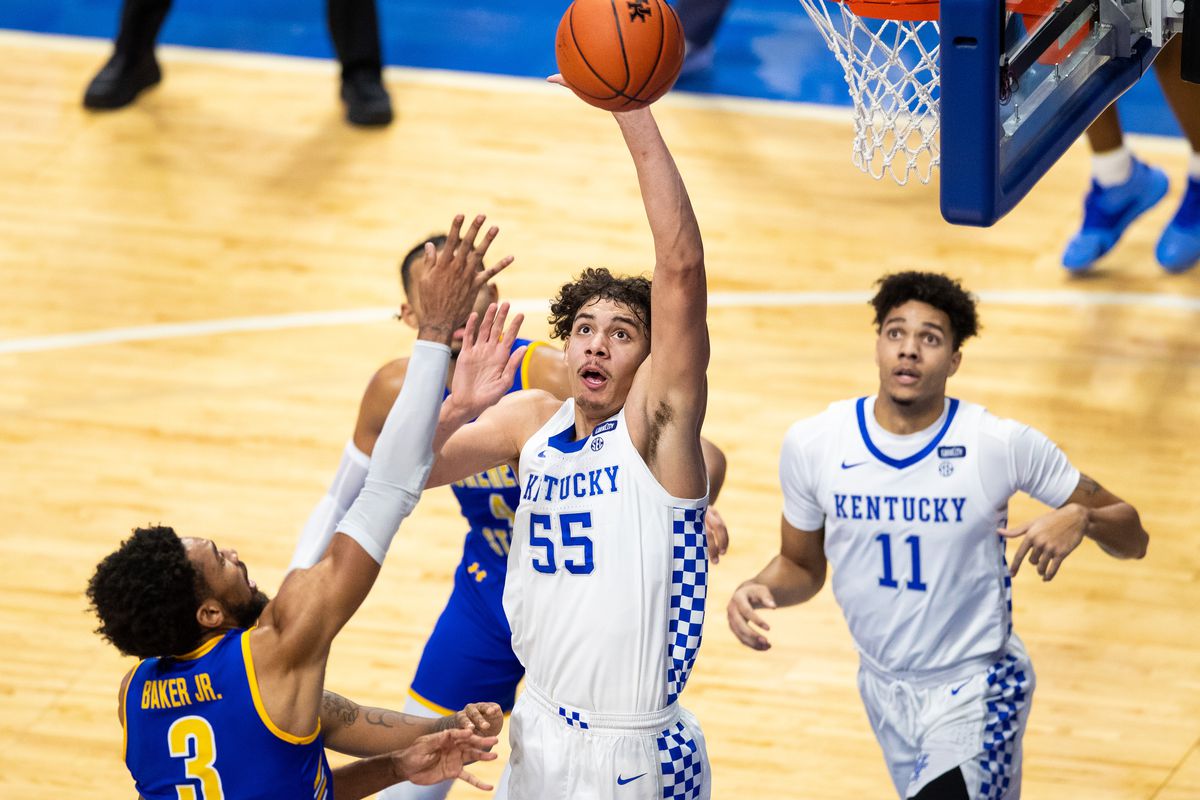 After a six-game losing streak, the likes of which Kentucky Basketball hadn’t suffered since before the Great Depression, the team is now on the verge of accomplishing something that’s happened quite often under John Calipari: a three-game winning streak. The mini turnaround began last Saturday in Starkville, as Dontaie Allen, the redshirt freshman guard from Pendleton County, turned in a performance for the ages in a win over the Mississippi State Bulldogs. Allen shot 7-11 from three, scoring 23 points in a heroic showing that will forever endear him in the hearts of the Big Blue Nation faithful. Following “the Dontaie Allen game”, senior grad transfer big man Olivier Sarr unleashed the beast with 24 points and seven rebounds in Kentucky’s Tuesday night come-from-behind win over Vanderbilt in Rupp Arena.

Neither win came without struggles, but the final scores alone are more reason for optimism than Kentucky fans have had since the team’s only other win over the Morehead State Eagles, all the way back on November 25th. At 3-6 on the season, the Wildcats certainly have a long way to go in righting the ship but their recent play, albeit still ugly, may suggest that the team is at least somewhere in the realm of turning a corner. Youth-filled Calipari teams do typically take a bit longer to hit their stride but even with a 2-0 start to conference play, this year’s squad will have to grow up fast in a COVID-impacted world that has made doing so extremely difficult.

Kentucky hits the road Saturday for a road test against their 5-2 rival, the Florida Gators. Florida will remain without star junior forward Keyontae Johnson, who will miss the remainder of the season with a heart condition after terrifyingly collapsing in a December game. Johnson was hospitalized and underwent a medically induced coma but thankfully he’s recovered enough to rejoin the Gator sideline as an assistant coach. Kentucky’s injury outlook certainly pales in comparison; however, they still enter Saturday’s contest with freshman guard Terrance Clarke’s status questionable due to an ankle injury. Kentucky freshman forward Cam’ron Fletcher is also questionable to play Saturday. Fletcher was suspended and subsequently left the team in the wake of playing time concerns following the Wildcats’ December 12th loss to North Carolina. Fletcher was welcomed back to the team last week but has yet to take the court in either of Kentucky’s two wins since.

In brighter injury news, Kentucky sophomore forward Keion Brooks Jr. announced Thursday that he has been cleared by team doctors to return to the court. Brooks, the lone returning player from last year’s roster had missed the first nine games of the season with a lingering calf injury. His status for Saturday’s game is still unclear, but this is certainly welcome news for a team starved of veteran leadership. At minimum, Brooks provides much-needed frontcourt depth behind Sarr and freshman forward Isaiah Jackson.

Even without Keyontae Johnson, Florida looks to be a tough matchup for Kentucky, especially on the road. Mike White’s Gators enter Saturday’s contest hoping to avoid a two-game skid, after falling to the 8-3 Alabama Crimson Tide on Tuesday. Nevertheless, Kentucky does have a path to victory, but they’ll have to focus in on a few keys to success.

#1 Take care of the ball

It sounds simple on paper, but Kentucky’s immaturity has shown often in their lack of ball security. 14.6 turnovers per game may not be unheard of for such a young team, but it’s especially crippling for an offense often plagued by poor shot selection and a resultingly bad shooting percentage. Kentucky is shooting just under 30% from behind the three-point line, 41.5% from the field and 67.6% from the “charity stripe”, all numbers that rank outside the top 200 in Division I.

With that level of shooting inefficiency, Kentucky has to either take great care of the ball to make every possession count, rebound at a crazy high rate or rely on having a hot shooting night, à la Dontaie Allen. In theory, the easiest of those three outcomes is taking care of the ball and trying to limit the careless mistakes.

With a talented combo of sophomore guards in Scottie Lewis and Tre Mann, Kentucky faces an uphill battle to beat the Gators in the backcourt. Grad transfer guard Davion Mintz and freshman guard Devin Askew have each improved their play in recent games, but Florida still appears to hold an advantage on the perimeter. Where Kentucky can excel in this game is using their size and length on the wings and in the post. Including Brooks and Clarke, Kentucky’s regular rotation (averaging more than 10 minutes per game) features seven players standing at least 6’7, most of who also have long wingspans. By comparison, Florida only features three such players.

Kentucky hasn’t done much well in the young season, but they have rebounded at a fairly high rate, grabbing 36.6 rebounds per game. Florida, on the other hand, has struggled to attack the glass, ranking 201st in Division I with 32.6 boards per contest. Rebounding will be especially important for Kentucky, given that Florida tends to score at a much more efficient rate. That means Kentucky will have to secure opportunities for second chance points and make them count. The Wildcats will also need to use their size advantage to block shots, something they’ve done well so far, with an NCAA 4th best six blocks per game.

The success that Kentucky has had so far has been fueled by a somewhat unlikely nucleus. Sarr has been mostly good, as we saw in the Vanderbilt game, but he has still struggled to consistently perform. Mintz has been arguably the most consistent contributor, which may come as a surprise to many considering he was certainly the less hyped of Kentucky’s two grad transfers. More recently, Allen has also stepped up to provide some desperately-needed perimeter offense, thus spacing out opposing defenses. Not bad for two grad transfers and a redshirt freshman.

Despite the generally strong outputs from the trio of Sarr, Mintz and Allen, as usual, Kentucky can only go as far as their star freshman take them. Forward Brandon Boston and Clarke were the Wildcats two most heralded recruits and neither has come particularly close to living up to expectations. Boston has suffered from an abysmal shot selection that has landed him with a team-worst 36% shooting percentage. Even more frustrating has been the flashes he’s shown where he can use his athleticism to blow by defenders and finish at the rim, only to immediately return to jacking up long contested twos. Calipari appears to be growing tired of the freshman’s antics, benching Boston for the last five or so minutes in the team’s tight win over Vanderbilt. Clarke perhaps gets somewhat of a pass given that he’s missed time and played hurt with his ankle injury, but even prior to that he wasn’t exactly lighting the world on fire. To beat Florida and to win moving forward, Kentucky will need their star recruits to live up to their potential at the collegiate level. If Clarke misses Saturday’s game, Sarr will carry even more weight on his already heavy well-loaded shoulders. Kentucky has a long way to go before they’re out of the woods, but a win in Gainesville would certainly help continue their recent momentum. Will the Wildcats stay perfect in 2021 or is more of the same in store for the New Year? Tune in Saturday at 5 p.m. to find out.

Nets Stun 76ers 122-109
Yeah, the NBA is Cool, but Have You Tried NBA Twitter? – Health and Wellness Edition