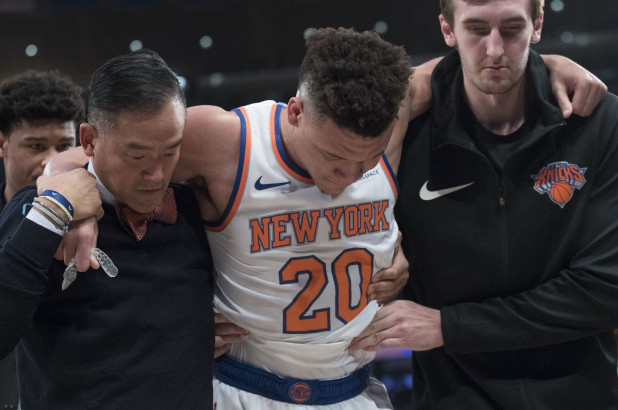 As the New York Knicks continue to build a new culture for the franchise, they now have an injury that will affect their process. Kevin Knox’s ankle injury looked to be a freak accident off a drive to the basket. Now he was down for a while but what’s interesting about all of this is the fact that this will slow down his growth to be a potential all-star.

Knox is 19 years old and at 6-foot-9-inches capable of becoming a legit second option for the Knicks. He can take pressure off a healthy Kristaps Porzingis, especially in half court situations. The rookie is an important piece of the Knicks’ future and players on the team know that.

“It’s unfortunate,” Trey Burke said according to the New York Post. “It’s the ugly thing about the sport. Kev is going to be a big piece of this team. I talked to him back in the locker room. I told him to keep his head up. We’re going to need him back and get that ankle well. I’m sure he’ll be back out there soon.”

According to The Athletic’s Shams Charania, Knox is expected to be out about 2-4 weeks before he can come back on the court. Those are important weeks for a player with raw talent, trying to get out of a shooting slump, and possibly being a rookie of the year candidate. The best teacher in life is experience no matter what career it is. Knox needs as much experience as possible. Yeah working on his jumper and getting easy dunks in practice develops confidence against any opponent. But when the bright lights are on, it’s all about the mental aspect of the game.

The 19-year-old needs to be a mentally tough player. Coach David Fizdale can help them with that. The tools are there to be an all-star caliber player. But the mental approach will make him great. Let’s see if he will bounce back from an ankle injury and help the team win games.