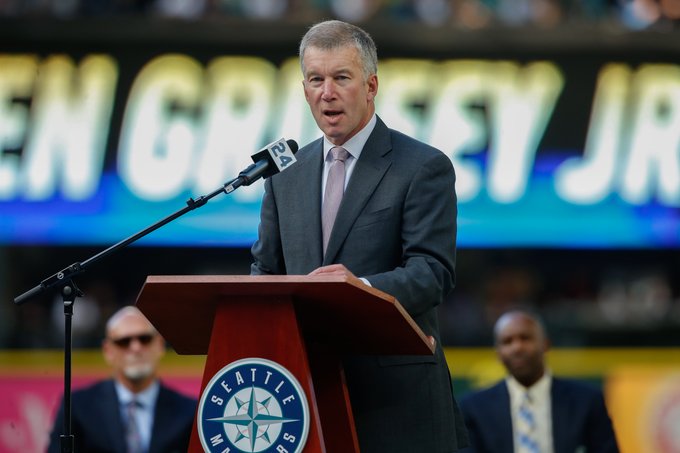 Seattle Mariners president and CEO, Kevin Mather, officially resigned from his post Monday. Mather’s resignation comes as a result of immense backlash from disparaging comments he made earlier this month. These controversial remarks surfaced Sunday but were delivered to a Rotary Club earlier this month. During a 45 minute talk with the club, Mather disrespected numerous Mariners players.

A leaked video from the event shows Mather voicing criticism of both top prospect, Julio Rodriguez, and former pitcher turned Mariners special-assignment coach, Hisashi Iwakuma. The disgraced executive said Rodriguez was “loud” and his “English is not tremendous.” In regards to Iwakuma, Mather said “His English was terrible” and that he was “tired of paying his interpreter.”

Mather’s comments were prefaced by compliments for the players, however, that hardly excuses going on to criticize their language skills. Many took these insults to be hateful, ignorant and racist. Mariners chairman and managing partner, John Stanton, said he was “extremely disappointed.” Stanton went on to call Mather’s comments “inappropriate.” He added they “do not represent the organization’s feelings about players.”

In addition to his culturally insensitive remarks, Mather had choice words for more of his players. He called pitcher Marco Gonzales “boring.” He then went on to fabricate a story about Gonzales pushing a teammate against a locker. Mather called third baseman Kyle Seager “overpaid.” He even admitted to planning to manipulating prospect Jared Kelenic’s service time. Mather indicated he’d keep Kelenic in the minors because he declined a club friendly contract extension.

Mather’s resignation appears to be a positive step towards respect and equitable inclusion. However, the incident raises concerns of a larger cultural issue in front offices. These discouraging comments come at a time when MLB players already deeply mistrust ownership and front offices. Such blatant disrespect hardly helps to mend fences as the two sides prepare for a CBA battle.

Mather now finds himself out of a job after being with the Mariners since 1996. His comments go to show that speaking English well does one little good, if they use those abilities to spew hatred and belittle others.