Key Takeaways from the Kings’ Start 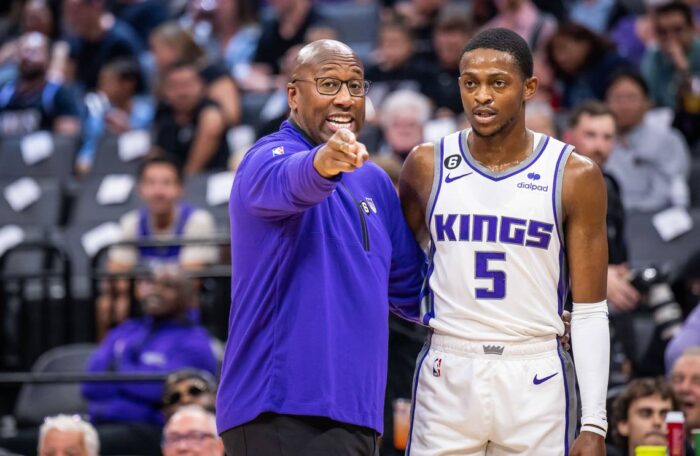 Summer League and preseason looked quite promising for the Sacramento Kings. Undefeated in the preseason and many new faces, there’s a new-found optimism in Sac-Town. The 16-year playoff drought has been the elephant in the room for the Kings.

Defense has never been one of the Kings’ strong points. Last season, Sacramento was second to last in defense rating for the Western Conference. General manager Monte McNair and the front office understood this, which resulted in acquiring Malik Monk, Kevin Huerter, Neemias Queta, and KZ Okpala this summer.

The regular season did not start with a victory, losing to the Portland Trailblazers. The Kings gave up 33 free throws and committed 16 turnovers. After the loss to the Trailblazers, Coach Mike Brown expressed his thoughts on the Kings’ performance.

“We didn’t do the little things,” said Brown. “I did not recognize the team that was out there most of the night. I thought the guys tried to compete. But, they did not compete the right way.”

Against the Clippers, the Kings almost seemed to be repeating the same mistakes.  However, in the second quarter after leaving Paul George wide open for a three-pointer, Coach Brown’s timeout conversation was the shift that propelled the Kings defensively.

In spite of the King’s fight, there were too many missed opportunities for defensive stops and 57.7% on free throws. The Kings fell to the Clippers (111-109).

Silver lining: The Fox is back and the rookie has arrived.

De’Aaron Fox put up a fight on both sides of the floor. Fox put up 34 points, four assists, and four rebounds with two poster dunks. The Fox made multiple quick decisions that resulted in getting stops and transitions.

Keegan Murray did not disappoint in his first regular season debut against the Los Angeles Clippers. Entering with a standing ovation, Murray averaged 10 points and 3 rebounds before halftime. Not to mention a posterizing dunk, Paul George did not have time to contest. The rookie also made a fast block to Norman Powell’s layup, wowing the crowd.

Keegan Murray's first shot in the NBA and its a SWISH 🔥 pic.twitter.com/sfFjboEi3n

Bottom line: This is a newly assembled team with a new head coach. The Kings are going to tighten up defensively and focus on free throw shooting.

Phoenix Suns Display Renewed Title Hopes
George Showed Out, But The Other’s Have to Play Better…