Kid Stardom: The Young Talent of The New York Rangers 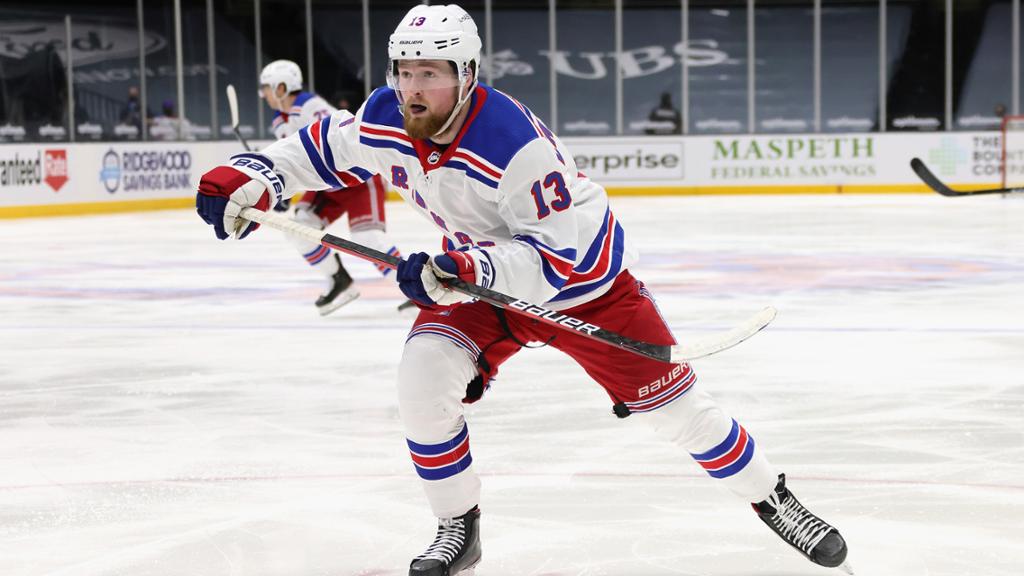 As the game of hockey grows and old talents come and go, newer ones emerge in their place. Like the flowers that sprout in the spring, new players start to show their worth and brilliance each season. This lies especially true in the young talent of the New York Rangers’ “Kid Line,” all of whom are 23 years old and younger. These players are: Alexis Lafrenière, Filip Chytil, and Kaapo Kakko, alongside defenseman K’Andre Miller. This article will shine the much deserved spotlight on these players and their skills, as well as highlighting their great careers to come if the odds are in their favor.

The New York Rangers are one of the youngest teams in the NHL with an average age of 25.4. Only slightly older than the Winnipeg Jets, Anaheim Ducks, Los Angeles Kings, New Jersey Devils, Columbus Blue Jackets, and Buffalo Sabres, all of which are facing rebuilds. Yet, the Rangers who have a young core as well as a veteran one, is different than all these teams.

The Rangers Kid Line when placed together on the ice, work like a machine and have chemistry unseen in any other young team listed above. Something is different. But what? Could the Rangers coaches have placed enough pressure and opportunity on the young lineup to perform alongside the team veterans, thus allowing them to shine as brightly on the ice as the older players? It seems that this is the case. However to fully appreciate the Kid Line, we have to look at the individual players and what each one contributes to the success of the line itself and the team.

Lafreniere was selected with the first overall pick in the 2020 NHL Draft by the New York Rangers after a standout performance in the Quebec Major Junior Hockey League (QMJHL). The left wing from St-Eustache, Quebec led the QMJHL with 112 points (35 goals, 77 assists) in 52 games for Rimouski in 2019-20. He also scored 10 points (four goals, six assists) in five games at the 2020 IIHF World Junior Championship, helping Canada to a first place finish and earning tournament MVP honors. Two years earlier, Lafreniere helped Canada finish first at the Hlinka-Gretzky tournament.

Lafreniere was named the QMJHL’s most valuable player for a second consecutive season. He also won Canadian Hockey League player of the year award for the second season in a row. Lafreniere and Sidney Crosby (2004 and 2005) both from Rimouski, are the only players to win the award twice. He was the first Rimouski player to be ranked Number 1 on Central Scouting’s final North American skater list since Crosby in 2005 and the first Quebec-born skater to be taken first overall since the Tampa Bay Lightning selected Vincent Lecavalier in the 1998 NHL Draft. In three QMJHL seasons, Lafreniere scored 297 points (114 goals, 183 assists) in 173 games.

In his first season in the NHL (2020-21), Lafreniere scored 12 goals and 9 assists in a shortened 56 games. Followed by a much better performance last season (2021-22), with 19 goals and 12 assists in 79 games. In the 2021-22 playoffs, Lafreniere scored 2 goals and 7 assists in 20 games. His top skills include great offensive play and assisting skills, setting up clinching goals in the Rangers playoffs appearance. This performance shows that Lafreniere still has plenty of room to grow and his career is looking on the rise. Lafreniere is a vital and extremely talented member of the Kid Line. For a rookie, Lafreniere has an outstanding career ahead of him if things keep going his way.

The New York Rangers selected Chytil, a center from the Czech Republic first overall in the 2017 NHL Draft. Chytil played for Berani Zlin in the Czech Extraliga in 2016-17, finishing second among U18 players in goals (5), points (8) and games (38). He signed a three-year, entry-level contract with the Rangers on July 14, 2017.

After winning the 2017 Lars-Erik Sjoberg Award as the top rookie in training camp, Chytil made the opening-night roster against the Colorado Avalanche on October 5th, 2017 and played two games before being sent to Hartford of the American Hockey League. He had 31 points (11 goals, 20 assists) in 46 games before being recalled by the Rangers on March 25, 2018. Chytil scored his first NHL goal five days later in a 7-3 loss to the Tampa Bay Lightning and finished with three points (one goal, two assists) in nine games.

Chytil had his best performance so far in the 2019-20 season with 14 goals and 9 assists. In the 2021-22 playoffs, Chytil scored 7 goals and 2 assists. Chytil has excellent skating skills and shot creativity. While he is still struggling to find consistency within the Rangers roster, his input to the team and the Kid Line is extremely valuable and we can have high hopes in his future career being bright.

Drafted by the New York Rangers 2nd overall in the 2019 draft, Kaapo Kakko is the third edition in the Kid Line. While being out with an injury for most of the 2021-22 season, he still posted 7 goals and 11 assists, and 2 goals and 3 assists in the playoffs when he returned for action.

The Finnish player at his career height so far reached 10 goals and 13 assists in his first year in the NHL. Kakko has exceptionally high hockey IQ and reads the game extremely well, allowing the rest of the Kid Line to follow his pace. Always a step ahead, Kakko is a great puck handler. His significance to the Rangers and the Kid Line as a whole is extremely crucial. If he can stay healthy, he will hopefully become an exceptional player.

The New York Rangers used the 22nd overall pick in the 2018 NHL Draft to choose K’Andre Miller, a 6’5 defenseman. Miller was selected after two strong seasons with the USA Hockey National Team Development Program, including 29 points (9 goals, 20 assists) in 58 games with the NTDP U18 team in 2017-18. He continued his development at the University of Wisconsin. In 2018-19 he scored 22 points (5 goals, 17 assists), made the Big Ten All-Rookie team was an honorable mention for the Big Ten All-Star team. Miller also had one assist in six games to help the United States finish second at the 2019 IIHF World Junior Championship.

The following season Miller scored 18 points (7 goals, 11 assists) in 26 games with Wisconsin and again was an honorable mention for the conference all-star team. He also had two assists, led the U.S. with an average ice time of 19:24 in five games and was an alternate captain at the 2020 WJC. In addition to playing in the WJC twice, Miller has played for the U.S. at the 2018 IIHF World Under-18 Championship and the 2016 World Under-17 Hockey Challenge.

Miller agreed to terms on a three-year, entry-level contract with the Rangers on March 16th, 2020. He made his NHL debut Jan. 14, 2021, with one shot on goal in 13:59 of ice time in the Rangers’ 4-0 loss to the New York Islanders. Miller got his first NHL point in his fourth game, an assist on Kaapo Kakko’s second-period goal in a 4-3 shootout loss to the Pittsburgh Penguins on January 22nd, and scored his first goal in a 3-2 loss to the Buffalo Sabres on January 26th.

Miller contributes immensely to the Rangers defense line, mentored by captain Jacob Trouba, and provides a vital defensive core to the Kid Line. His skills as a defenseman are outstanding and his future career as a Ranger and as a defenseman are looking bright.

The Kid Line is full of greatly talented young players, all of whom contribute to the overall Rangers roster and playoff success. The future is bright for the Kid Line, and while new players will emerge once again, it is good that we have a name for the star crew.