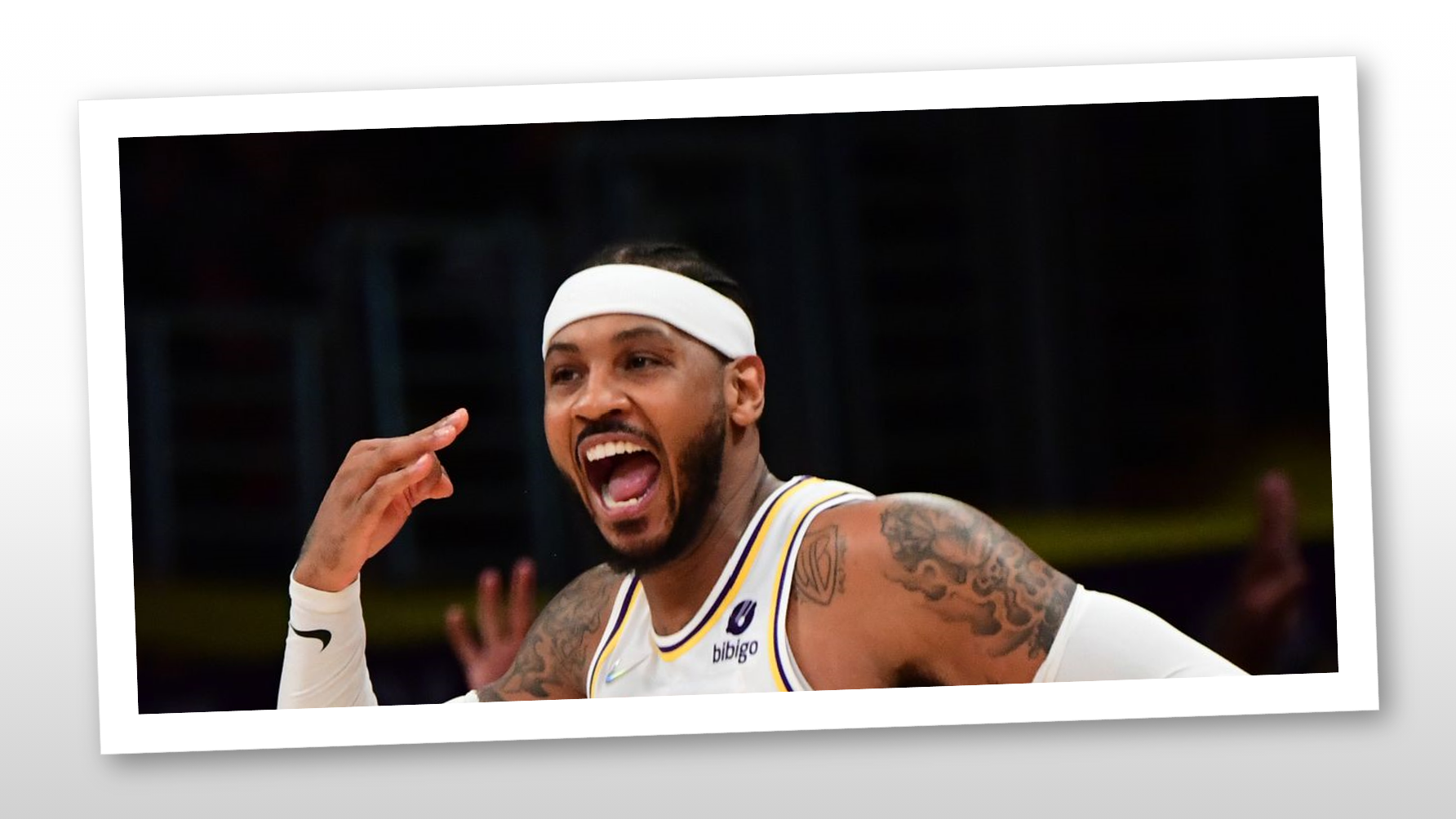 Every team that was a road team won last night, except the Memphis Grizzlies – which means the Los Angeles Lakers won their first game of the season after a string of losses dating back to the pre-season; actually dating back to last year’s playoffs.

One of the smartest acquisitions the Lakers got this summer was Carmelo Anthony, a prolific scorer, but someone known for a questionable work ethic and a selfish need for a certain amount of touches. 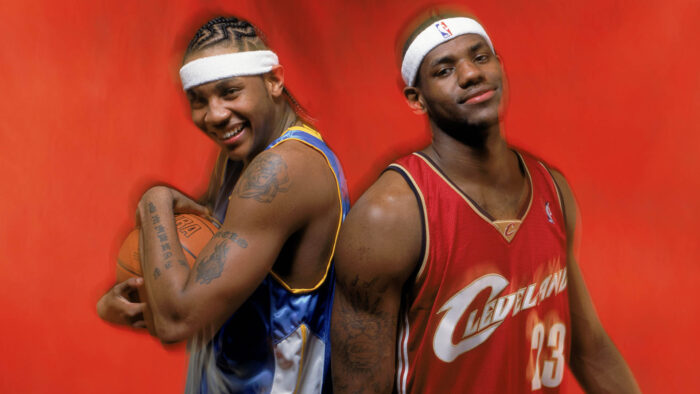 Drafted the same year as LeBron James and Dwyane Wade, Anthony is one of the top five draft picks that doesn’t have a championship ring (James, Wade, and Chris Bosh got their together in Miami, while Darko Milicic, despite being a draft bust at No. 2 ahead of Anthony, has a ring from the Detroit Pistons’ 2004 championship.

That has been the chip on Anthony’s shoulder, who has made stops in New York, Oklahoma City, Houston, and Portland after arguably his best basketball in Denver playing for head coach George Karl.

Sitting with him and Karl at Vegas Summer League, I recall his exuberance and can remember when he was having fun playing the game. That seemed to change when he got to New York as the onus of winning was solely on his shoulders, and though his scoring average went up, his reputation began taking hits.

A fresh start in Oklahoma City started the learning process and humility. No longer was he the alpha male on the squad, though he longed to be. It’s hard to be the alpha when Russell Westbrook is in the room and on the floor. (Russ is learning that now in his assimilation to the Lakers).

He was out most of the next season, playing only 10 games for the Houston Rockets alongside James Harden, but took that opportunity to work on his game, and that’s where years of lackadaisical work ethic turned into day after day at places like The Summit in NYC, where Anthony honed his craft.

An opportunity talked about in 2018 became a reality in 2019 when Anthony became a member of the Portland Trailblazers, a team branded already by Damian Lillard and C.J. McCollum. Anthony slowly worked his way in with humility and talent, and became an integral part of Portland’s success for the next two years.

When LeBron called, he was ready. Like all the other All Star members of the Lakers, he suffered through a winless pre-season, and the first two games of the regular season. 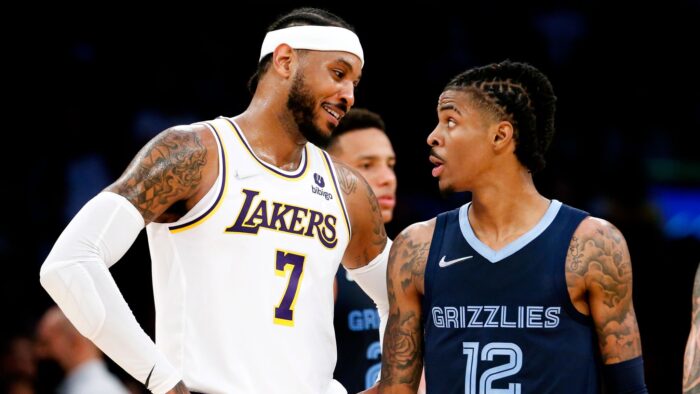 Like his friend and mentor, LeBron James, Carmelo Anthony has matured and come full circle, and well deserves his latest and best shot at a championship ring with the Los Angeles Lakers. 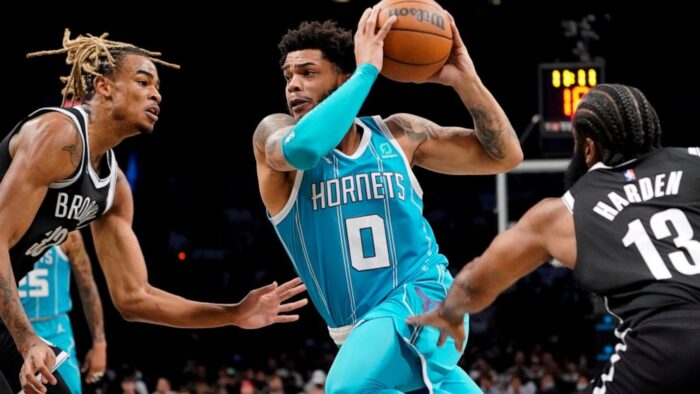 The Charlotte Hornets are one of three teams that are 3-0 in the NBA after the first week, after overcoming 38 points by Kevin Durant and dismantling the rest of the Brooklyn Nets.

Like the Lakers, the Nets are learning on the fly to assimilate new players and returning players. While Patty Mills had gone 10 for 10 from the arc this season, he crashed to earth last night shooting .167 from downtown. Durant has had to carry this team through Kyrie Irving’s absence and the assimilation of others. James Harden was the only other solid contributor in the game, scoring 15 points, seven rebounds, and eight assists. 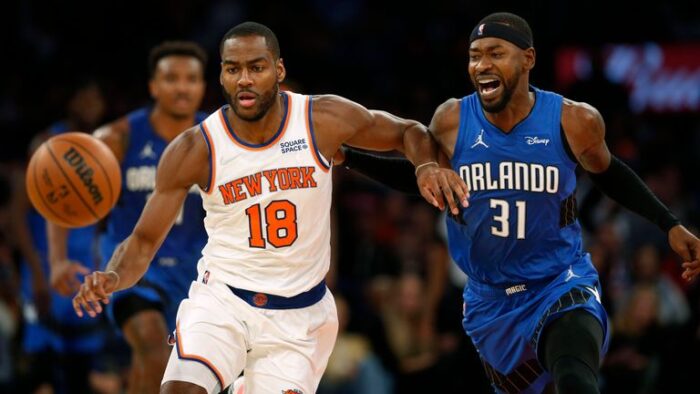 Since the Cole Anthony – Julius Randle battle was all but a wash, it was up to the other Knicks to rise to the occasion. Truthfully, only Derrick Rose did, supporting Randle with 23 points on the night. R.J. Barrett only had 12 on .294 shooting and Kemba Walker – for all the buzz of him coming home to New York – has yet to have a significant game, only scoring 10 last night on four of eight. Mitchell Robinson also finished with 10 and 10.

Anthony had more help as every starter, plus Terence Ross off the bench, scored in double digits. While Anthony nearly hit the triple double, Ross dropped in 22 points – all in the fourth quarter, where Orlando outscored the Knicks 36-24. Jalen Suggs and Wendell Carter each contributed 11 points, while it was 10 points apiece for both Mo Bamba and Franz Wagner.

NEXT UP
Magic at Heat – Tonight
Sixers at Knicks – Tuesday 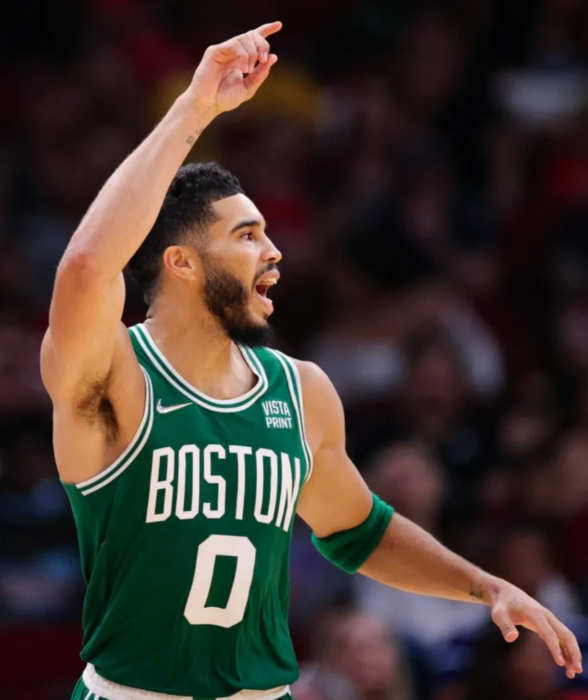 Jayson Tatum and the Boston Celtics got their first win of the season last night, taking advantage of the youth and inexperience of the Houston Rockets, though Jalen Green broke team records for an 18 year old, scoring the most points and hitting the most three pointers.

Tatum scored 31 points on a night when Jaylen Brown was unavailable due to left patellar tendinopathy. Brown had scored 40 in Boston’s first game, a loss. Tatum got assistance from Dennis Schroder and #VFL Grant Williams’ 18 point efforts, as well as a 17 point, 10 rebound double double from Al Horford. The Celtics were also without Enes Kanter and Juancho Hernangomez, giving Williams the opportunity to roam the paint at will.

It wasn’t the blowout it seemed, though the Celtics did manage to keep the Rockets at arm’s length. Already impressive this season has been Christian Wood, who had 20 points and nine rebounds. But Green came into his own last night, leading the team with 30 points, despite the loss. Kevin Porter, Jr. added 15 points and Jae’Sean Tate finished with 12 points, eight rebounds. But it was the beginning of a maturation process for Alperen Sengun, who was seemingly involved in every play in some way or another in the second half. The 6’10” Turk should probably be a starter for the Rockets and will likely be a solid contributor sooner rather than later.

NEXT UP
Celtics at Hornets – Tonight
Rockets at Mavericks – Tuesday 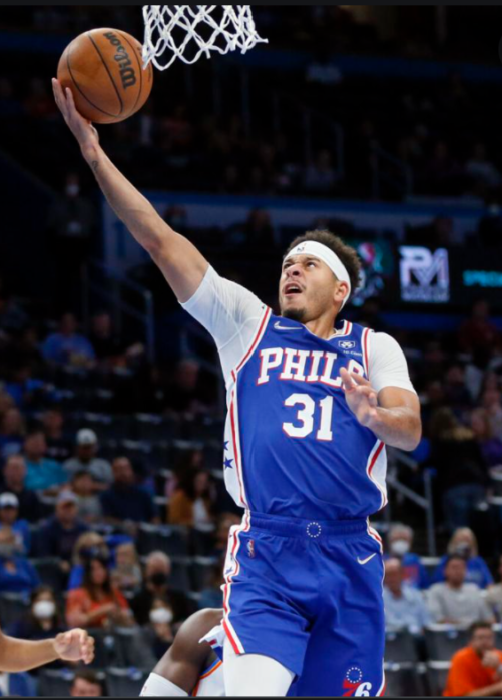 Little brother Seth is living up to the Curry name, having lit up the Oklahoma City Thunder last night in the Paycom Center, shooting .600 from the field, and .750 from downtown to score 28 and lead the Philadelphia 76ers to the road win, and a 2-1 record.

Joel Embiid finished with 22 points, nine rebounds, and six assists. #VFL Tobias Harris and Tyrese Maxey ended up with 14 points each (Harris also matched Embiid’s nine rebounds), Georges Niang had 12 off the bench, and Danny Green finally got his name in the books with 11 points.

Shai Gilgeous-Alexander led all scorers with 29 points, six rebounds, and eight assists, but it wasn’t enough. Josh Giddey finished with 19 points, eight rebounds, and seven assists, while Luguentz Dort was the only other double digit scorer with 13 points. It appears general manager Sam Presti has finally imploded this team, seemingly having become the guy playing Monopoly that has all the houses, hotels, and utilities that no one wants to buy.

Think Randolph and Mortimer Duke at the end of ‘Trading Places.’

NEXT UP
Sixers at Knicks – Tuesday
Warriors at Thunder – Tuesday

1,619 miles to the West, big brother Stephen Curry was fewer shots from the field overall, but getting to the free throw line to lead his team to a 3-0 mark against their Northern California rival Sacramento Kings, who dropped to 1-2 after Curry dropped 27 on ‘em.

Sacramento was led once again by Harrison Barnes, who hit for 24 points and seven rebounds. Davion Mitchell scored 22, while De’Aaron Fox finished with 17, five, and six, and Richaun Holmes ended the night with 16 points, 11 rebounds.

NEXT UP
Warriors at Thunder – Tuesday
Kings at Suns – Wednesday

Ja Morant packed his Superman cape on this trip to L.A., and it worked on Saturday night against Paul George and the Los Angeles Clippers, despite 41 points from George. But this other L.A. team isn’t so one-dimensional as the Clippers.

More than likely, Morant was mentally and physically prepared to battle LeBron James, Anthony Davis, and Russell Westbrook. He forgot about Carmelo Anthony. 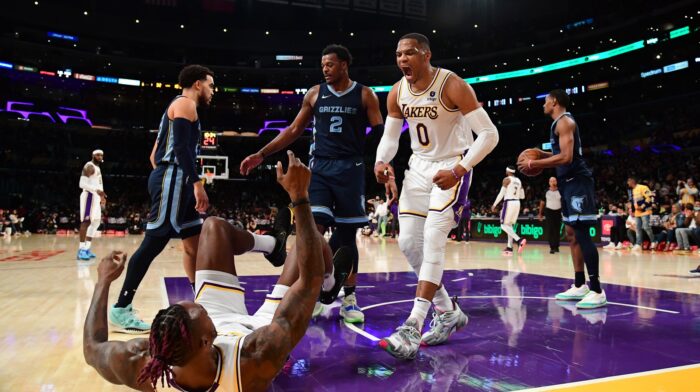 It was Anthony who led the Lakers to their first win of the season last night, scoring 28 points on .667 shooting from the field, .750 from downtown, and 100 percent from the free throw line, all in 27 minutes off the bench. Davis finished with 22 points and eight rebounds, while James went for 19 and six, and Westbrook flirted again with a triple double, scoring 13 points, seven rebounds, and 13 assists. Malik Monk chipped in 12 and Kent Bazemore added 11 points.

Morant was a one-man show with a game-high and league-high 40 point performance. He also had 10 assists, three rebounds, and three steals, and is still my favorite for MVP. But he also needed more help than Desmond Bane’s 17 points, Steven Adams’ 14 and 16, De’Anthony Melton’s 13 and Jaren Jackson, Jr.’s 12 points.

It was the Grizzlies’ first loss of the young season. Adams and Jackson should have made a bigger impact in the paint with DeAndre Jordan starting and Davis coming off the bench.

That’s the growth the Grizzlies need to make the tough West even tougher.

NEXT UP
Lakers at Spurs – Tuesday
Grizzlies at Trailblazers – Wednesday