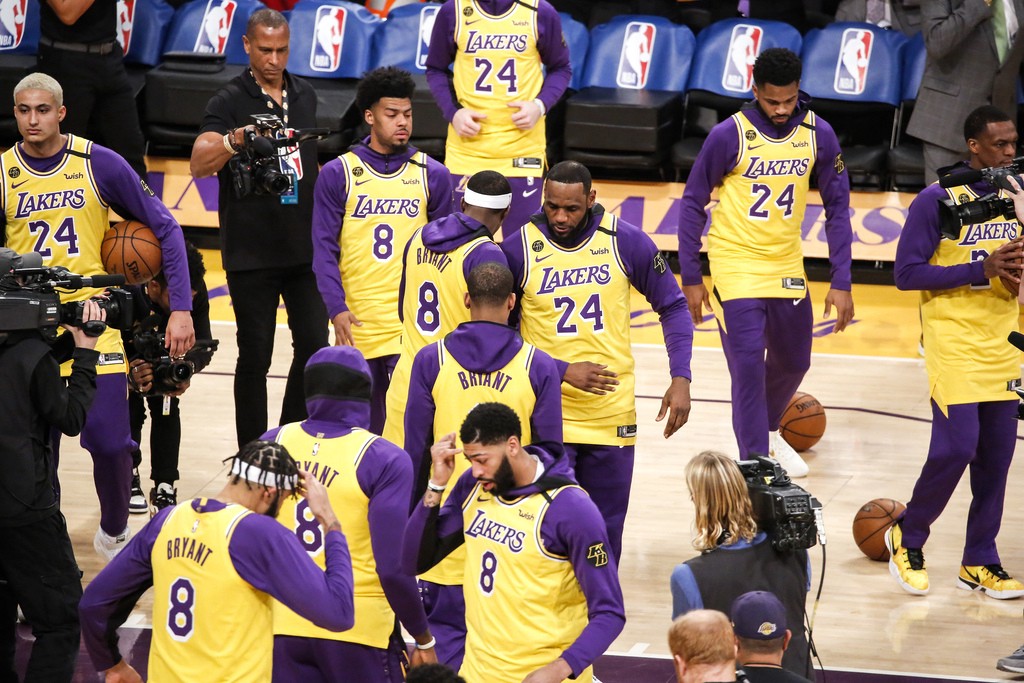 Losing their last two games, the Los Angeles Lakers have a tough challenge ahead of them on Saturday night against the youthful Boston Celtics. LeBron James and company will find out exactly what kind of team they are. Expectations are that they will come out with the intensity right from the get go; however, lately they’ve been the exact opposite of that.

In a primetime matchup against the Philadelphia 76ers on Wednesday, the Lakers came into Philadelphia undefeated (10-0) on the road before dropping the ball, losing 107-106. However, it was the comeback late in the fourth quarter that gave a scare to Philadelphia. After being down by as much as 14 with a little over five minutes remaining LA flipped the switch.

What looked like the white flag was coming once James headed to the bench, the supporting cast sparked a run. So much that James checked back in slightly after. Down by one coming out of a timeout, Anthony Davis hit the go-ahead layup from a James assist putting the Lakers up 106-105 with 11.2 seconds remaining. Needing one stop to end the game, Tobias Harris had other plans. Instead Harris called for the high screen and roll in order to get the switch from James to Alex Caruso on him. Once Harris had the matchup he desired it, all he had to do was get to his spot and drain the shot over the smaller Caruso. And that is exactly what ended up happening. It was good defense but just a better shot on Harris’ end.

Sixers coach, Doc Rivers, gave praise to the Lakers for their efforts late in the fourth saying, “They showed up like champions … it’s hard to kill them,” Doc Rivers told reporters, via Tim Bontemps of ESPN.

After losing to Philly, the Lakers headed out to Detroit to take on the slumping Pistons. What  looked to be a tune up game actually became a wake up call for the purple and gold.

Back-to-back games can be seen as both a positive and negative in the NBA. Positive in the fact that teams have a chance to get back on the court after a loss. Negative in the fact that it can continue to keep a team down should they lose. Not to mention that the Lakers are a veteran team and aren’t really built for many back-to-backs.  Anthony Davis was out with a bruised right quad against Detroit, but against one of the worst teams in the league there shouldn’t be any excuses.

To simply put it, the Lakers lacked enthusiasm and energy in spurts during the game. They made mistakes left and right, and overall were out played. Keeping it close until the fourth quarter, the Lakers simply ran out of gas. Detroit out hustled the Lakers in the fourth and wanted it more. The Pistons were more active on both the offensive and defensive ends of the floors, taking advantage of the Lakers’ turnovers and converting them into baskets. And this time, there would be no comeback from the purple and gold losing to Detroit 107-92.

Now with another primetime matchup against their bitter rival the Boston Celtics all eyes are on Los Angeles. The duo of Jason Tatum and Jaylen Brown have made monster headlines this season so far. Tatum continues to evolve his game as he is currently averaging 26.5 points, 6.8 rebounds, 3.8 assists and 1.2 blocks a game. Jaylen Brown is coming into his as well showing to be a potential first time All-Star should his stellar play continue. Brown as of now is averaging 27.1 points, 5.6 rebounds, 3.5 assists and 1.5 steals per game. Brown is also having a career year shooting the ball this year shooting 52.2% from the field and 44.1% from behind the arc.

After getting chin-checked twice, this is the perfect stage to see what team the Lakers are. Will they just continue to slump and drop a third straight or will they pull their pants up and dominate as we’ve seen thus far this season?