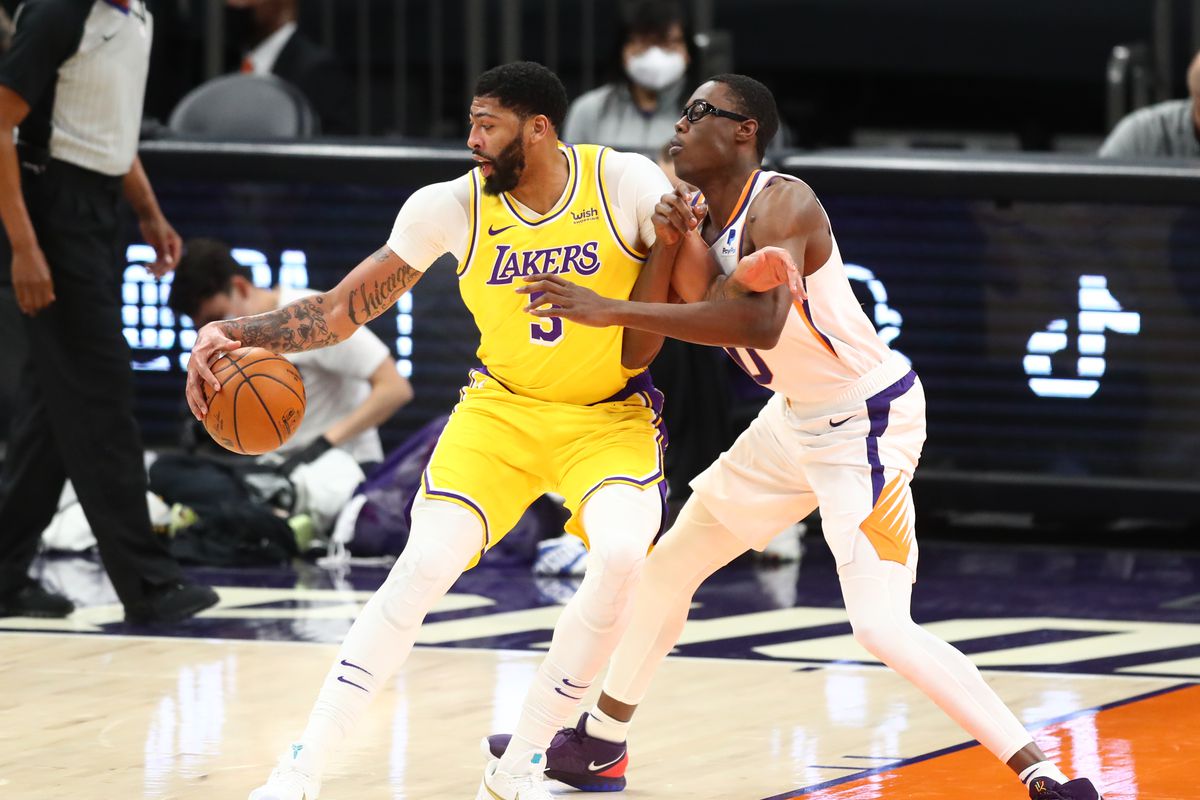 The Los Angeles Lakers defeated the Phoenix Suns 114-113 in their final matchup of the preseason Friday night. The Lake Show ended the preseason undefeated (4-0) showing flashes of their potential with the new pieces added this offseason.

After a rocky first quarter, the Los Angeles Lakers came alive and did not look back. Large part was due to Anthony Davis coming out and dominating like he did in the NBA Bubble. Davis filled the stat sheet tonight finishing with 35 points, six rebounds, three assists, two steals and three blocks. In addition to his big night, the newly re-signed big was a scorching six out of seven from behind the arc. Should Davis continue to become a threat from three point land, that only makes him that much harder to defend. Head Coach Frank Vogel was very expressive on Davis’ three point shooting.

It carries a heavy load, takes a lot of pressure off every one else when the ball is going in like it was for Anthony. We want him to continue to be aggressive from the three point line.”

LeBron And the Offense Show Up Again

LeBron James also came out and had himself a rather quiet but effective outing in the last preseason game. James had 20 points, eight rebounds and four assists to cap off his night. However just as Davis, James was also had this three ball falling tonight making three out four.

“We’re not where we want to be long term but that’s absolutely ok,” James told Lakers Reporter Mike Trudell. “It’s a long season, it’s a long journey. Credit to the guys we’re gotten better as the days go by.”

As a team, Los Angeles shot a phenomenal 50.6% from the field as well shooting 53.3% (16-30) from downtown. One thing that this team is excels in is the extra pass and it was evident multiple times. This team does not lack unselfishness whatsoever and that will make the difference in their title hopes.

The Lakers offense was clicking tonight just as it has the entire preseason, but it was the defense that was key to tonights victory. Phoenix came out shooting to begin the game, scoring 39 points to end the first quarter. But would later come down to earth after the Lakers clamped down the rest of the game. Los Angeles would hold the Suns to fewer and fewer points after each quarter, 30 in the second, 23 in the third and 21 points in the fourth.

“The way our guys started in the second half defensively was a big factor in the game,” Lakers Coach Frank Vogel said. “It’s going to be a challenge for us early on in the season due to the nature of the short preseason. We’re four and O but we certainly have a long way to go in terms of playing at the level we want to play at on the defensive end. We got a lot of work to do.”

Today’s game had a little more meaning to the Lakers than any usual preseason games would. That is due to the fact that on this day three years ago, Lakers Legend Kobe Bryant had his jersey retirement ceremony. Cementing both the number 8 and 24 in the Staples Center rafters forever.

With the season opener coming around next Tuesday abasing the Los Angeles Clippers, the Lakers look exactly how many believed they would. They have the speed to run team out the building, the shooters to knockdown perimeter shots and the determination to play hard on the defensive end. To sum it up, the Lakers have one goal in mind and that is to play June for title number 18.

RECONSTRUCTED: A Preview of the 2020-2021 New York Knicks
Crowder is Ready for Mentor Role