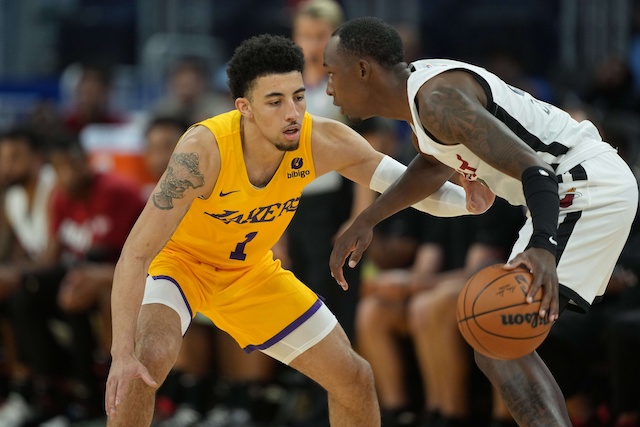 When the Los Angeles Lakers take the floor in Las Vegas for the NBA Summer League fans come out to support as if the game was being played at Crypto.com arena.

They played their first game in Vegas on Friday night against the Phoenix Suns and fell 104-84.

Current Lakers LeBron James and Russell Westbrook were in attendance to check out the talent on this roster as well as new head coach Darvin Ham who all sat courtside.

They got an up close look at the newest Laker and son of Hall-of-Famer Scottie Pippen, Scottie Pippen Jr. who was First-Team all ACC in his final year at Vanderbilt university.

He led the team in points and assists with 19 points and three assists.

He also had his former college coach and former NBA player Jerry Stackhouse also sitting courtside to watch his former player. He was asked about Pippen Jr. first half after scoring 15 of his 19, and that “ball security” would be critical for him moving forward at this level. He finished with a game-high five TO’s in 24 minutes.

Pippen has scored in double-figures in 3 of the teams 4 summer league games.

He had the crowd “OHHing & AHHing” in the game, but if he wants a realistic chance of making this team he has to show he can run the offense, and take care of the ball better than he did in his first game in Vegas.

Lakers Next Game: Sunday vs Charlotte